Somebody at Google is finally learning about one-handed smartphone usability; something that should have been obvious 15 years ago. Chrome may be getting a much better user interface soon.
Published 10 September 2019, 11:00 EDT

Google’s Chrome browser on Android has always had a pretty terribly designed user interface. Normally, the web page address bar was at the top and there was a hidden “traffic light” menu in the upper right corner for other functions.  As anyone who uses a smartphone would know, the top edge of the screen is basically the worst possible place to have interactive elements, especially when other interactive elements are at the bottom of the screen. No human hand can access both edges of a modern smartphone screen larger than 3.8″ while holding the device without re-positioning the hand or doing some crazy acrobatics or using two hands like a sucker. That’s just physics.  It should be common knowledge to place buttons where fingers can actually reach them, but with smartphone UI designers over the past 10 years, those usability basics have been lost.

Finally, we’re starting to see some resurgence of intelligence when it comes to user experience design.

Google Chrome 76 on Android has started bringing important browser navigational buttons to the bottom of the user interface just a row above the system navigational buttons and that’s a huge step in the right direction! The new interface has previously been hidden behind an experimental flag on the “canary” builds of Chrome for Android and its codename was called “Duet”. 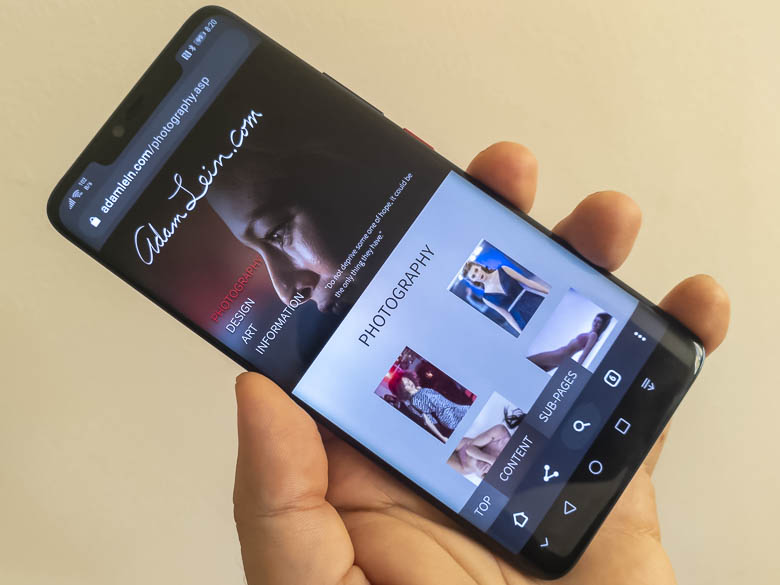 Other browsers have done this before on mobile devices of course. For example, Internet Explorer on Windows Phone was beautifully usable with one hand. Even the address bar was smartly at the bottom of the screen where you can reach it.  Microsoft Edge for Android also has a bottom row of navigation buttons in addition to a top row, but I think Google’s choice of bottom bar buttons is much more useful.

Well, maybe not the first one… which is an arrow pointing upwards and goes to your default startup page for the browser. The sideways V dots icon in the 2nd position brings up the “Share” interface, which is extremely useful!  Previously, I had to dig into the menus to find a share button.  Now it’s a one-touch function and that’s beautiful. Right in the middle is a circle-line icon that activates the URL address/search field at the top and brings up the keyboard right away.  This, again, is extremely useful!  With one easy short thumb movement, you can instantly start typing a URL or search term. No longer do you have to stretch to the top of the screen to do something with the browser!  The second to last button in the bottom bar is a square with a number in it.  The number indicates how many other web pages you’ve got opened within the browser. Tapping it brings up the vertical scrolling cascading flip board of open windows that you can subsequently scroll through in order to switch between open web pages.  This can all now be done with one hand and it is excellent! 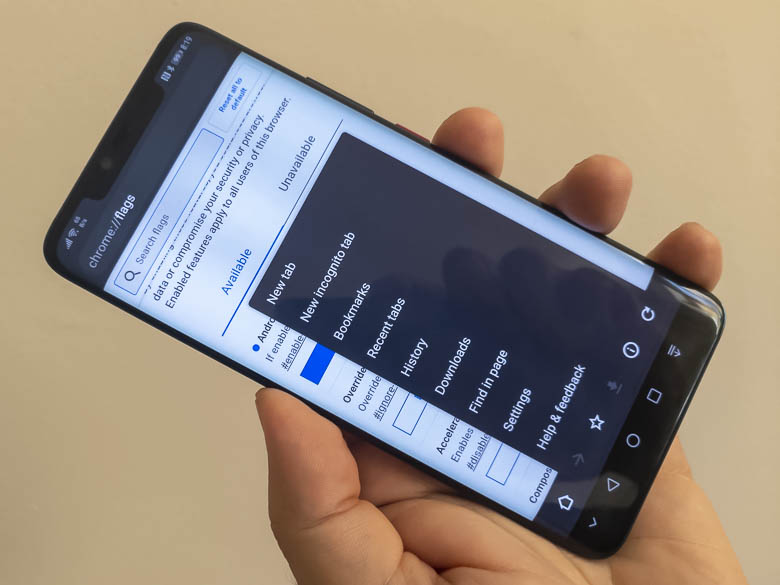 The “three vertical dots” icon on the bottom right brings up a “more” menu that gives you access to all of the other browser functions. This new menu nicely orients itself to the lower-middle part of the screen which, again, is much better placement for one handed usability.

While this is a huge, huge, extremely welcome step forward for browser usability on Android, there’s still a ways to go. For example, that bottom bar set of icons are still unintelligible to anyone who hasn’t already learned their functions through trial and error. As just about all usability studies concerning the subject, adding text labels to buttons so that people can understand what they do is always an improvement for usability.  See:

Luckily, Google has been experimenting with adding labels to this bar as well as there is also a “Chrome Duets Labels” hidden flag option in the experimental features. Really, those labels should be on by default with an option for users to remove them in order to free up space.

Another two aspects of user interface design that was very common and very useful in the 90’s but has also gotten lost among our modern novice user experience designers are the aspects of customizability and theming.  See “How to design an OS for the future.”

Now, the new version of Chrome 76 for Android actually does have some resemblance of a theming structure, but it only allows for two themes: dark mode and light mode. Obviously, that isn’t going to be as flexible and robust as a real theme structure would be, but it’s better than nothing. Unfortunately, Chrome’s dark mode uses a dark grey shade instead of the solid black color. The whole reason for dark mode is to make the majority of pixels within the screen inactive in order to use less electricity.

As for customizability when it comes to interactive elements like the bottom row toolbar, Android apps are still very very lacking in this area. Being able to customize application UI’s on mobile is even more important than on desktop computers since there’s so much less screen space to work with. Yet today we still can’t make our most important functions only one tap away in each app. We’re still stuck with the software designer’s poor decisions.

Thankfully, Google is starting to make some smarter decisions about user interface design though.

This new Chrome design doesn’t seem to be available for all users yet. They’re probably doing some public “A/B” testing instead of a smarter usability test.

The foldable iPhone will reportedly feature an 8-inch QHD+ flexible OLED display, with Apple expected to ship up to 20 million units.