Get the details on the long-overdue US arrival of gold Nexus 6P sales, and discover what’s new in the latest design changes for the Huawei Watch.

A new year means an opportunity for a new start, and what better way to prepare yourself for what lies ahead than a fresh makeover? Maybe for you that means new clothes, or losing that holiday-season weight, but for Huawei it means bringing some new looks to last year’s hardware, and it’s doing just that with both the Nexus 6P and its Huawei Watch wearable. 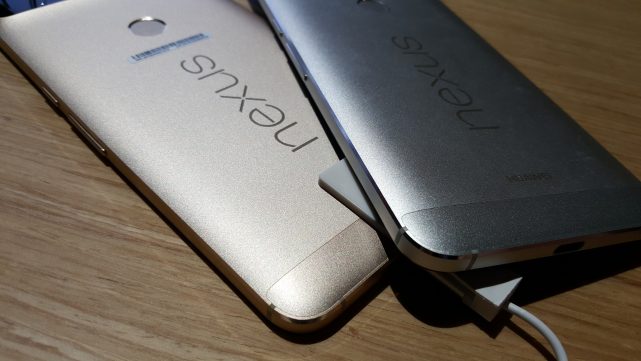 A couple weeks back we mentioned some rumors that the gold Nexus 6P, heretofore only available as an incredibly limited edition in Japan, could soon spread to other markets – and in particular, the US. Originally announced alongside its “aluminum,” “graphite” and “frost” counterparts, the gold Nexus 6P version arrives with no fancy nickname: it’s just the gold Nexus 6P. It’ll go on sale at the Google Store and Best Buy in both 32 and 64GB trims for the same price as the current Nexus 6P offering ($449/$499).

Next up is the Huawei Watch, which brings some updates to make it fit a bit better on feminine wrists. The new Huawei Watch Elegant sports a rose gold plating on its stainless steel body, with textured crosshatching on its bezel that reminds us a bit of that other round-faced Android Wear watch. The Huawei Watch Jewel takes things a step further with 68 Swarovski crystals embedded in a trench that borders the display, bringing a bit more bling to the smartwatch experience.

Both watches feature new 18mm leather bands offered in various colors, and new watchfaces designed to cater more to the female demographic. Those hoping for a slightly slimmer build will be disappointed though: both Elegant and Jewel sport the exact same specs as their less-blingy predecessors, including the hefty 11.3mm thickness. Pricing is still TBD, but the new watches are slated to go on sale later in Q1 at BestBuy.com, Huawei.com and presumably on the Google Store.