Global tablet shipments were down again in Q3 2017, but most top vendors were up

There’s no recovery in sight for worldwide tablet shipments, based on IDC’s latest research, even though the leading OEMs aren’t doing so bad.
Published 07 November 2017, 04:42 EST

Does anyone still care about tablets? Should we even care? Will detachable models like Microsoft’s Surface Pro and Apple’s iPad Pro families be able to save the market from extinction and surpass “traditional” slates in volume despite significantly higher prices?

Once again, global shipments are down year-over-year, this time by 5.4 percent, which actually compares favorably to a huge 14.7 percent annual decline in Q3 2016 numbers, but not so much to the 3.4 percent dip in Q2 sales.

Two thirds of the 40 million slates and detachables (convertibles not included) shipped between July and September 2017 came from the world’s top five vendors, leaving a shrinking 33.3 percent slice of the pie for the “others” category and helping consolidate the market at the expense of product variety. 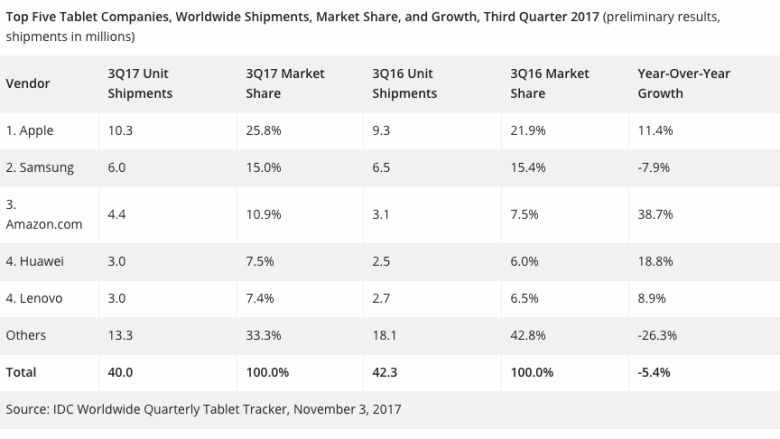 Interestingly enough, four of these top five tablet manufacturers reported Q3 growth in both sales and share, while Samsung dipped half a million units, nonetheless retaining its position behind leader Apple.

Of course, the gap between iPads and a relatively diverse lineup that however “still relies heavily on the lower cost Tab A and E series” has widened, from a little over six percent back in Q3 2016 to more than ten percentage points now.

In third place, Amazon’s ridiculously affordable Fires managed to surge from 3.1 to 4.4 million unit shipments and from 7.5 to 10.9 percent market share, with Huawei and Lenovo practically tied in fourth and fifth as they maintain a “similar strategy of focusing on low-cost devices in Asia/Pacific and Western Europe.” So, no, we have no idea if tablets have a bright future ahead of them (probably not), but right now, the name of the game is value for money.