While Apple’s steady overall profits during the year’s second calendar quarter (or third fiscal quarter) came as no surprise for people the least bit familiar with the Cupertino tech giant’s financial efficiency, it was a little unusual to see iPads singled out as star performers alongside “services”, aka iOS apps, Apple Music subscriptions and so on.

But is this a sign of unexpected recovery for the entire tablet industry or was the market leader the only one that achieved substantial growth between April and June 2017, thanks to new 9.7 and 10.5-inch models?

Well, the truth lies somewhere in the middle, as global tablet shipments took another year-on-year hit this past quarter, with three of the world’s top five vendors nonetheless able to boost their sales and share numbers.

In first place, Apple jumped from a 25.4 percent slice of the pie back in Q2 2016 to 30.1 percent now, which is almost double the stake of silver medalist and arch-rival Samsung. The latter’s eclectic mix of Windows and Android detachable products could only gain 0.4 percentage points in market share, from 15.4 to 15.8, while staying perfectly flat in terms of shipments, at 6 million units, no less than 5.4 mil behind iPads. 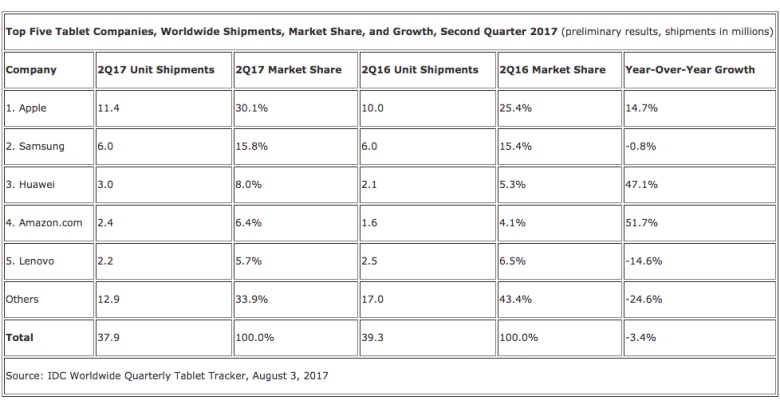 Huawei managed to take home the bronze medal mainly as a result of low-cost slate success, improving sales by nearly 50 percent year-on-year, with Lenovo’s budget-friendly options on the decline as a direct consequence. But Lenovo may have actually increased its profitability, despite falling to fifth place and selling 2.2 million tablets, compared to 2.5M a year ago.

That’s probably not what we can say about Amazon, the quarter’s biggest volume winner, which continues to rely on ridiculously affordable Fires generating super-slim profit margins.

All in all, the market dropped 3.4 percent year over year, to a total of 37.9 million unit shipments, which surprise, surprise, is up from 36.2 mil in the January – March 2017 timeframe.