Global tablet sales are down for the tenth consecutive quarter, led by struggling iPads

Water is wet, the sky is blue, Samsung sells more smartphones than any other company in the world, and Apple dominates the tablet vendor rankings. What’s new, you ask? Well, Chinese OEMs like Huawei, OPPO and Vivo continue to gain on the mobile hardware industry’s silver medalist as iPhone volumes shrink, and iPads aren’t doing great at the top of the slate charts either.

Of course, slates in general have long passed their popularity peak, and with detachables still on a slow growth pace, the global tablet market has just reported its tenth straight year-over-year decline in quarterly shipments.

We’re talking 36.2 million units sold worldwide between January and March 2017, down 8.5 percent from a 39.6M tally during the same timeframe of 2016. Apple’s iPads accounted for almost 25 percent of those 36.2 mil tablet shipments, which equates to 8.9 million units, or 1.4M less than the previous year’s opening quarter total. 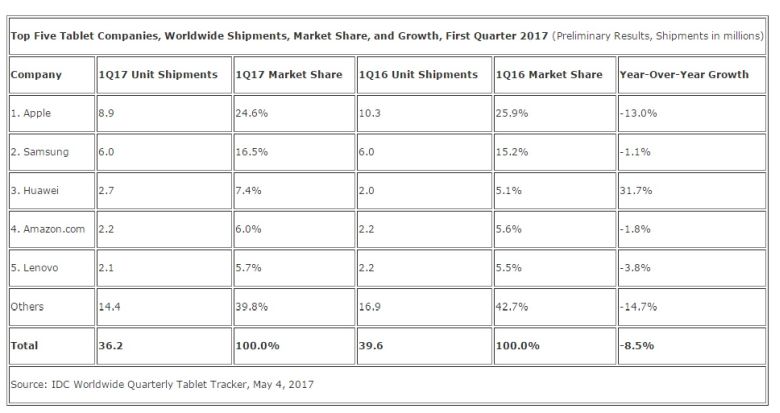 In second, fourth and fifth place, Samsung, Amazon and Lenovo respectively posted marginal sales reductions, actually boosting their shares to 16.5, 6 and 5.7 percent. Meanwhile, the uncontested winner of Q1 2017 was Huawei after a sudden surge to the bronze medal spot, with 2.7 million unit shipments and a 7.4 percent slice of the pie, up from 2M and 5.1 percent.

No Microsoft in the manufacturer top five, as the best strategy these days appears to be a “mix” of traditional Android slates and Windows 2-in-1s covering as many price brackets as possible.