Samsung and Apple land on top of Q2 global smartphone sales, but Huawei, OPPO and Xiaomi all creep up

It’s been a bittersweet second quarter for industry leaders Samsung and Apple in global smartphone sales, as a trio of underdogs threatens the duopoly.
Published 02 August 2017, 05:27 EDTUpdated 02 April 2021, 13:31 EDT

This is a little unusual, but we had to wait for Canalys to compile regional Q2 2017 smartphone shipment reports covering the world’s two largest markets over the past week before fellow research and consulting firm Strategy Analytics could release its latest global numbers earlier today.

As always, the dynamic of the mobile device industry viewed as a whole differs significantly from the vendor status quo in China or India. Still, Samsung can flaunt two of three essential crowns, once again comfortably leading the worldwide manufacturer chart in terms of unit sales, along with easily taking home India’s trophy.

Then again, the champion’s market share actually dipped from 22.7 percent in Q2 last year and 23 percent this Q1 to 22.1 percent now, which isn’t exactly the most encouraging trend. Apple enjoyed a similarly bittersweet quarter, marginally improving estimated sales to 41 million units while slipping to an overall 11.4 percent slice of the pie. 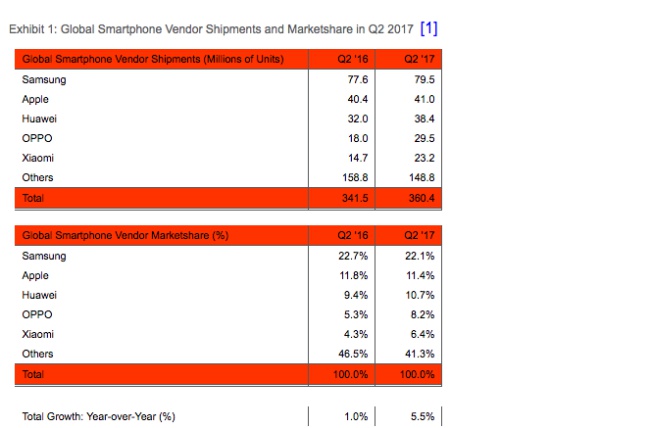 Of course, the highly anticipated iPhone 8 is yet to come, which doesn’t completely soothe Tim Cook’s concerns of soon falling behind Huawei as far as mobile hardware volume goes.

The increasingly ambitious Chinese OEM further closed the gap between third and second place these past 90 days, from 2.4 to 0.7 percent, with its smartphone shipments impressively boosted from 32 to 38.4 million units year-on-year.

Believe it or not though, Xiaomi, not Huawei, was the quarter’s star performer, regaining its fifth spot after a year spent fine-tuning company strategy, with 23.2 million unit shipments and 6.4 percent share, up from 14.7M and 4.3 percent respectively.

But OPPO is worth more than a bit of praise too, staying in fourth place and taking share from “major rivals” like ZTE and LG to surge to 29.5 million smartphones sold. All in all, the market grew 6 percent annually to 360 million units, which is pretty good by recent standards, though it’s a measly 2 percent improvement over the Q1 2017 tally that didn’t include fresh flagships like the Samsung Galaxy S8, HTC U11 or LG G6.