Get Ready To Charge Your Galaxy S III … Wirelessly

We’re going to be living in the future. We’ll be able to come home, drop our Samsung Galaxy S III on an energy mat, see a reassuring light flash on, and know we’re being topped-off. It’ll be super-futuristic (or it’ll give you flashbacks to 2009, depending on whether you were a Palm customer or not).

Around these parts, we’re no strangers to wireless charging. We’ve been talking about inductive recharging for a while now, and with a webOS expat like me onboard, that’s no surprise. Palm pioneered wireless replenishment as an out-of-the-box feature in its Palm Pre Plus and subsequent devices, and even though it’s been nearly three years since, other manufacturers have been slow to incorporate similar technology into their products. Even though standards like Qi, sprung from the loins of the Wireless Power Consortium, have picked up steam since, we still haven’t seen huge adoption of third-party inductive-charging pads. Whether it’s Energizer, Duracell, or Powermat, the products aren’t flying off the shelves.

Samsung aims to change that with the Galaxy S III, which it graced with the ability to charge wirelessly. When Samsung announced this feature at the Galaxy S III’s official unveiling in London, I was pretty stoked about it. The South Korean giant was the first big-name OEM to throw its weight behind built-in inductive charging, and I specifically called out the feature in my post-announcement roundup. Maybe it wasn’t the magical long-distance charging we’d heard whispers about, but it was definitely better than nothing.

Since the GS3’s release, we’ve been awaiting some of the features Samsung teased us with in London. The “S-Pebble” mp3 dongle is still nowhere to be found, for instance, and the wireless charging accessory is similarly missing. While I’ve enjoyed messing around with location-aware TecTiles to customize my Galaxy S III experience, what I’d really like is to eliminate these pesky USB charging cables from my daily routine. When can I finally burn the bridges between me and the “wire and cable lobby” I’ve complained about before?

From all indications, it looks like we’ve only got a month to go before that dream blossoms into reality. Come September, we’ll have not one, but two options available. And they’re coming from each side of the OEM/aftermarket divide. 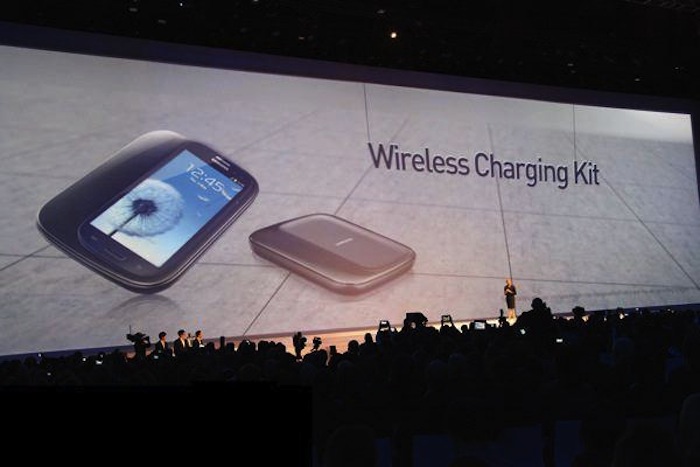 There hasn’t been much new to report about the official, Samsung-sourced wireless charging solution since May, and even then the news wasn’t great. The charging kit, consisting of a tabletop charging pad and a special battery door for the handset, wasn’t presented as part of Samsung’s London unveiling- not even a floor demo was available for press covering the event. At that time, SlashGear confirmed with UK retailer MobileFun that wireless charging solutions for the Galaxy S III wouldn’t become available until September.

In the interim, some impatient and crafty modders got to work, breaking out their soldering guns and adapting the Galaxy S III’s battery cover to work with some old Palm technology. The Touchstone charging dock, originally built for the Pre and Pixi series, seems to have no trouble throwing some volts all up into a Galaxy S III in this video:

That ingenious modification will likely prove popular with modders and tinkerers -unsightly bulge notwithstanding- but for an official wireless charging solution, we’re forced to wait until September. As a reward for our patience, though, we’ll also be graced with an aftermarket alternative. 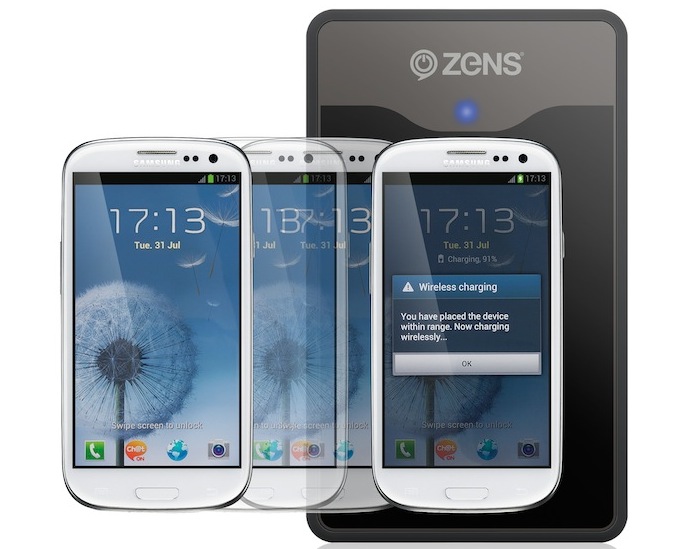 Announced just today, the ZENS wireless charging pad for the Galaxy S III should launch in September. As one might expect, its design and operating principles fall closely in line with the projected Samsung equipment, as well as existing products like the Powermat. From ZENS’ press release:

As Stephen Schenck notes in the above-linked news post, the “ZENS battery compartment door” required to provide charging functionality is color-matched to the phone, but it’s also emblazoned with the ZENS logo. That might be annoying to some, but I know I’d be perfectly willing to make the tradeoff, especially given the ease-of-use ZENS promises.

We’re going to be living in the future. We’ll be able to come home, drop our phone on an energy mat, see a reassuring light flash on, and know we’re being topped-off. It’ll be super-futuristic (or it’ll give you flashbacks to 2009, depending on whether you were a Palm customer or not).

As for the reasoning behind Samsung’s delay, there’s plenty of speculation out there. The most plausible theory comes from SlashGear, which sees a possible connection between the pushed-back release date and Samsung’s membership in the Alliance for Wireless Power. The aforementioned Powermat is also a member of said Alliance, and it may be telling that the former hasn’t yet announced support for the Galaxy S III. It’s possible that the “official” Samsung-provided wireless charger may bear Powermat co-branding upon its release. Only time will tell.

In the interim, I’ll be keeping an eye out for further developments in this accessory story, one which has the potential to add an even more potent differentiator to the Galaxy S III’s already-lengthy list of unique features. And maybe -just maybe- I’ll break out my soldering iron and see if I can dig up one of my old Touchstones.