Where is my GDR3 notification center?

Have you ever had that feeling that something is missing? It should be something so obvious, when you walk in the room, that it hits you in the face like a frying pan in a bad marriage. And yet, you just can’t put your finger on it. It’s that dangerous question that a wife asks her husband – “Notice anything?” – and you know there’s something different, but you just don’t see it? Microsoft has that feeling right now. Or at least it should. Or else it should be hit in the face with a frying pan.

The power of three

GDR3. Just think about that for a second. Gee Dee Arr Three. Notice anything there? Relax, I’m not your wife. I’ll tell you what you should notice. It’s the ‘three’ part. That means this is the third major update to  the Windows Phone 8 operating system. And that’s just Windows Phone 8. We’re not even talking about Windows Phone 7, 7.5, or 7.8.  Well OK, now we are. So let’s count them down, just to see how it looks on paper (or electrons if you’re from this century):

It’s the same thing. Only it’s not.

Some purists, including those living in Redmond, point to live tiles and exclaim, “What more do you need?” Well, see here’s the thing. Not every app that gets a notification warrants a live tile in my world. I get plenty of Words with Friends pings when it’s my turn to lay the smack down, but I don’t keep a live tile on my home screen full time. Also, I don’t always jump right into the live tile to see what the notification is. Let’s say I already have new emails in my linked account and in my personal account, and I don’t remember what numbers were on there before. Then my phone beeps in my pocket. Well, which tile do I need to look at? Oh, Twitter.  Right.

So live tiles are not the answer. They are great for what they are. I mean who doesn’t love weather or calendar or number of new emails at a glance? It’s pretty cool. I like live tiles. Please don’t misunderstand. But going back to “What else do you need?” The answer to that question is as obvious as that frying pan which inexplicably keeps coming up in this conversation.

It’s not hard. It’s just a collection of what comes up on the flip side of those flippy tiles. It’s been the most frustrating omission from an otherwise great platform. It’s just so easy to see. It’s so easy to realize. Not having a notification center is a crippling omission. Especially consider what certain competitors whose logo is a green robot are doing with notifications. 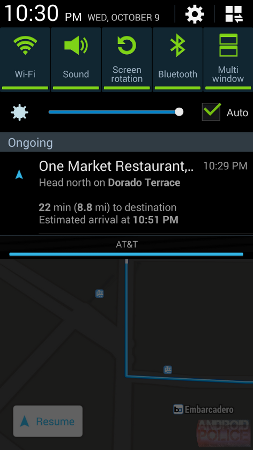 Every time I pick up my GSIII and play some music, it’s like a kick in the part that mommy said never to touch. There are playback controls in the notification center. Yes, I know Windows Phone has this too, in a different area. Kinda sorta, but not really. But also consider that the Android Facebook app notification shows me how many updates, friend requests and private messages I have. The navigation app shows me my next turn and time to destination. There’s a lot of information there that Microsoft is choosing to omit, and it’s not cool. Bad Microsoft! No cookie!

It all comes back to the user experience. While the UI on Windows Phone is, in my humble opinion, the best out there, a notification center is the one major thing missing. If I were alone on this, I would hop down off my soapbox and call it a day. But I’m not. There are thousands of users and hundreds of tech writers just like me all beating their war drums over the same thing. And we’re being ignored. We don’t need a “drive mode”, especially one as limited as Adam Lein showed us in his walk through. We need a notification center if for no better reason than so we can catch up to the rest of the smartphone toting world.

Wishing and hoping and thinking and praying

I guess we’ll just have to hope that this is in the cards for Windows Phone 8.1, or whatever it will be called in the next major update. But then again, we’ve been hoping for this since Windows Phone 7.5. No reason to think our drought will end with the next release. I guess I’ll be happy as long as Microsoft gets it out the door before the Cubs win the World Series.

I’d write more, but my phone just beeped and I have to go open 20 different apps to figure out why.