Samsung has been making tablets since the second half of 2010, trying to close the gap between its own market share and the current tablet market share leader, Apple. Currently, Apple holds a 36 percent share of the tablet market. The only manufacturer even remotely threatening Apple’s share is Samsung, which currently holds 19.1 percent, according to Gartner. 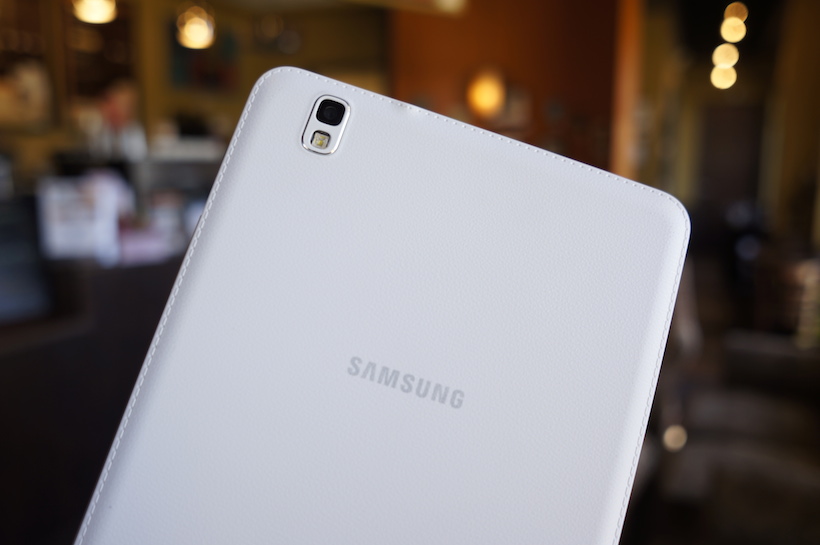 We speculated these tablets might be susceptible to the very same problems which have plagued virtually all Android-powered Samsung tablets to date; Michael found the Galaxy TabPRO 10.1 to have a host of performance issues. But what about the Galaxy TabPRO 8.4? Is it a different story?

We’ve used the Galaxy TabPRO 8.4 for seven days now, and below are our thoughts. 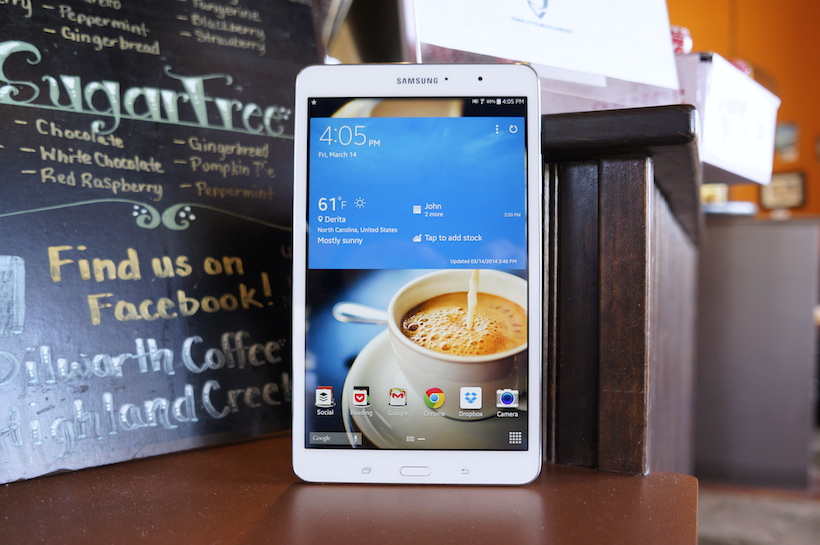 For all intents and purposes, the Galaxy TabPRO 8.4 is a scaled-up version of the Galaxy Note 3. 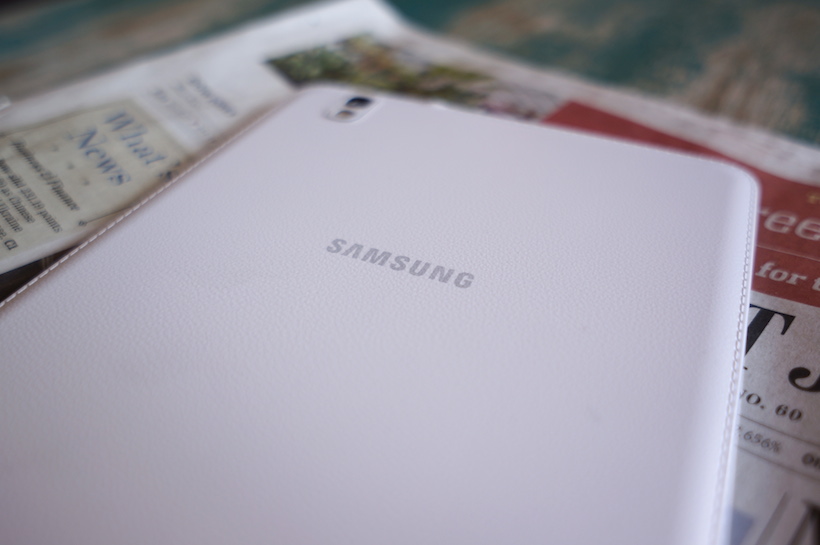 The backside features the same black or white options, which come with a leather-like finish, and fake stitching lines the perimeter. The outer edges are lined with a plastic trim, which mimics brushed metal. And the front is light on bezel, but it features a familiar hybrid navigation button configuration – a physical home button in the center, flanked by capacitive buttons for recent apps and back functions.

The tablet is extremely lightweight for a tablet of this size – just 331g, the exact weight of the iPad mini with Retina display. And, comparatively, its physical footprint is quite small. It measures 219mm tall, 128.5mm wide, and a mere 7.2mm thick. In fact, it’s so thin, there is not only a camera hump, but there are also bumps for both the microUSB port and 3.5mm headphone jack. It’s also just wide enough to palm comfortably, yet it doesn’t feel awkward or wrong using it in landscape or portrait, which is often the case with tablets either with 16:9 or 16:10 aspect ratios. 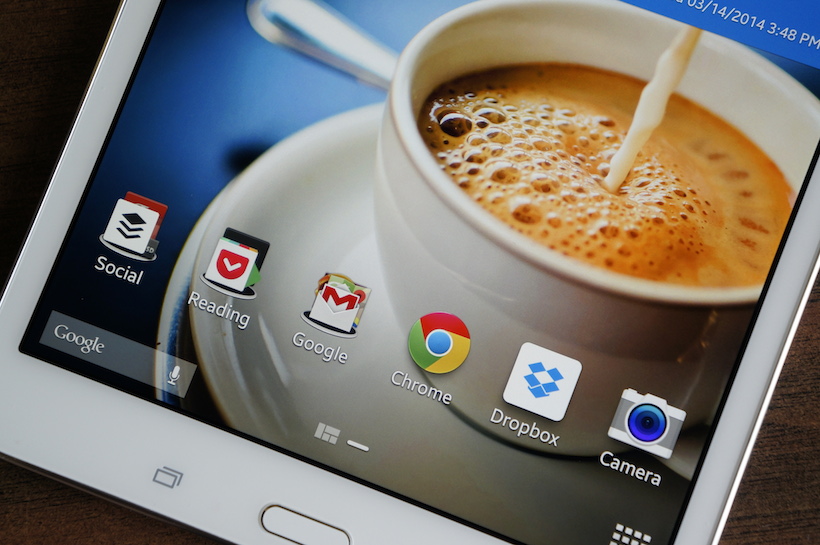 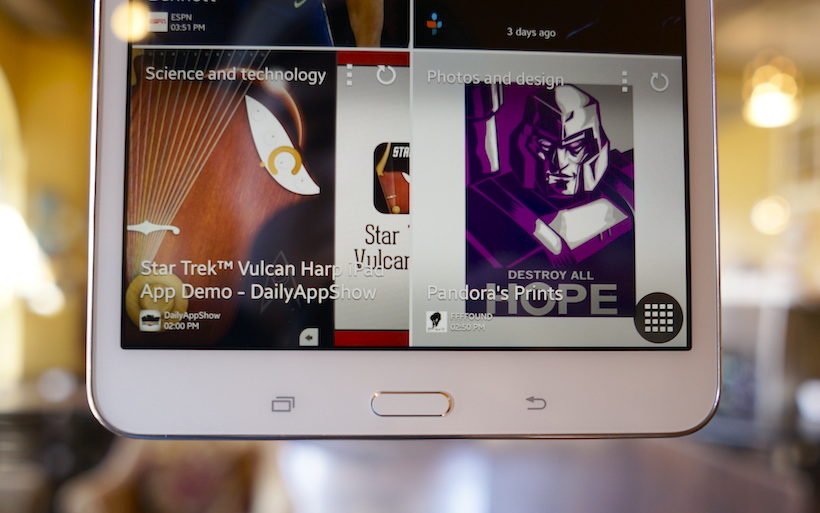 But if none of this is enough to get you excited, the display certainly will. Measuring 8.4 inches diagonally, it bears an impressive QWXGA resolution, or 2,560 by 1,600 pixels. That’s a pixel density of 359 pixels per inch. It provides relatively inky blacks and respectable contrast, great side visibility, and it’s blindingly bright. We could rarely stand any brightness setting above approximately 50 percent.

The sharpness of the display is noteworthy. It’s easily one of the best looking tablet displays to date, but it’s also worth pointing out that Samsung seems to be boosting saturation. Specifically, skin tones looked more red or pink than they should be in video playback.

While the internals are about as good as it gets, the hardware – even in this particular price range – isn’t the nicest we’ve ever seen. We weren’t expecting to see the fake leather on the TabPRO line, and as our own Michael Fisher stated, “the Moleskine metaphor doesn’t hold up as well without the Note name.” 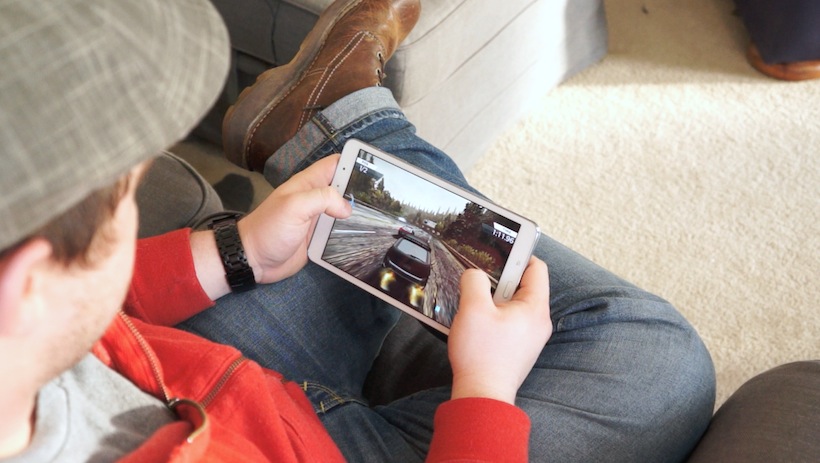 That said, due to its natural feel in either orientation (portrait or landscape), we’ve really grown quite fond of the size and shape of this particular tablet. It squeezes in a significantly larger display than, say, the Nexus 7, without being too large to throw in a jacket pocket. Put simply, it’s quite an enjoyable size. And for us, that helps offset Samsung’s penchant for imitating materials. 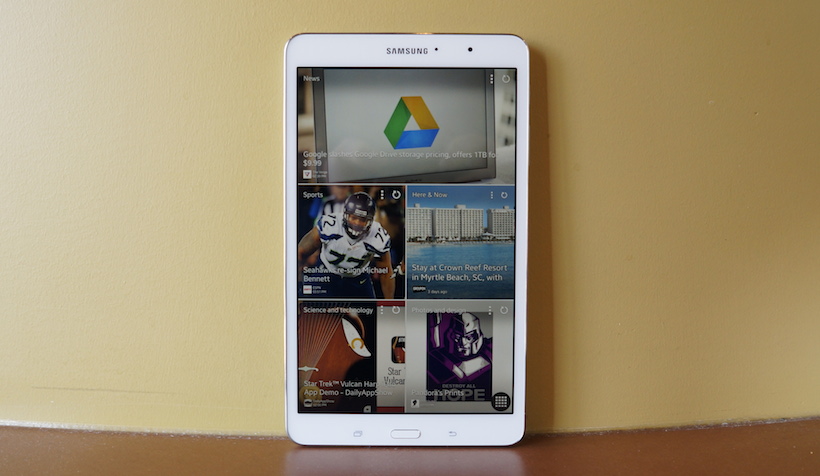 The software is an entirely new conundrum. The Galaxy TabPRO 8.4 is running Android 4.4.2, KitKat, beneath Samsung’s new Magazine UX, which we first saw (officially) at CES. 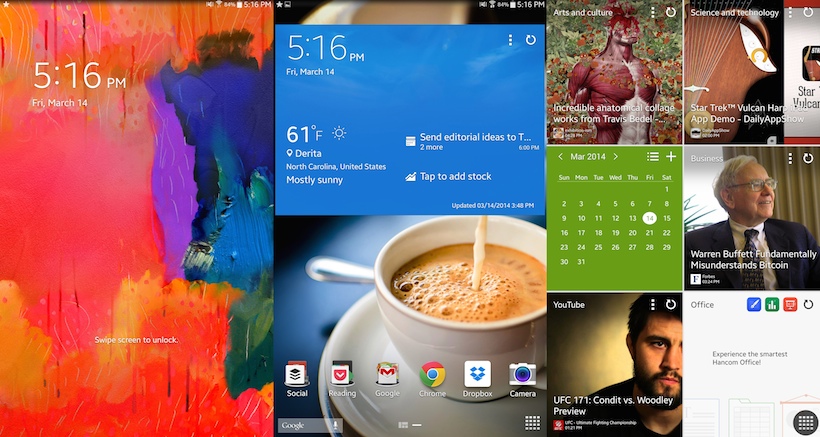 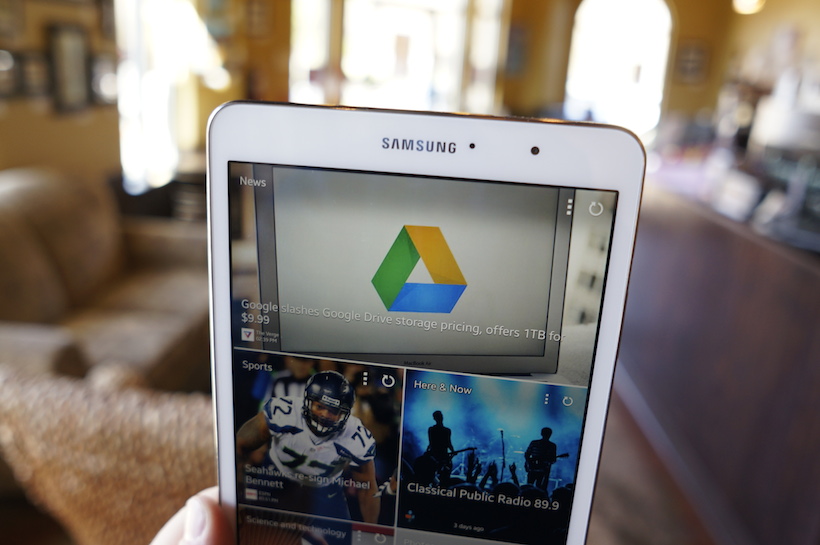 At first glance, it appears to be a marked improvement over past versions of TouchWiz. UI elements seem tighter, neater, and cleaner. The home screens have been altered with multiple, Flipboard-powered pages, with user-definable tiles, such as tech news, a calendar, YouTube subscriptions, and much more. The standard home screen still exists, as does the standard, Samsung-style app drawer. You can add and remove new tiles, which will auto-fill and and arrange themselves based on how much space is available. And, of course, you can rearrange tiles until your heart is content, as well.

For what it’s worth, this new Magazine UX looks very nice. But it’s not nearly as functional as it first may seem. Primarily, the tiles have to be manually updated. There is no option to have tiles automatically refresh. We were told this was an executive decision made by Samsung in the favor of battery life. Fine. What’s more, however, is that each tile has to be updated individually. If you have the standard six tiles per page, by default, that’s 12 tiles you have to separately update. At that point, it’s easier and much quicker to simply open the Flipboard app and work through your feeds natively. 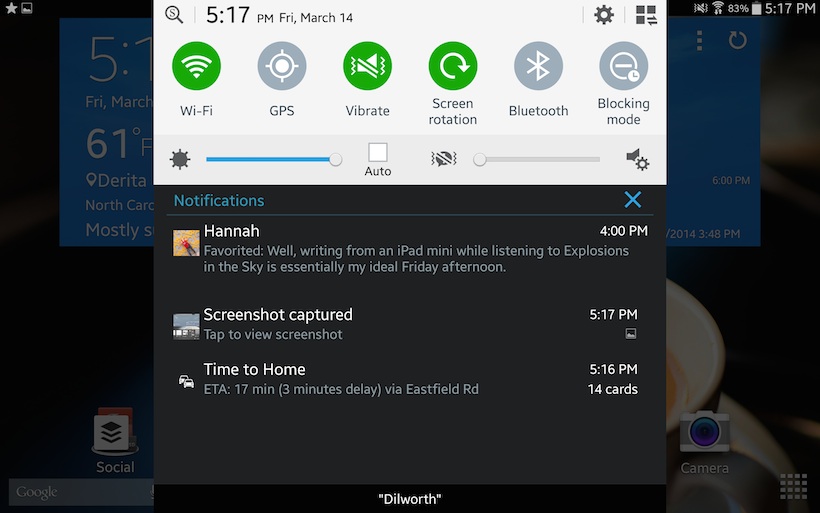 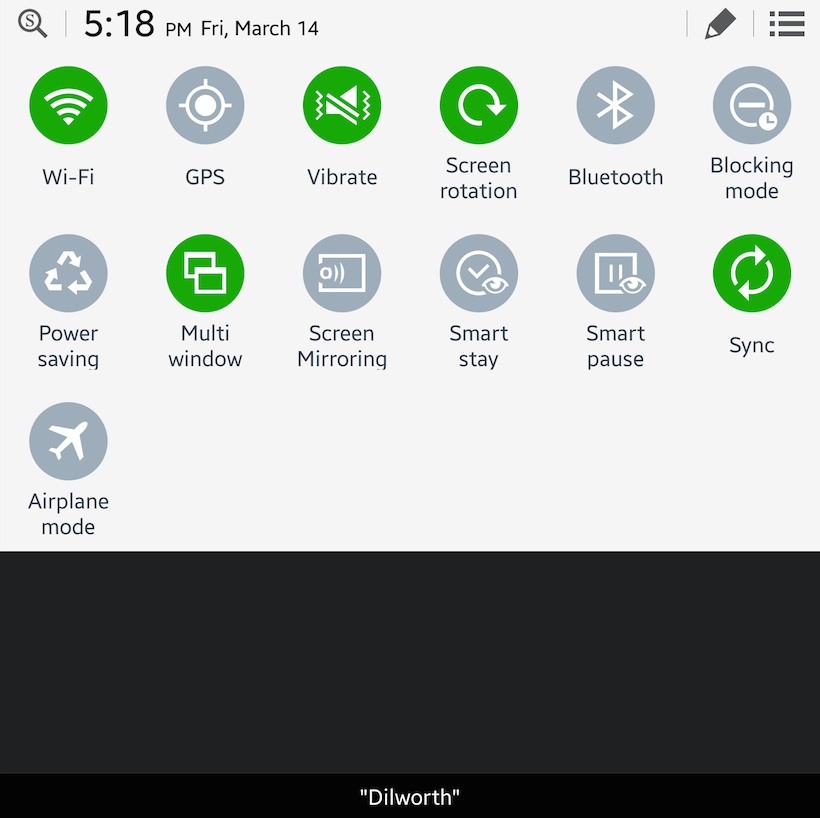 Samsung has also updated the notification shade and Settings app with new icons and a slightly altered appearance. The Settings app is still both tabbed and paned, and it’s no easier to navigate. The major change within Settings are the new Tizen-inspired icon set and the trimming of some “Smart” features; Samsung chose to only include Smart stay, Smart rotation, and Smart pause. There are no Air Gesture controls. And the notification shade, at least in landscape mode, is no longer full-screen and is center-aligned.

However, throughout our entire time using the tablet, we’ve found the software felt unfinished. Rather than seeing the changes all the way through or axing the entire UI change, it seems as if Samsung hit the brakes at the 50 or 60 percent completion mark and pushed the product out anyway. The main home screen and app drawer still feel like the run-of-the-mill TouchWiz interface, while the pages to the left and right are tile-based and utterly cumbersome to use, and the Settings application is standard TouchWiz with a Tizen spin.

We can only speculate that this may have something to do with the deal Samsung penned with Google. Regardless of the actual reason, it feels unfinished and conflicted.

On a lighter note, Samsung has changed (and improved) the way users access Multi-Window, the split-pane simultasking feature. Instead of long-pressing the back button to activate Multi-Window and pulling the visual tab to expand the Multi-Window dashboard, users now swipe from the right edge of the display. Outside making it quicker and easier to access, the feature functions exactly as it used to – that’s a good thing. 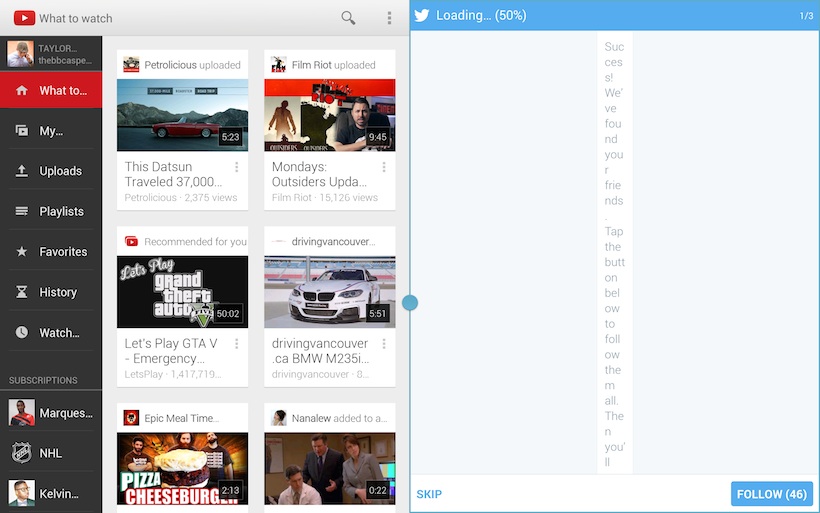 Michael also discovered an issue with some apps in Multi-Window in landscape mode. Twitter and YouTube, in particular, suffer from layout issues, though they work perfectly fine in portrait.

It’d be nice to see the Magazine UX more usable, since it does look quite nice; the ability to customize sync settings would be ideal. Instead, the user experience suffers from the lack of functionality and options.

Overall, we’d say the software has improved, but there’s still plenty of room for Samsung to mature and improve its software much further. 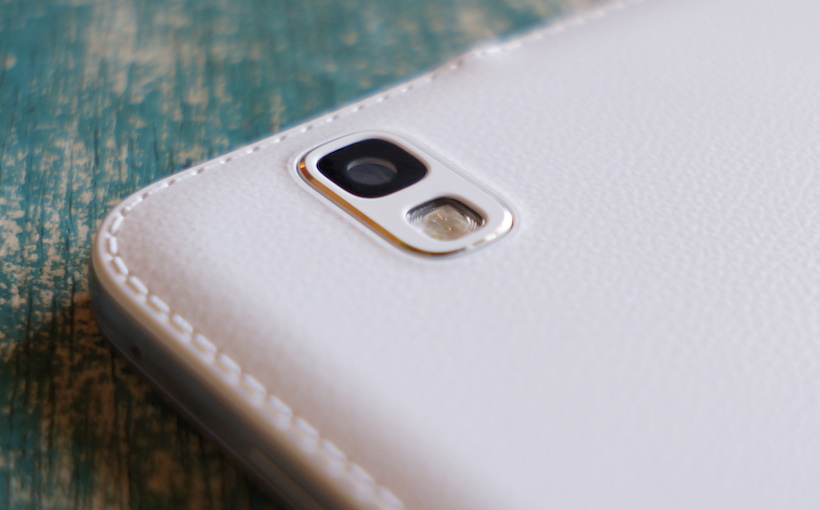 Don’t set your expectations too high if photography is something you plan to be doing with any tablet, let alone the Galaxy TabPro 8.4. Tablet cameras are not only awkward to use, they typically don’t have the same image-taking chops as their pocket-sized counterparts.

The TabPRO 8.4 is no exception. It can take some decent pictures, if the lighting and conditions are just right. It provides decent contrast, a fair amount of detail, and it errs on the warm side of the temperature scale. We were able to get some acceptable shots, but all the images were a far cry from the sort of images you’d expect from the Galaxy S 4, iPhone 5S, or a like-equipped camera.

Odds are, the smartphone in your pocket will take much better pictures.

Such is the case for the video, too. Colors appeared more vibrant in video capture than with stills, but contrast was noticeably worse, and the audio was just passable, not terribly mind-blowing. In other words, it’s par for the course. 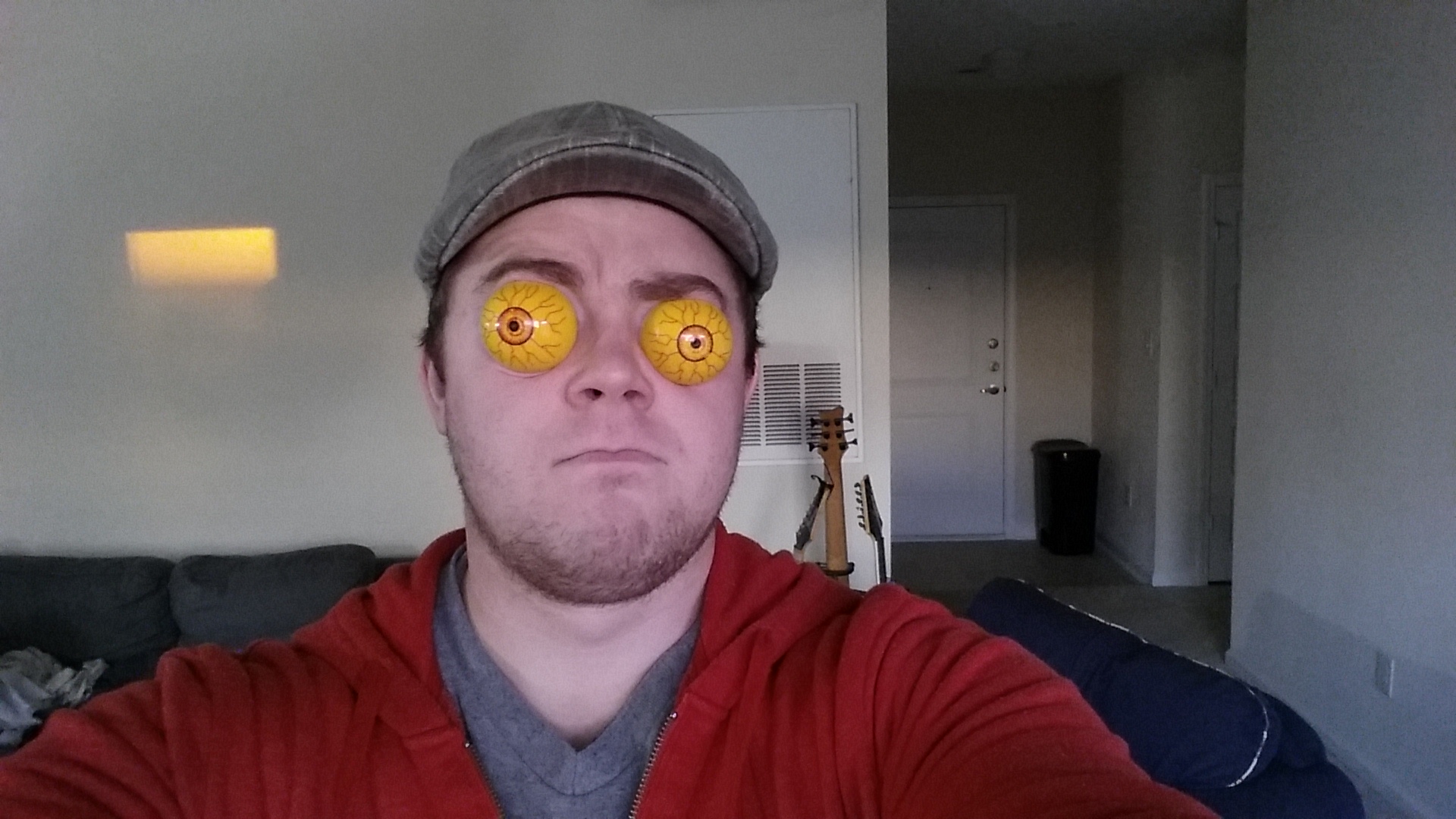 To no surprise, the front-facing camera wasn’t worth writing home about either. 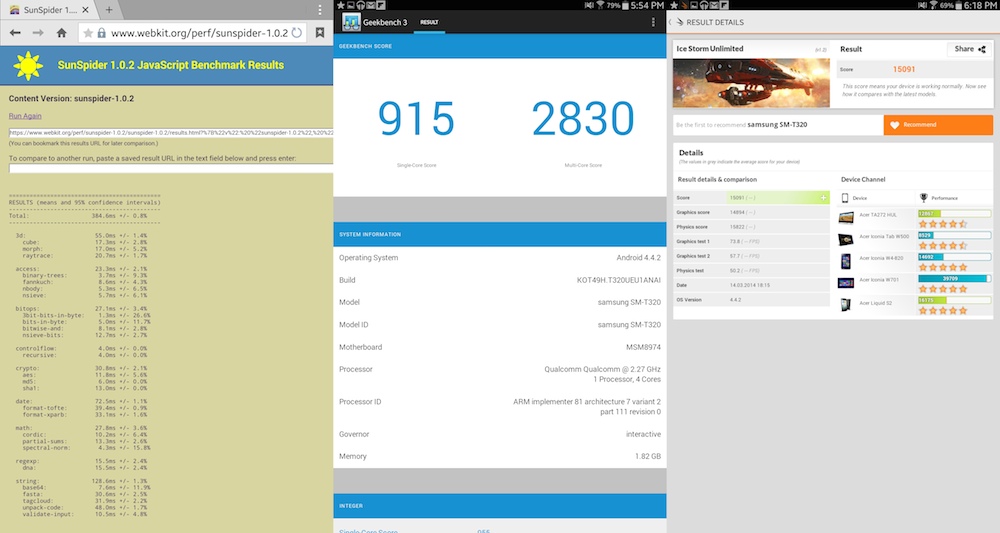 Performance is a tricky topic when it comes to the Galaxy TabPRO 8.4. We had high expectations for this version of TouchWiz paired with the Snapdragon 800 SoC, and for what it’s worth, we’re not completely disappointed with the tablet’s performance.

Gaming, day to day tasks like note taking or Web browsing, and even graphically-intensive stuff, such as watching a YouTube video while browsing Twitter, was buttery smooth. We ran into few to no instances of lag or stutter in the most intensive multitasking we could throw at the tablet. 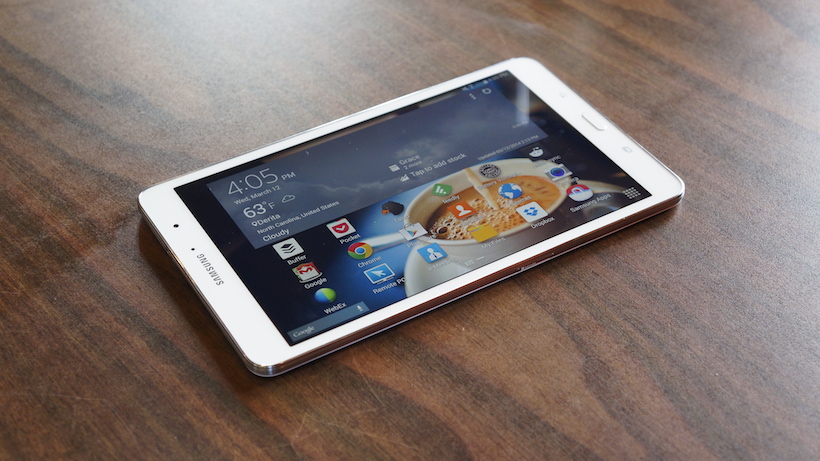 However, we could essentially create lag on demand by doing one, simple thing: returning to the home screen. Unlocking the tablet and flipping through the home screens, it works just fine with no problems. To change that, open an app (any app), return home, flick left or right, and wait. Nine times out of 10, this caused a pair of split-second stutters (once for each Magazine UX page). After the short pauses, you can flick through the home screens as quickly as you please.

Unlike Michael’s experience with the Galaxy TabPRO 10.1 (powered by an Exynos chipset, not the Snapdragon 800), this was the only replicable instance of lag or performance hiccup we had throughout our time with the tablet. Outside that, benchmark performance was great, as was standard use. And gaming, in particular, was a fantastically pleasing experience, due to the ultraportable size and weight, the high-density display, and the Snapdragon 800. In fact, this was one of the most enjoyable gaming experiences we’ve had on a tablet to date. 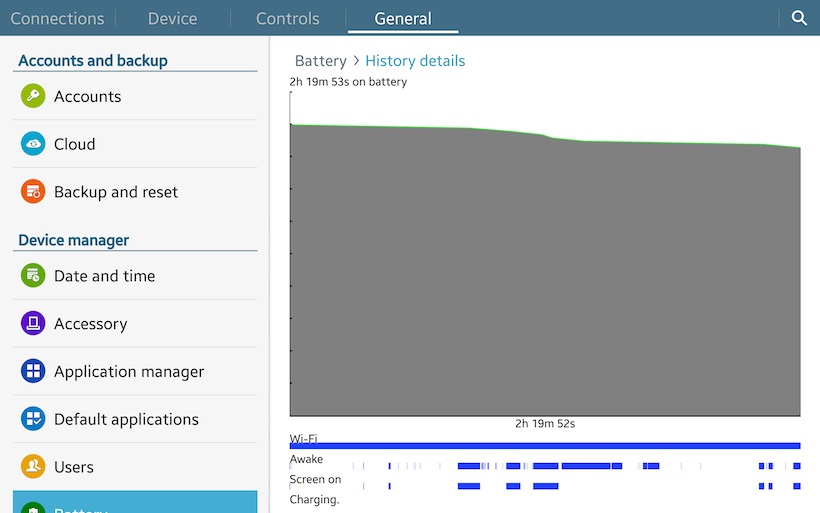 It’s important to note one thing about the media viewing and gaming experience, though: the speakers. The Galaxy TabPRO 8.4 does have stereo speakers which are relatively loud, albeit light on the bass response – nothing surprising there. With both speakers being positioned on the bottom edge of the tablet, however, they don’t create great stereo separation. And if you have the tablet in landscape mode, as you most likely will when gaming or watching videos, your palm and thumb will quite easily muffle – if not entirely cover – the speakers. We recommend using headphones for just about all multimedia consumption.

The battery life is a much more promising aspect of this mid-sized tablet. The battery is rated at 4,800mAh, or 19.2Wh. In our experience, the tablet has no problem lasting a full day-plus. We averaged one and a half to two days per charge cycle, though we don’t feel it would be terribly difficult to kill the battery in a single day thanks to how bright the display gets, and the heat that begins to build as you play resource-intensive games like Asphalt 8 or Need For Speed: Most Wanted. 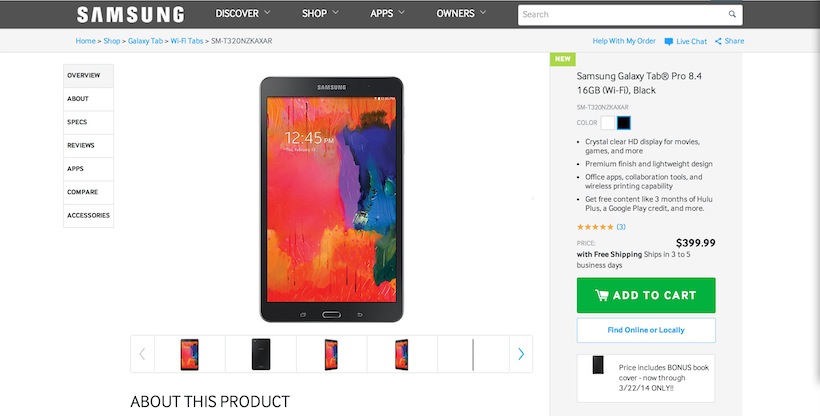 The Galaxy TabPRO 8.4 is currently only available in 16GB with Wi-Fi. Pricing starts at $399.99 plus applicable taxes, and can be purchased from Samsung and third-party retailers. An LTE-capable version was also announced, but no official launch date has been released. 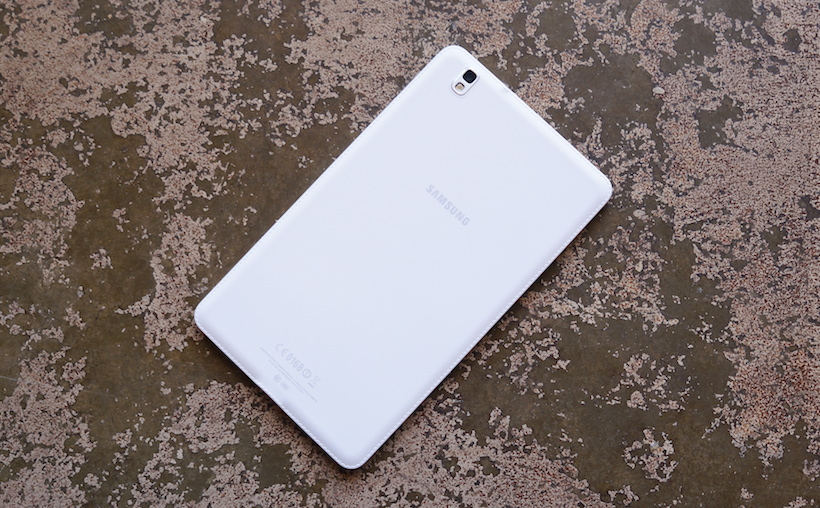 In all, the Galaxy TabPRO 8.4 is an impressive little tablet. The power and beautiful display it packs into such a compact package are praiseworthy, even if we would prefer to see Samsung up its game in terms of materials used or the cohesiveness of the software.

If you can deal with a small instance of lag each time you return to the home screen from within an application (we suggest trying a third-party launcher like Action Launcher or Nova Launcher), the Galaxy TabPRO 8.4 will be a fantastic choice. It’s priced appropriately – the same base price as the iPad mini with Retina display, for which it is a direct and stiff competitor. All things considered, we give the Galaxy TabPRO 8.4 an 8.5 out of 10. 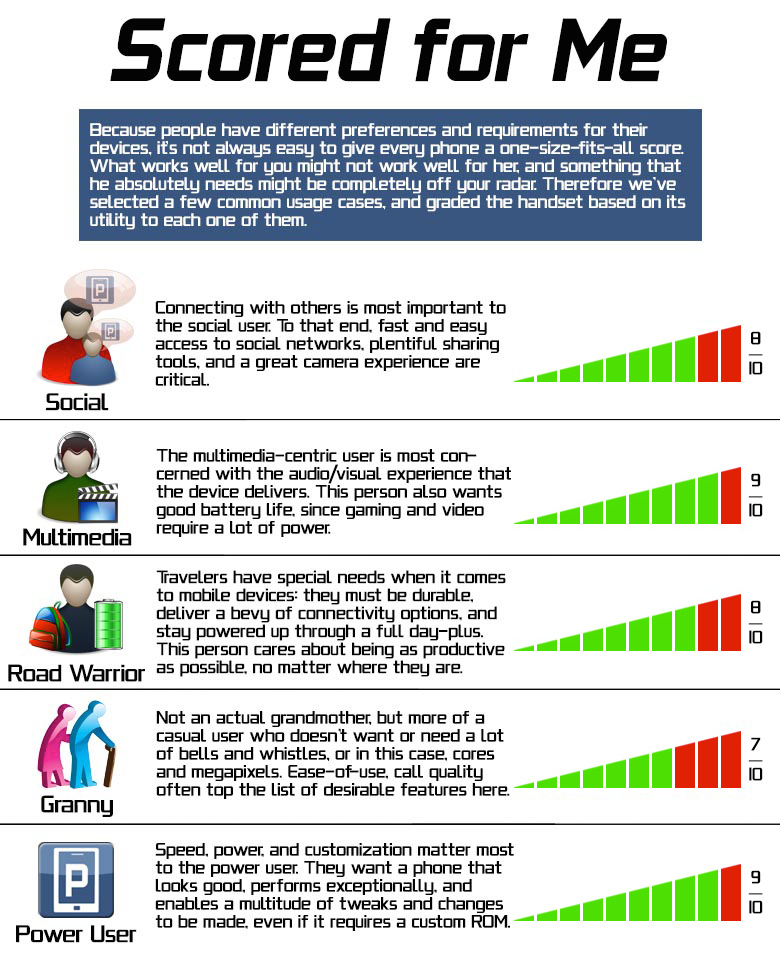