More than any other smartphone manufacturer out there, Samsung has a reputation to maintain at Mobile World Congress. Each winter, we look forward to seeing it reveal its latest flagship Android. Leaks and rumors surrounding the Galaxy S7 have been coming in fiercely over the past few months, giving us a really solid sense of what to expect from the hardware. And now today, in Barcelona, we finally step past all that and get to remove any lingering uncertainty: the Galaxy S7 and Galaxy S7 edge are here.

Enthralled by all the hardware upgrades rumored to grace the GS7? We’ve got good news, because the majority of them look to be panning out. For starters, there’s the always-on display we were told to expect, letting you catch up with your notifications without needing to stumble through a lock screen.

And microSD expansion? That’s back, just as rumored, with a hybrid SIM/SD tray giving users access to removable storage. 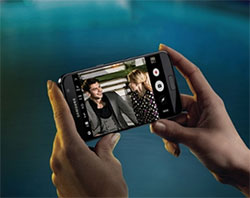 Another big returning feature – one that skipped the GS6 – is water resistance, with both phones scoring an IP68 rating against water and dust.

How about that camera? Just as foretold, Samsung’s cutting its raw megapixel count to focus on image quality, giving both the GS7 and GS7 edge a 12MP Dual Pixel sensor – one it says should optimize low-light performance in concert with the camera’s quite large f/1.7 aperture. And with OIS, your pics should be nice and sharp. Up front, we see another f/1.7 aperture, this time with a 5MP sensor.

Batteries are just as large as we hoped, with the GS7 getting a 3000mAh component, while the GS7e goes all out with a 3600mAh battery. Both phones support wireless charging.

We could keep going on about features, but how about some raw specs? Much of this has been leaked already, but for the sake of confirmation, the Galaxy S7 packs a 5.1-inch quad HD OLED screen, while the GS7 edge gets a 5.5-inch panel. Both phones will get 4GB of RAM, and options for 32GB or 64GB internal storage. They’ll ship running Android 6.0 Marshmallow, including some of the first support for the Vulkan graphics API, helping with gaming performance. Samsung Pay makes a return, including support for magstripe-emulation tech.

Availability of both Galaxy S7 models begins in mid-March. Carriers are already expressing their interest in the phone, and we’ve heard Verizon announce pre-orders with a couple bundle deals, T-Mobile with a $0-down plan, and Sprint with a buy-one-get-one-half-off offer.

Update: All four major US carriers will carry the GS7, with sales beginning March 11. Pre-orders open this week, on February 23. AT&T MVNO Cricket also announced that it will carry the device, but will announce details later.

The v0.19.0 update also brings a Spark the Flame-themed game mode, The Ancient Secret mode, and a tonne of gameplay changes.