Sprint announces Galaxy S5 Sport, and it’s not quite another Active

Discover the new Galaxy S5 Sport for Sprint, and learn how it differs from the GS5 Active for AT&T.

The Galaxy S5 Active launched for AT&T late last month, and while we’ve gone hands-on to bring you a review of that model, we’ve been interested in learning about increased availability for the phone; would it go up for sale internationally? What about on other North American carriers? Well, at a Sprint press event this morning, the company announced that it would start carrying the Galaxy S5 Sport, “a smartphone built for the athletic lifestyle.” But is this the GS5 Active, or something else altogether?

The GS5 Sport doesn’t look quite like the GS5 Active, nor does it match the original GS5. Instead, we get a slightly tweaked new design for the phone’s exterior, with a texture engineered to resist droppage during physical activity. The absence of any hardware Active button nor mention of MIL-STD-810G certification (just the usual IP67 stuff) makes it clear that this is very much not a straight-up Sprint version of the Active, but the presence of hardware Android buttons and Samsung’s Activity Zone paint it instead like a “Galaxy S5 Active Lite.”

Otherwise, changes from the normal GS5 seem minimal. Sprint plays up how the GS5 Sport arrives with the MapMyFitness app and users get a free year of MVP service – but even the regular GS5 came with six months free. New GS5 Sport owners will also get $50 off the Gear Fit, or 50% off select sport headphones. Maybe more than anything, Sprint is using this phone to draw attention to its Sprint Fit Live software package, which we’ll be seeing come to future additions to Sprint’s 2014 Android lineup. 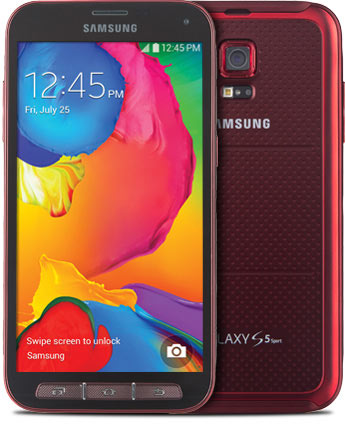