Check out what may be the first Galaxy S5 Mini pic to arrive, and check out a render of the GS5 itself for Verizon in blue.

With the launch of the Galaxy S5 Active, the GS5’s family of closely related smartphones is finally starting to get fleshed-out. The Galaxy K zoom really got us going, since for all intents and purposes it’s a GS5 Zoom, but the Active is at least the first of these spin-offs to maintain the GS5 branding. What about a GS5 Mini to go with it? We’ve been seeing more and more evidence for this model, but today we might get our first actual look at the hardware, as we also take a peek at what’s next for the GS5 itself.

Well, it may not match some of the renders we’ve seen (which were a little iffy to begin with), but what we see here today sure looks like we’d expect a GS5 Mini to. In fact, with a passing glance you might mistake this for the larger GS5, but looking a little more closely confirms that this is something new: for instance, in the space between the Samsung logo and the flash/heart rate sensor on the GS5 proper, there are four rows of dots, while here there are only three. There’s some evidence of waterproofing in the form of a battery door gasket, but the phone oddly seems to be missing protective port flaps.

Remember back at the start of May when we heard that Verizon would be getting the GS5 in gold? Sure enough, a few weeks later we saw Samsung confirm the news – not just for Verizon, but the rest of the big US carriers, as well. Now we wonder if history’s about to repeat itself, with the leak of a render of the GS5 in blue for Verizon. With any luck, Samsung will similarly verify this rumor in the weeks to come. 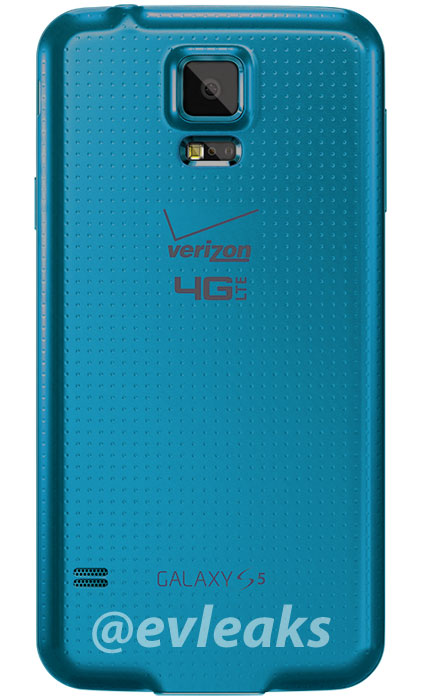