New Galaxy S5 Mini images show the device in a variety of different situations. Let’s take a look at it.

It’s long been rumored that a Samsung Galaxy S5 Mini has been on the way, but we’re only now seeing the first huge leak of the device. SamMobile has published a set of images showing the device off, making its similarities to the regular S5 apparent.

In terms of the looks of the device, pretty much everything about it is similar to the Galaxy S5. It’s difficult to tell the devices apart, with both rocking a perforated plastic back, removable back cover, and heart rate scanner.

The specs are where the two handsets differentiate — an unannounced Samsung Exynos 3 chip at 1.4 GHz is expected to power the device, and 1.5 GB of RAM, 16GB of internal memory (with expandable storage), an 8MP rear-facing camera — with a 2.1MP front-facer — and a 4.5-inch 720p display are reportedly contained within it.

The phone is also rated with IP67 water and dust resistance, despite the fact that the bottom port for microUSB connectivity is not covered.

Android 4.4.2, KitKat, with Samsung’s custom TouchWiz skin, is allegedly the OS the S5 Mini will run. We cannot help but admit that we’re a bit disappointed with it not launching with Android 4.4.3.

We don’t know when this device could possibly be announced, but it’s possible that Thursday’s Samsung event may be the venue of choice.

For even more images of the Galaxy S5 Mini, head over to the source link. 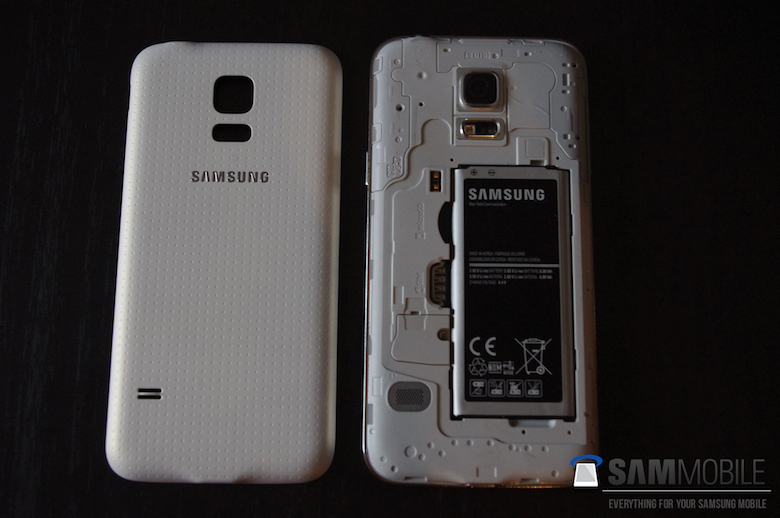