We’ve said it before: durable smartphones shouldn’t have to be crappy ones. After all, these things are supposed to be “life companions.” You want a device that can keep up with you no matter how muddy, wet, or bumpy your slog through life becomes – and you shouldn’t have to sacrifice specs for that level of durability.

Samsung gave us a taste of that best-of-both-worlds experience with last year’s Galaxy S 4 Active, but in doing so it introduced significant compromise to the spec sheet. When the new Galaxy S5 launched earlier this spring as a waterproof flagship for the mainstream, we wondered if Samsung would bother with an “Active” variant at all. Nonetheless, here it is: a bulked-up version of the S5 that matches the flagship nearly spec-for-spec, and throws in “mil-spec” durability to boot.

So, is the new Galaxy S5 Active the smartphone you should buy if your life is more construction site than corporate office … or is this this just another tough talker with a glass jaw? Find out below, in our Galaxy S5 Active review. 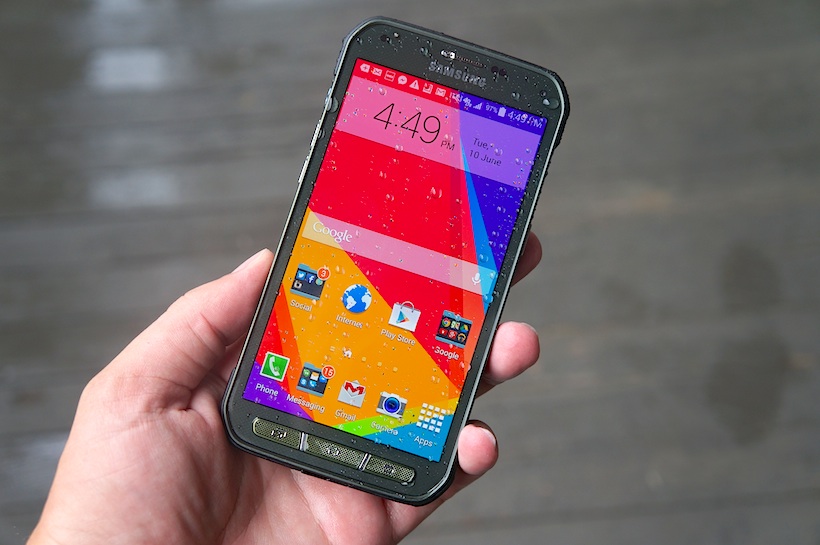 In case you weren’t tipped off by the camouflage paint job on our review unit, the 170g, 8.9mm-thick Galaxy S5 Active wants you to know it can take a pounding. As noted above, it carries the same immersion rating as the standard Galaxy S5 (IP67), but it also boasts a MIL-STD-810G certification so you can call it “military grade” without (much) exaggeration. Those factors combined mean the Galaxy S5 Active is technically rated for the following:

That’s not a bad list, even considering the inconsistent and murky state of the MIL-STD-810 “certification”. But as always, folks, it’s crucial to read the fine print. Samsung and AT&T warn us right on the product page that the device “may not perform as shown in all extreme conditions,” and our real-life testing bears that out. 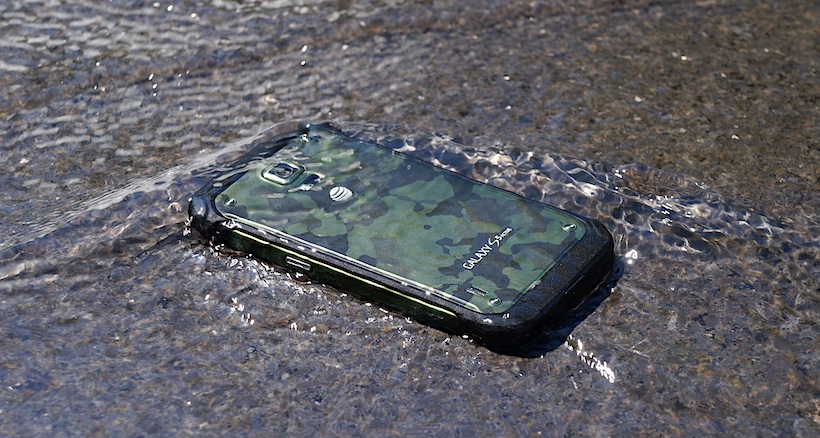 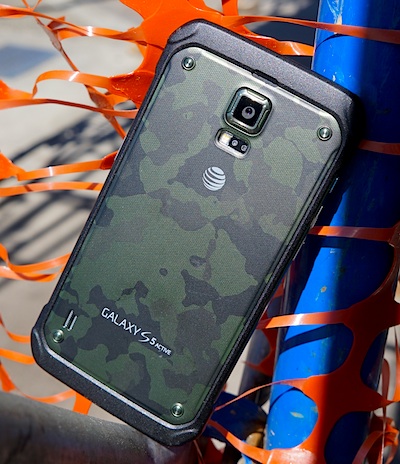 In practice, we’ve found that the Galaxy S5 Active is either impact resistant or water resistant … but not necessarily both at the same time. Properly sealing the battery door –a finicky affair with many snaps to be seated along the perimeter– does indeed render the phone capable of weathering downpours, flash floods, or brief excursions in the swimming pool, just like the Galaxy S5 before it. But subjecting the device to impact while it’s in water –dropping it onto a hard, water-covered surface from three feet, say– pushes the device too far. This exact scenario popped a few seals somewhere inside our test device, which then allowed water to flood and ruin the unit.

You might say such water-covered concrete slabs are a rare find – a valid counterpoint (unless you’ve ever been near a swimming pool). And this certainly isn’t the first device we’ve tested that’s susceptible to the fatal cocktail of impact plus immersion. But our test unit also stumbled on dry land: another less-than-4-foot drop onto a hard, flat surface jarred the SIM card loose, requiring a restart to fix it.

The S5 Active likely wears scuffs and scratches better over time than its non-Active counterpart, and its extra padding probably does afford some added durability in the long term. But given what we’ve seen over the course of our ten-day test period, it’s tough to recommend this phone to those who truly need a device that’s “most everything proof.” 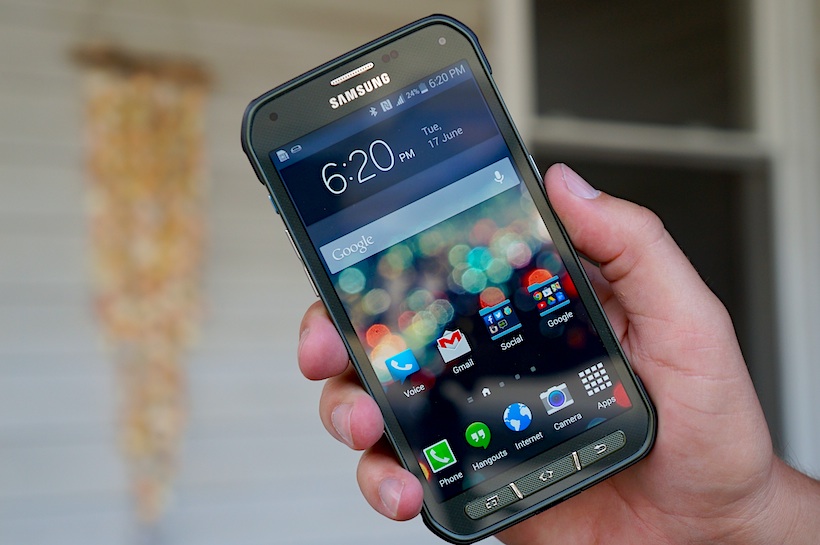 On the cooler side of the pillow, you’re not sacrificing much on the spec sheet in exchange for that pseudo-ruggedness. Samsung took the feedback on last year’s Active model to heart, eliminating the compromises in display and camera: respectively, they’re the same 5.1-inch 1080p AMOLED panel and 16MP sensor you’ll find on the stock Galaxy S5 for the US. The innards inventory, from the Snapdragon 801 to the 2GB of RAM/16GB storage/128GB microSD expandability, is also unchanged. The only “major” differences here are the Active’s lack of a fingerprint reader and the step down from USB 3.0 to 2.0, neither of which is worth crying over.

We’d still be shedding tears over Samsung’s Android software without the improvements the company brought with the latest version of TouchWiz (which we detailed in our full S5 review). Thankfully, Samsung’s newest UI riding atop Android 4.4.2 is just as fluid and responsive here, and while its rejiggered palette and flat design aesthetic won’t please everyone, they sure make the Active’s AMOLED display look good. Best of all for outdoorspeople, the software doesn’t fade into invisibility when the clouds clear out: the display is capable of astonishing brightness in direct sunlight, and it can also be set to a super-dim 2 nits for bedtime reading. 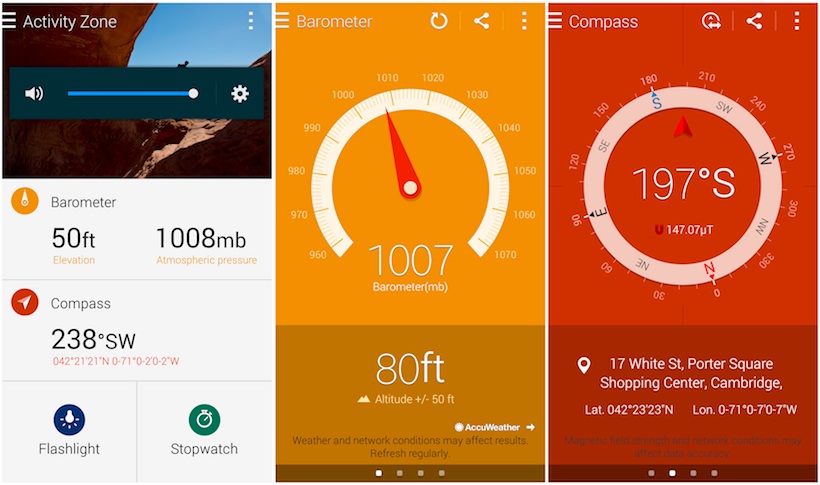 The only significant difference in the interface is Samsung’s Activity Zone, a loose collection of vaguely-outdoorsy features gathered into a single hub. It’s somewhat handy to have a gathering place for all the phone’s “action” apps, but the stock collection (Barometer, Compass, Flashlight, Stopwatch) is pretty sparse. Fortunately, you can plug in third-party apps to augment the out-of-box offerings in order to make the Zone your own, so this could serve as a handy custom launching platform for those keen on doing things their way.

Those folks also have a hardware-based ally, in the blue “Active key” mounted above the Galaxy S5’s volume rocker. It launches the Activity Zone by default, but it can be reassigned to access other apps, including the camera. Sadly though, Samsung hasn’t given that key the ability to wake the device from standby: you still need to unlock the conventional way first (press a button, swipe the screen), and then hit the key … so we’re left wondering why the company even bothered to include it. Its position and functionality suggest an abandoned –or forthcoming– plan to make it compatible with AT&T’s push-to-talk service, but for now it’s just a not-so-convenient convenience key. 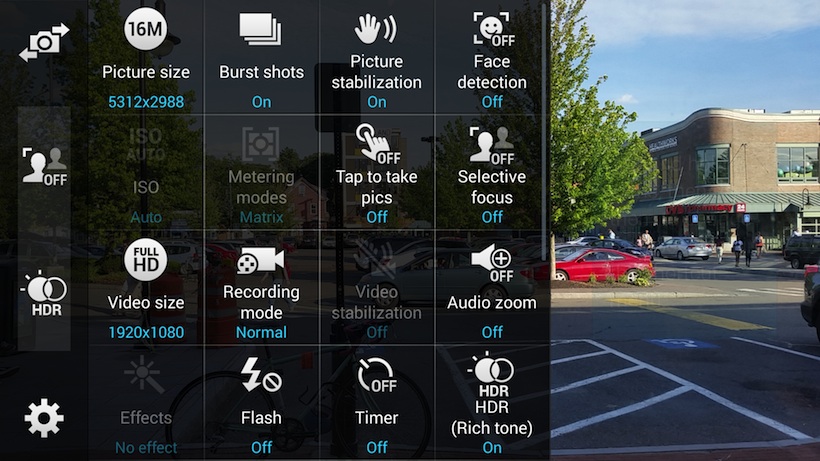 Taking pictures with the Galaxy S5’s 16MP primary camera is a lot like shooting with the S5’s … which means the end results can be really, really good. From the sharp, slightly over-saturated daylight photos to the effective and well-balanced HDR mode, pictures come out looking pretty darn good in bright lighting. We especially like the ability to shoot in full resolution using a widescreen format, something not always seen on high-res flagships.

While the Active key can be used as a shutter release, it’s not well positioned to do so: you’ll probably only use this ability for underwater photos.

Night shooting is another story. As we already covered this in our Galaxy S5 review, we won’t belabor the point – but between the long capture time, unintuitive software stabilization, and noisy output, the S5 Active’s camera is thoroughly outclassed by HTC, Nokia, and Sony offerings when it comes to low-light photography. Whether you’re a bar-hopping night owl or a spotted owl photographer, this isn’t the camera you want with you.

Thankfully, video output is gorgeous (again, given the right lighting). Frame rate is a little low in the default mode, but there are options here to smooth that out, and you can also shoot in slow mo, or crank the resolution all the way up to 4K if you like. The device is sensitive to shakes and shimmies, though, so make sure you’ve got a steady hand when you’re sneaking up on wildlife.

While using the Galaxy S5 Active day-to-day is actually quite a different experience than that of the stock S5, that’s due almost entirely to their physical differences. If you discount the S5 Active’s more hefty physicality, these devices are actually quite similar, from phone calls to gaming to S Health to the rear-firing (but surprisingly loud and large) speaker. The Active performs just as well on WiFi and on AT&T’s LTE network in the Greater Boston area, and we’ve had no issues maintaining the Bluetooth connection to our Gear Fit. 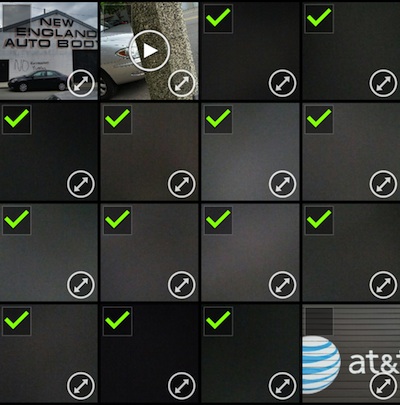 The phone does have one annoying quirk, though: it often wakes up in our pocket for no apparent reason (as evidenced by our ample collection of pocket photos). We’re not sure why this is; initially we suspected the keys below the display, but only the home button is capable of waking the phone, and it’s no easier to press than its equivalent on the Galaxy S5. We’re still investigating this issue, which has shown up on both our review devices. If you’re seeing similar issues on your own Galaxy S5 Active, we’d love to hear about it in the comments.

Prospective owners should keep a close eye on potential power drains like that pocket problem: while the 2800 mAh (10.78Wh) battery is removable, the screen sucks power very quickly in super-bright outdoor mode. Using it extensively outdoors shaves about an hour from the stock Galaxy S5’s endurance figure, giving us just about 4.5 hours of screen-on time on a 7.5-hour charge. Fortunately the battery is exactly the same removable pack as found on the non-Active S5, so finding replacements should be pretty easy. 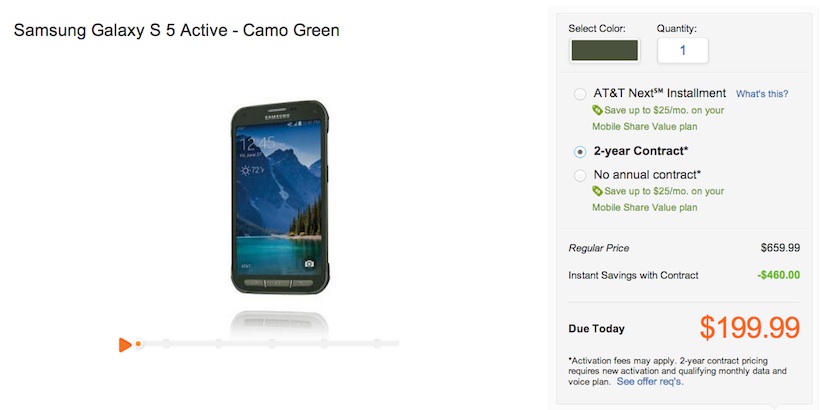 The Galaxy S5 Active is exclusive to AT&T in the United States, where it sells for $199 on a two-year contract. Customers interested in an installment plan can pay either $33 or $27.50 per month on AT&T’s NEXT 12 and NEXT 18 plans, respectively, while those in search of a smartphone sans contract will need to fork over $659.99 to take the Active home. That puts it at almost exactly the same price point as AT&T’s Galaxy S5, further blurring the line between these handsets.

Fortunately, the camouflage paint job is optional: the S5 Active comes in Titanium Gray and Ruby Red for those not seeking to blend in with the trees. 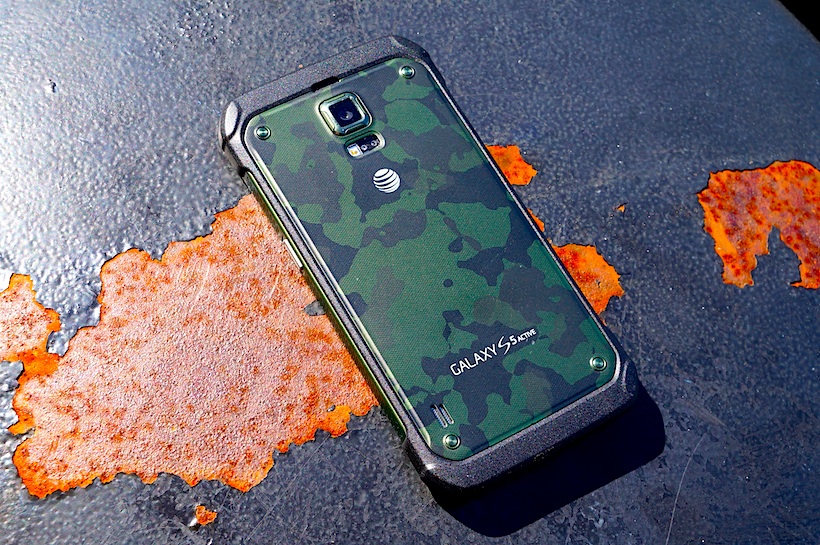 Whatever the paint job, whether a Galaxy S5 Active belongs in your pocket depends on how much meat you really need on your smartphone’s bones. Remember, the stock S5 is already immersion-resistant, and while a MIL-STD-810G rating should mean the Active is much more durable, in our experience that doesn’t seem to be the case (at least in terms of everyday drops and fumbles). When you consider that this is Samsung’s second outdoorsy phone in as many years to struggle with the “Active” part of its job description, it’s tough to recommend it for those who truly need super-tough durability.

That’s not to say there’s no reason to buy it, though. For some, even a slight improvement in ruggedness is reason enough to spring for this device, especially for little to no extra cost. We’d feel better about sweating all over the Active on a long run, for example, or tossing it carelessly around the kayak during a day of paddling, than we would doing the same with the plain-vanilla S5. There’s also something to be said for an industrial design that actually says something other than “glam.”

For those in search of a phone they won’t feel guilty about beating up, there are certainly worse options than the beefy Active. Just don’t test its limits … and don’t believe for a second that it’s even mostly “everything-proof.” 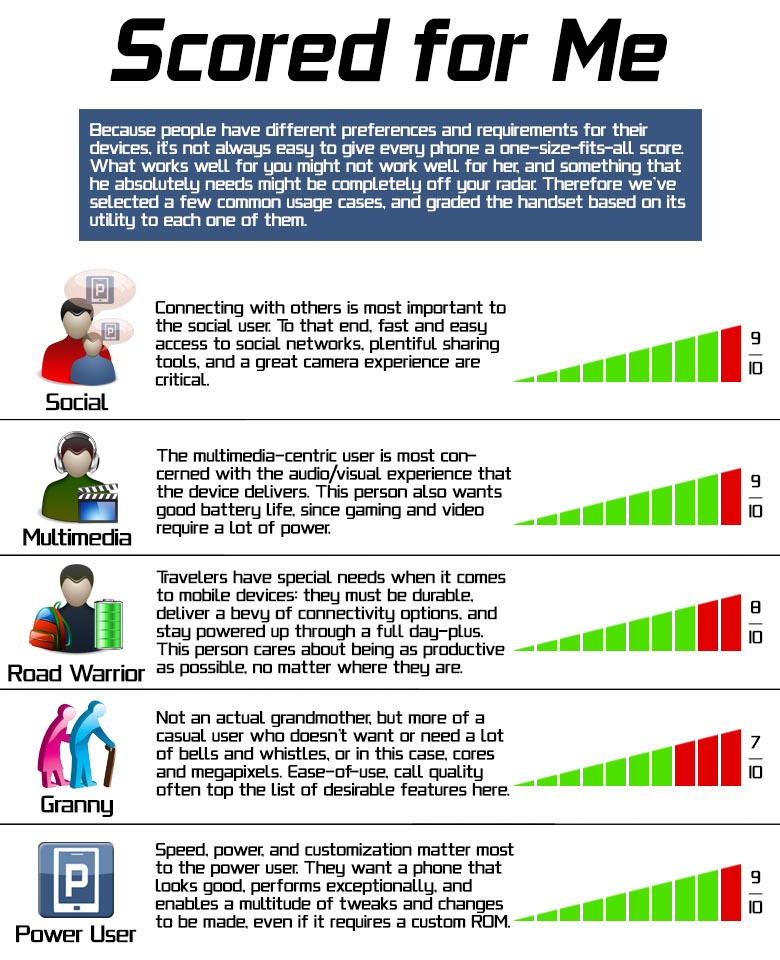