Our first Galaxy S5 Active render has surfaced, and it’s a dead-ringer for what we’ve seen in video hands-ons.

There are no hard-and-fast rules when it comes to how news of pre-release smartphones arrive. Sometimes it’s a months-long process, wherein new information arrives little by little, and the whole time we’re unsure what’s trustworthy and what’s not. Sometimes we’re left guessing all the way up until the very end. And then there those times when the normal progression all goes awry, and we’re seeing leaks all out of order. Such is the case with Samsung’s Galaxy S5 Active, as we check out the first render of the phone to leak, as it gets ready for launch on AT&T.

While rumors of the GS5 Active aren’t exactly new, it’s only recently that they’ve matured from general talk of model numbers and features to hard evidence, in the form of a bunch of hands-on videos. As such, the GS5 is pretty much an open book at this point; we may quibble about details, like the presence or absence of optical image stabilization, but the phone’s not going to arrive looking or feeling vastly different from what we’ve seen.

That makes the arrival of this render a little more difficult to appreciate than it would be, had it surfaced earlier. Does it show us anything new? Not so much. But what it does offer is further support for the idea of the GS5A being an AT&T exclusive – at least in the States. Certainly, we haven’t caught wind of it for any other carrier yet, and AT&T did introduce the GS4A last year. 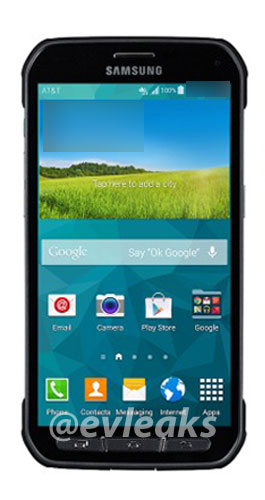