The Galaxy S 4. It’s a name that commands respect: one that strikes fear into the hearts of other smartphones, and incites envy in the eyes of would-be buyers. As our full review reinforces, it’s a name that represents one of the best Android smartphones you can buy today.

But the Galaxy S 4 isn’t just one phone: it’s a device family comprised of many globally-specific variants. The SPH-L720 we reviewed last week was built especially for the American carrier Sprint, and while it’s functionally identical to the other American operator variants, it has significantly less in common with its most-popular global sibling, the GT-I9500.

The predominant distinction between them is the SoC, which on the 9500 is the much-talked-about Exynos 5 Octa, Samsung’s 28nm “eight-core” unit boasting a pair of Cortex quad-core CPUs lashed together. Due to an assumed shortfall in Samsung’s ability to create the LTE-capable Octa SoCs, the manufacturer opted to ship American units with the Snapdragon 600 instead, and indeed, that’s what our Sprint friend here is packing.

If you’re wondering just how much difference an Exynos “octa-core” heartbeat makes when compared to one of Qualcomm’s latest quad-core processors, you’ve come to the right place. Join us in the video below for a comparison of the GT-I9500 and the SPH-L720. We’ll tour the hardware packed inside, the performance of the software on each unit, and we’ll even talk battery life and camera to get you as close as possible to answering the question “which of these should I be thinking of blowing a few Benjamins on?” (Spoiler alert: if you’re an American, it’s probably the cheaper one.)

For those interested in the full octa-vs-quad benchmark report, the scores are included below. Final battery test scores will also be added to this post when they become available. 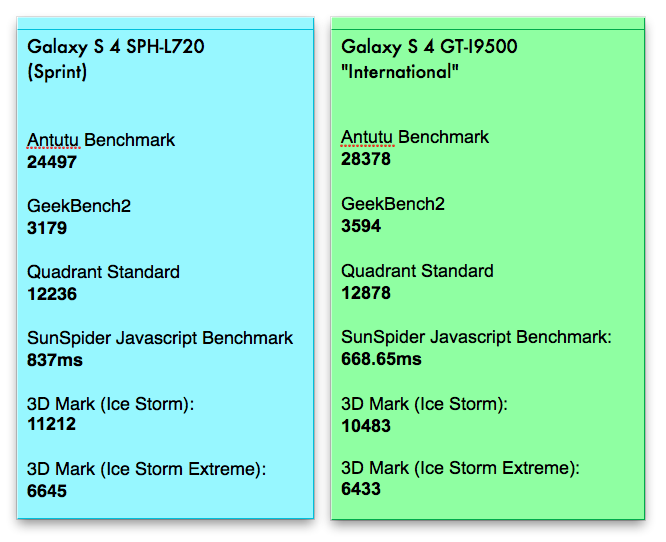 We opted for a streaming video test versus an on-device video test because we consider it a more common use case. The streaming provider used was Netflix. We elected to keep the cellular radio powered down to avoid result corruption due to our review devices being tied to different carriers (one CDMA/LTE, one GSM/LTE). Each device was paired (one at a time) to the same WiFi network in the same room at the same time of day. The same films, in the same order, were used for each device. Each device was synced to the same accounts, and each therefore received the same number of notifications and passed the same amount of background data during the test period. 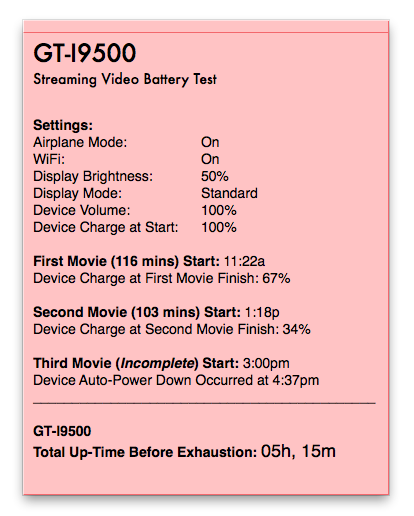 Update 2: The Sprint Galaxy S 4 was able to hold out for 26 minutes longer than the GT-I9500 under the same conditions, allowing us to squeeze in three feature-length films (albeit one of them sans end credits) on a single battery charge, streaming over WiFi. That performance isn’t bad at all. 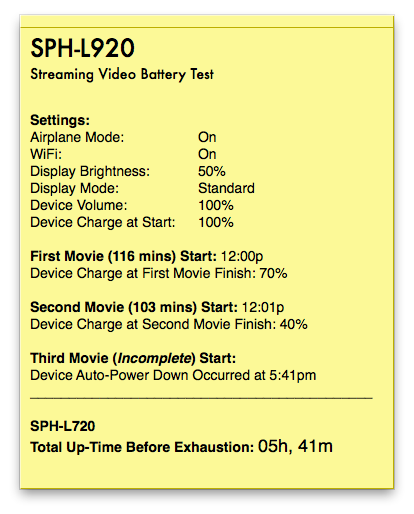 We appreciate that this data may not be terribly useful, as the act of running a video continuously on each device is one continuous single type of load. We didn’t expect the results to differ much, and 26 minutes in the face of over five hours is indeed fairly minor. We point you to the aforementioned “reality” testing for a more accurate assessment of the endurance of these two devices, and thank you for your patience waiting for these results.

We keep getting amazing deals from Amazon and Samsung, where we find the latest Galaxy S21 series, the Galaxy S20 FE, and more on sale