Take a look at the new Galaxy S 4 Active pics to surface, and hear about the phone’s hardware capabilities.
Published 20 May 2013, 11:10 EDT

The idea of a Samsung Galaxy S 4 Active has been floating around for months now, and back in April it finally started to take shape as a waterproof version of the GS4 itself. Since then we’ve heard about a possible launch next month, and seen AT&T mentioned as a potential carrier in the US. What we haven’t had has been a solid understanding of the phone’s hardware, nor any kind of look at the facade itself. Today we get both, and it’s all largely good news.

That means a phone that keeps a lot of GS4 design cues, as well as hardware components. While what we can see here adds some bold splashes of color, it generally keeps the same look and layout of the GS4. There are some notable changes, like the arrival of extra physical Android buttons, but overall this isn’t some bulky rubber-drowned mess that hides its GS4 roots.

On the specs side, it’s looking like the GS4 Active could run the same Snapdragon 600 as the US GS4, while keeping things like the 1080p display. In fact, the only downgrade of which we’re currently aware is a switch to an eight-megapixel main camera. There could be more that hasn’t yet come to light, but if that’s the extent of the changes, this GS4 Active could be an arguably more compelling phone than the GS4 proper. 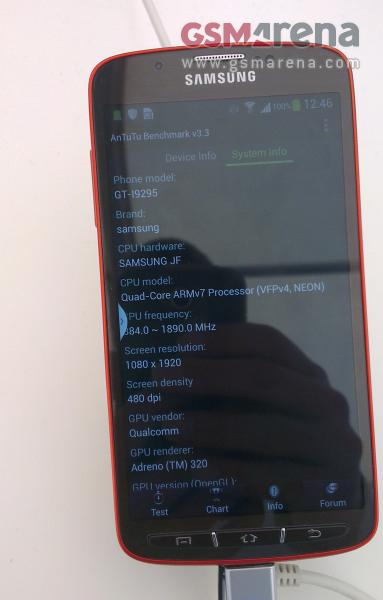 Qualcomm has gone ahead and confirmed the SoC details for the device.