For the first time in the history of Samsung and the Galaxy Note brand, we’re getting two different sizes of the smartphone that basically introduced the “phablet” concept
Published 07 August 2019, 16:00 EDT

Every element of Galaxy Note10 was designed to help users achieve more. Whether they’re finishing a big project for work, capturing and editing a video, or playing their favorite mobile game, the Galaxy Note10 will help them do it faster and better — DJ Koh, President and CEO of IT & Mobile Communications Division, Samsung Electronic

For the first time in the history of Samsung and the Galaxy Note brand, we’re getting two different sizes of the smartphone that basically introduced the “phablet” concept by being larger than anything else out there. However, with screen sizes becoming larger and larger, Samsung decided that it needs a large phone, and another, larger one. 6.3- and 6.8-inches are the two display sizes, but in the case of the Note10, the resolution drops to FHD+, while the Note10+ maintains QHD+ (you can find all the specs, including resolution numbers, at the top of the post).

Those displays feature a single, centered punch-hole. Samsung calls it the Infinity O display, and the camera inside said hole is a 10MP shooter. The back camera system is a 16MP+12MP+12MP trio on the Note10, with the Note10+ adding an extra VGA depth camera. 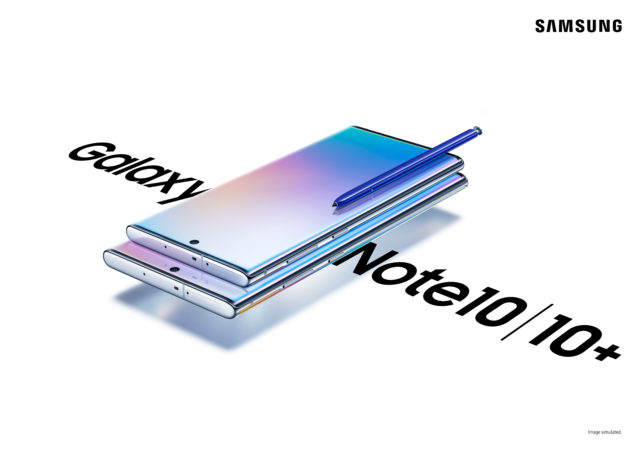 While the Note10+ features super fast wired charging at 45W, with a charger you will need to purchase separately, the Note10 didn’t inherit this feature. But they both come with an S-Pen, as usual for Note devices, which seems to be, functionality and feature-wise, the same as the one bundled with the Note9.

Aura Glow, Aura White and Aura Black are the three color options. An Aura Blue version will be exclusive to Best Buy and Samsung’s online store. While you can pre-order your device starting tomorrow at most carriers, the Note10 phones will hit the stores on August 23, 2019.

Now if you open a group chat in Hangouts and tap on the video call icon, it automatically creates a Google Meet group video call link.

iPhone 12’s display comes with Ceramic Shield protection, but why take a chance? Choose from our list of best iPhone 12 screen protectors.