With this week’s launch of the HTC 10, we wrapped up the usual group of early-year smartphone flagship announcements. That means we’ve probably got a couple months of comparative down-time before we start seeing some serious summer-launch action, all ramping up in anticipation of IFA. One of the more significant handsets we expect to be part of that summer lineup is Samsung’s next stylus-equipped Note handset, especially after the Note 5 moved up Samsung’s launch timing to mid-August. Now a new leak gives us an early glimpse at how the manufacturer’s plans for the Galaxy Note 6 might be taking shape, and could hint at Samsung correcting one big Note 5 oversight.

Arguably the most controversial component to the Note 5’s launch was Samsung’s decision not to sell the phablet in Europe. The company argued that shoppers simply weren’t interested in a stylus-equipped model, and that the Galaxy S6 edge+ would suffice for their large-screen handset needs. It should suffice to say that Note fans in Europe were not pleased by this news.

What we’re looking at is a leaked set of model numbers supposedly for Galaxy Note 6 variants in development. The “Grace” bit refers to the phone’s codename, while model number SM-N930 is a logical progression from the Note 5’s N920.

But what’s really catching eyes is the presence of a Note 6 version for Europe, spotted all the way down at the bottom of this list. If Samsung’s really developing such a model, it could suggest that – much like the Galaxy S7’s design corrected a number of missteps with the Galaxy S6 – the Galaxy Note 6’s launch could be engineered to set right what was done wrong with the Note 5.

Mind you, this isn’t solid proof that Samsung’s changed its mind about Note sales in Europe, but it’s just enough to have us really hopeful. 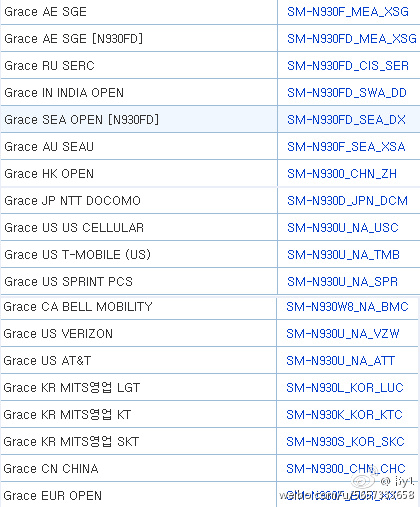