The Samsung Galaxy Note is the original phone-tablet hybrid. Each year we get an updated one, and each year we compare the new model with its immediate predecessor to see what’s changed. This year, those changes run to the very core of what it means to be a Note. Join us for our latest comparison, as we dissect the differences between the Galaxy Note 5 and its Note 4 forerunner! 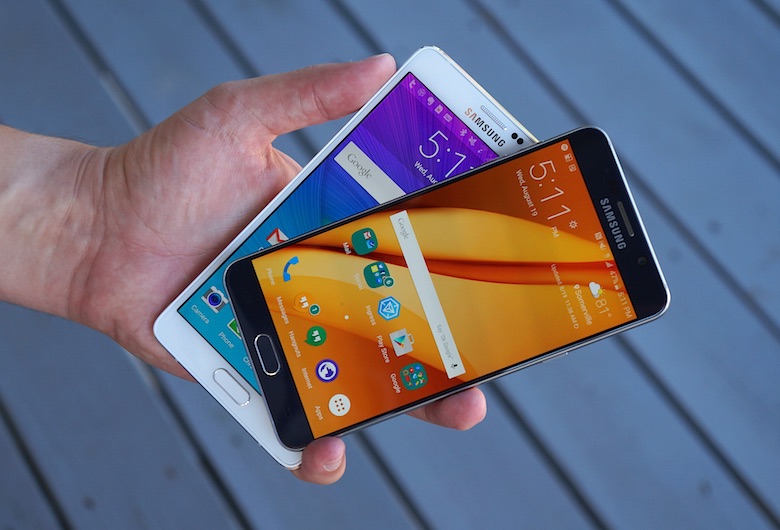 The changes here are most pronounced in hardware, and many of them are upgrades. The imitation leather back cover has given way to curved glass, last year’s sharp-edged chamfers melting into this year’s 7000-series aluminum rails, and that combination makes the Note 5 a more comfortable device to hold in the hand. The finicky swipe-based fingerprint sensor of yesteryear is gone, replaced by the more reliable press-and-hold type, and though the screen size has stayed the same at 5.7 inches, the new device is smaller in every dimension, with slimmer bezels to boot. The speakerphone sounds like it could be the same physical driver, but it’s been moved from the back cover to the bottom edge, alongside the new S Pen. On the Note 4, deploying the S Pen was a simple matter of pulling it from its silo with a fingernail, but Samsung has fancied it up on the Note 5 with a click-and-release action that’s so cool it makes everything else feel primitive. Also, the S Pen itself has gotten a paint job to make its plastic build look a little less … plasticky.

But not all these changes come without a cost. While the aesthetic modifications do a good job of bringing the Note in line with its smaller sibling the Galaxy S6, the tradeoff is a phone that blends in more than it stands out. Also the new S Pen’s deployment mechanism is a little more cumbersome to use than the old quick-draw method. And let’s stop burying the lede: the biggest and most controversial change to the Note 5 is the watering-down of its hardware customizability. The MicroSD card slot and removable battery that have been staples of the Note line since its inception are gone, and to add insult to injury, battery size has also been reduced by 7% in the new phone (from 3220 mAh to 3000). For those who’ve always bought the Galaxy Note because it’s the most powerful, most versatile device in Samsung’s lineup, it’s doubtful that the new “fast” wireless charging or 100 gigs of free OneDrive Storage will make up for these perceived downgrades. 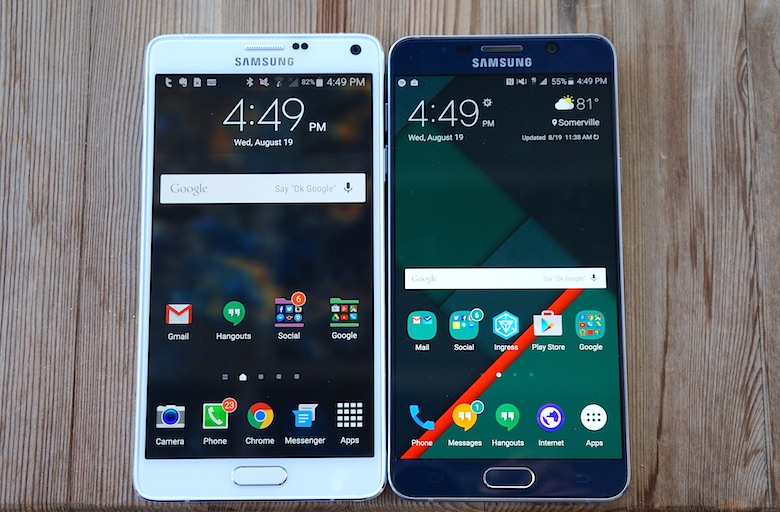 Things are more encouraging in software, where Samsung has ported many of the positives from the Galaxy S6. First of all, while the displays feature identical Quad HD resolution, the out-of-box dpi setting is higher on the Note 5, allowing for more information to be squeezed onto the screen. There’s more use of transparencies, less use of pop-up dialogs, and subtle signs of modernization in places like app folders. If you still don’t like Samsung’s design language, you can theme the Note 5 for a totally reskinned Android experience, something still not possible without a third-party launcher on our Verizon Wireless-branded Note 4. The Note 5 is also somewhat snappier than the Note 4, but at this point it’s an open question whether that’s thanks more to the uprated processor and added gig of RAM than the fact that we’re comparing a freshly unboxed unit with an older one. You’ll want to stay tuned for the After The Buzz coverage to find out.

The most significant software changes are the ones we saw demoed last week in New York: removing the S Pen when the phone is in standby mode now fires up a note-taking screen, which allows you to take an immediate memo that will then be automatically saved when you put the pen back. You can also use the S Pen to sign PDFs with no additional software now, which is huge if you still deal with companies or people who insist on faxing things. Theres a little more utility here with room for custom apps in the Air View floating launcher, and a multi-screen capture mode that lets you save long lists to a single image file. There’s support for Samsung’s new Ultra High-Quality Audio if you’re a real music junkie. And of course there’s Samsung Pay support in the new phone too, which will become more relevant to American buyers come September. 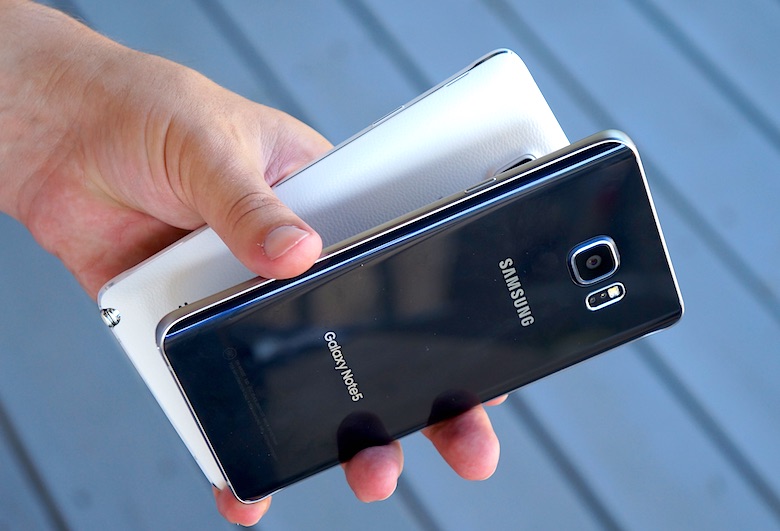 Walking around town with the Galaxy Note 4 alongside the Note 5, it’s easy to see why Samsung opted to modernize the design. The slimmer, slightly lighter build (171g vs 176g) does make a difference in the hand and in the pocket; the edges of the new phone don’t dig into the palm as much; and the new glass back looks nicer than the pleather (though of course it’s also more fragile and it attracts many more fingerprints). I was happy to see Samsung make the leap to a NanoSIM from the older MicroSIM standard – and to see it incorporate the newer-generation, smaller-aperture cameras that were such a hit on the Galaxy S6. In practice, you probably won’t be able to tell much of a difference between photos as the Note 4’s camera is already so excellent. After very limited testing, the principal up-side to the Note 5’s primary shooter seems to be a wider field of view, and on the selfie side it brings a higher-resolution shot (albeit in a 4:3 aspect ratio). The Note 5 also has a much more usable and responsive viewfinder with RAW support, which you can launch just by double-clicking the home button. 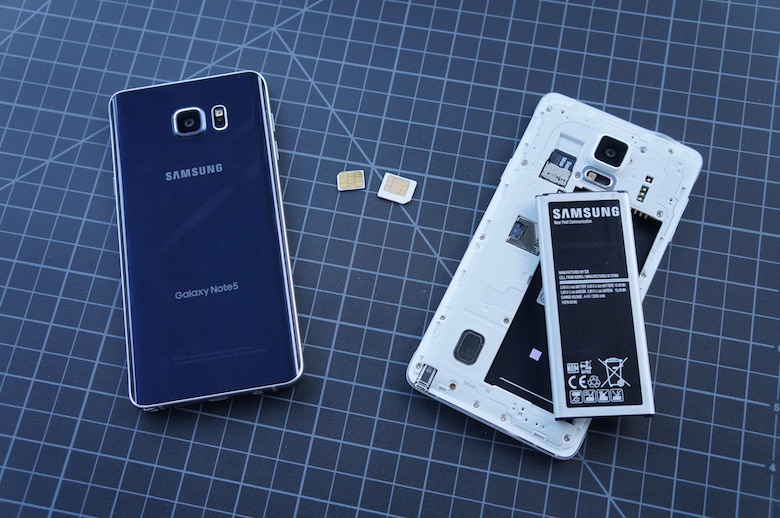 If you’re reading this feature or watching the video above, odds are you’re a Note fan – someone who’s been buying or at least following this product family for some of its four years of existence. And in a very real sense, the Note 5 changes what that family stands for. It’s no longer the take-no-prisoners powerhouse; at the risk of oversimplifying, it’s a slightly scaled-up S6 with a stylus.

Now, Samsung knows what it’s doing with this form factor (it invented it) and that means the Note 5 will probably turn out to be a great phablet. But it also means you’re gonna need to look to yesterday if you’re shopping for what used to define the Note: the swappable battery, expandable memory, and distinct look and feel. While you won’t be getting as wide a range of color options or the latest and greatest features, you can at least get close with custom software and aftermarket hardware skins … and you’d be saving a lot of latinum to boot.

Be sure to check back for our full review of the Galaxy Note 5 coming soon! In the meantime, get up to speed with the latest from Samsung with our hands-on and early-impressions coverage of the Galaxy Note 5, Galaxy S6 edge+, and this crazy keyboard thing.

VIVO is only bringing the vanilla X50 and the X50 Pro to the Indian market, and not the flagship X50 Pro+ that is powered by the Snapdragon 865 chip.
YouTube 1.8M
Facebook 570K
Twitter 197K
Instagram 133K
RSS