The S-Pen of the upcoming Galaxy Note 5 might not be self-ejecting after all, at least that’s what these newly leaked Galaxy Note 5 real life images suggest

While the image at the top doesn’t seem to reveal anything new — we’re looking at a very Galaxy S6-esque design, execution, and overall aspect — it does seem to confirm previous rumors, reports, and leaks concerning the aspect of the upcoming phablet. We can’t help but notice the relatively thin bezels, despite the fact that the phone pictured is wearing a white case (either for protection or concealment).

The image below, however, shows a headphone jack, micro USB port, speaker grill, and microphone hole, very similar to the one found on the Galaxy S6 and Galaxy S6 Edge. However, it’s the bottom right corner that’s more interesting, namely the part where the S-Pen is located.

We’ve already seen the S-Pen pictured in a previous report, and we’ve heard a lot of rumors about how this stylus would operate. Some reports claimed that Samsung might have opted for a self-ejecting mechanism, while others completely dismissed it. Looking at the far right corner of the S-Pen (very bottom, if you’re looking at it as pictured), you can see a portion carved out, just enough for your right hand’s index finger nail to help remove it from the phone.

This new picture might confirm that the S-Pen will be manually operated, just like on every Galaxy Note we’ve previously seen.

August 12/13 is when Samsung is expected to unveil the Galaxy Note 5, among others (Galaxy S6 Edge Plus, Gear A round smartwatch, maybe even the Galaxy S6 mini). So far, the leaks and reports claim the phablet will pack a 5.7-inch-ish Quad HD display, Samsung Exynos 7420/7422 SoC, 3- or 4GB of RAM, multiple storage options, 16MP OIS camera, and a five-megapixel front shooter. 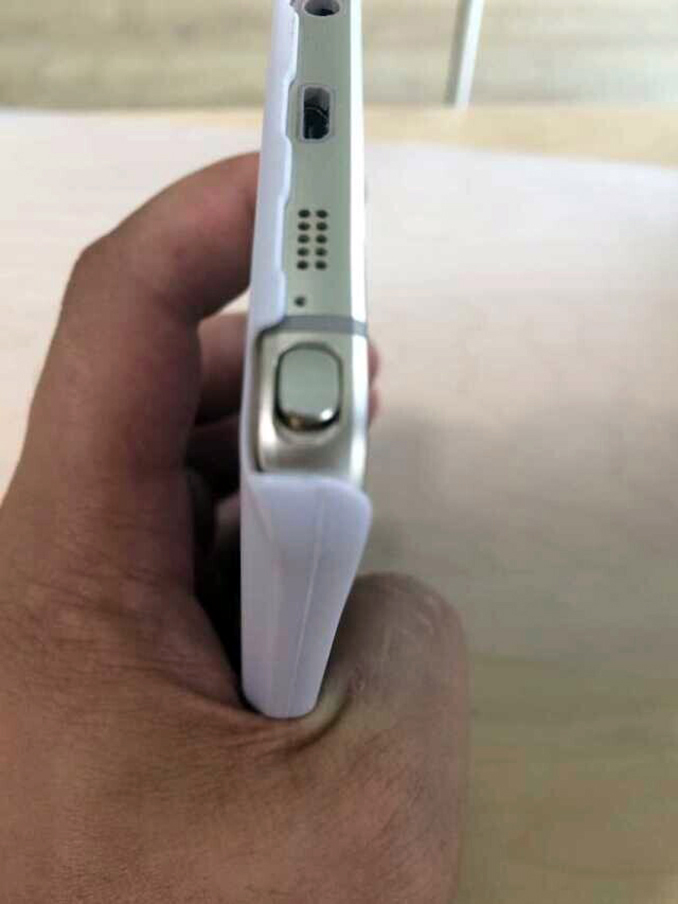