Galaxy Note 3 caught cheating on benchmarks; did Samsung learn nothing from the GS4?

Mobile phone benchmarks sure seem like they’re on the way out. While they often mean well, it’s becoming more and more clear just how difficult it is to accurately gauge overall handset performance with a simple battery of tests. That’s not to say that they don’t have their uses, but we’ve noticed a trend lately where benchmark results are downplayed when evaluating phones. Facing an already uncertain future, benchmarks aren’t done any favors when companies set out to artificially manipulate them, as accusations pegged Samsung as doing with the Galaxy S 4. Now that the Note 3 has arrived, it’s getting put under the microscope, as well, and it looks like Samsung is once again up to its old tricks.

Sure enough, the Note 3 (US edition) is playing around with its CPU behavior when it detects specific benchmark apps being run. Normally, when the phone goes idle three of the four Snapdragon 800 cores are disabled, and the active one sees its speed dialed-down. When a benchmark app is active, however, that never happens, and all cores remain enabled, clocked to full speed. Ars Technica was able to confirm this behavior by simply renaming the package for a benchmark app, and witnessing the drastically different CPU behavior.

When running a GS4 benchmark with such a modified app (top, right), preventing Samsung from cheating, the phone scores very much in line with the LG G2 – without taking that step, the GS4 appears to be much more powerful than the G2, despite being powered by the same Snapdragon 800.

Once again, a hard-coded list of apps was discovered hidden away in the Note 3’s settings, to take advantage of this anomalous CPU behavior. All told, 25 apps trigger this mode, including AnTuTu, GLBenchmark, and NenaMark. 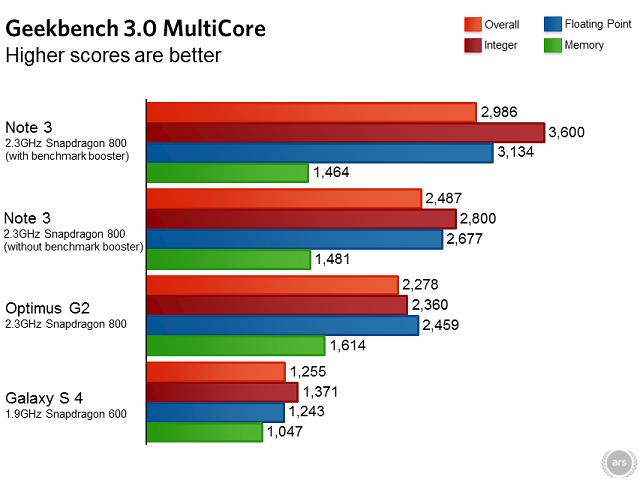 Disney Plus has reached over 50 million subscribers since it first launched in November 2019, with availability in the US, India and some European countries