Experience the unveiling of Samsung’s long-awaited stylus-enhanced tablet through the eyes of the people who were there for the announcement.
Published 16 August 2012, 07:59 EDT

Well, it’s good to know that our guessing instinct here at Pocketnow is still pretty sharp.

On Tuesday, we posted a piece speculating on what Samsung might announce at today’s event in New York City. We offered up three possibilities, all of which happened to feature “Galaxy Note” branding, and said our leading contender was the Galaxy Note 10.1. Not that it was the most difficult puzzle we’ve ever solved, but we nailed it: Wednesday morning’s announcement saw Samsung’s newest tablet announced for American consumption (and creation), with general availability kicking off tomorrow, August 16th.

We’ve been waiting on the new Note for a long time, but not always with baited breath. Announced way back at the Mobile World Congress in Barcelona last February, the device offered little to stir our techno-longings. Back then, it was essentially a Galaxy Tab 10.1 with a stylus, forward-firing speakers, and some new (and more confusing) branding. Since then, Samsung has retooled the unit, swapping out the older dual-core CPU for an Exynos Quad running at 1.4GHz. The company has also bumped the RAM count to 2GB and provided a docking bay for the S Pen stylus, making it slightly more worthy of the more premium brand image the term “Note” conveys.

After the official announcement, Samsung was kind enough to give us some hands-on time with the new Galaxy Note 10.1, and we developed a few impressions. 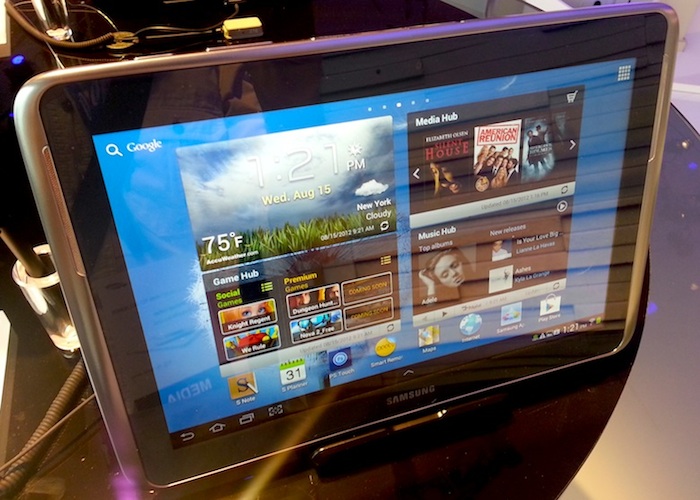 In keeping with its penchant for whimsical, nebulous branding, Samsung has decided that the phrase which best encapsulates its latest tablet is “the new way to Note,” or simply “the new way” for short. The company’s focus at the launch event was redefining how tablets are generally perceived.

“Until now, tablets have been mostly about content consumption,” said Tim Baxter, President of Samsung Electronics America, in his opening remarks. “We think that maybe something’s been missing … What if there was a tablet that actually enhanced your productivity and truly let you do two things at once? That device is here.”

Not content to let us take his word for it, Baxter then introduced filmmaker Baz Luhrmann, who praised the Galaxy Note 10.1 as “a creative tool” that’s a “dream” for collaborative teams. “I’m genuinely thrilled,” he said, “[and] excited … because … I think the big observation for me is that most of these [tablet] devices – they’re passive, you know, you kind of sit there and receive other pieces creativity. 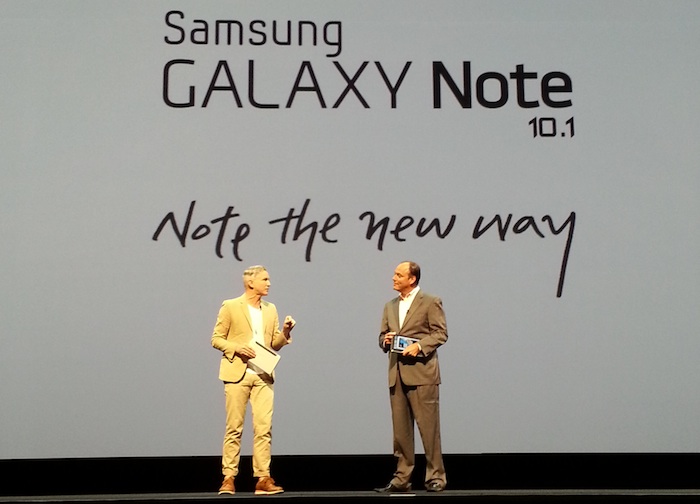 What makes the Note 10.1 such a well-suited device for creation, versus some of its more consumption-centric contemporaries? Samsung was nice enough to run down a few of the particulars for us: 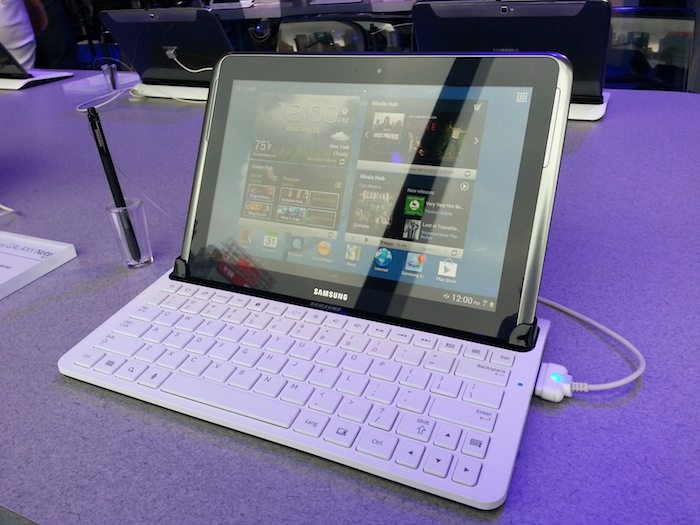 In the hand, the Galaxy Note 10.1 feels impossibly light for its full-figured frame. Even holding it with one hand in landscape orientation isn’t a strain on the wrist, as it can be with the new iPad. Fit and finish is acceptable; the increased size helps keep it from feeling too cheap, but the almost exclusive use of plastic certainly doesn’t give it a luxury feel.

The display, though offering plenty of room to spread out, disappoints at 149ppi, falling far short of comparable tablets. It’s not a horrible panel by any means, but during the product demonstration, the pixelation was quite obvious whenever the camera lingered on a close-up shot of the new Note’s screen. Determining whether that disappointment translates into a real black mark against the device will have to wait for our full review.

There are other special features here. Samsung gave a lot of demo time to Adobe at the announcement, touting the features of PhotoShop Touch, which ships preinstalled on the Note 10.1 along with some optimizations for the S Pen. There’s also the Kno app, offering access to over 200,000 textbooks “so kids can leave the backpack at home,” as well as a TV remote with IR blaster, among other more conventional offerings.

Are these features enough to justify the Note 10.1’s pricing? At $499 for a 16GB WiFi-only model and $549 for a 32GB version, it’s not an easy question- especially in a post-Nexus 7 world. We’ll have to spend some more time with the device to answer that one, but in the interim we can safely say that the Galaxy Note 10.1 definitely brought more features to the table than we were expecting. It’s not going to blow anyone’s socks off, but with its specific, well-honed feature set combined with the successful “Note” brand, the device stands a chance of doing well. At the very least, it’s no longer just a Galaxy Tab with a stylus tied on.

It is also confirmed to feature a 144Hz refresh rate display.