There were rumors of a Galaxy M30 which never made the official announcement with the M10 and M20, and today’s report talks about possible specs.

Samsung introduced the Galaxy M-series of smartphones at the end of January. We knew what to expect, though Samsung only partially delivered, by introducing two models: the Galaxy M10, and the Galaxy M20 (pictured above). Rumors were talking about at least three models in the range, with the Galaxy M30 missing from the official announcement. Those rumors weren’t completely off, as new evidence shows that the Galaxy M30 might still be coming.

An early-January report on the Galaxy M30 was talking about a possible Infinity U display, opposed to the Infinity V on the M10 and M20. It also mentioned said display might be 6.38-inches and feature a resolution of 1080×2220. The Exynos 7885 processor with 4GB of RAM was also mentioned, in addition to a triple-camera setup of 13MP/5MP/5MP sensors, and a 5,000mAh.

Now, today’s report keeps the display size but subtracts 10 pixels from the resolution to 2210×1080. The processor though, and RAM, change from the previous rumor to an Exynos 7904 processor and 6GB of RAM, with 128GB of storage. The cameras are identical as previously rumored, and so does the battery.

What it adds as new information is a 16MP front-facer, residing in the V or U cutout of the Infinity display, dimensions of 159 x 75.1 x 8.4mm, weight of 175 grams, and color options which could include gradient blue and gradient black.

At this moment it is unknown when Samsung will unveil the Galaxy M30, but the rumors are starting to escalate. 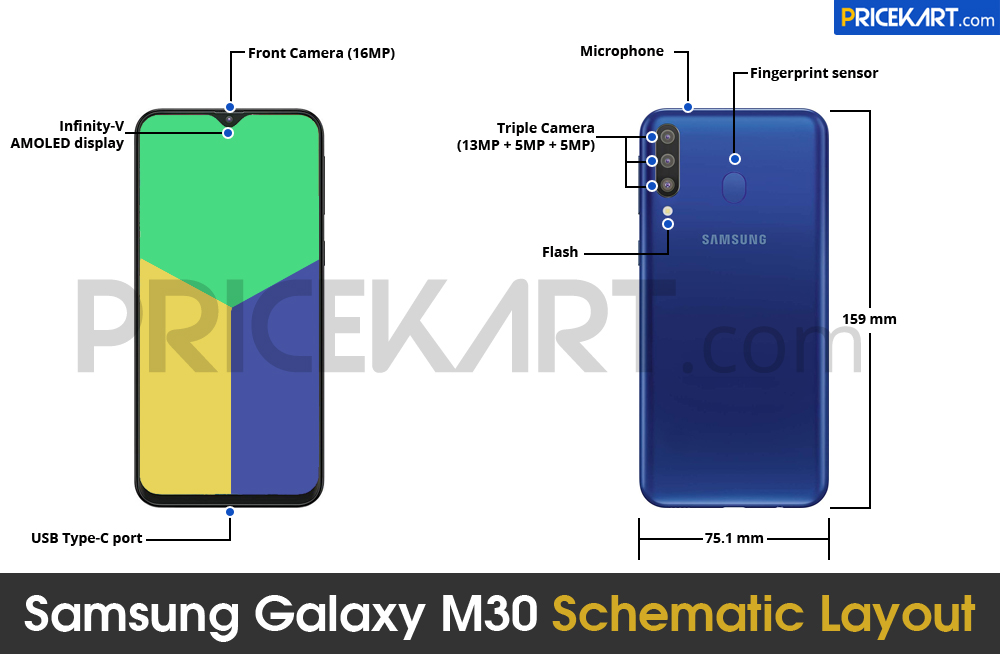