See what the latest benchmark leak can tell us about Samsung Galaxy A9 Pro hardware.

So much of the recent Samsung smartphone news has focused on the flagship Galaxy S7 and Galaxy S7 edge that it’s easy for the little guys to fall through the cracks – even when that “little” guy is a phablet larger than either flagship. But going back a little over a month now, we’ve had a few opportunities to hear about a new A-series handset in Samsung’s pipeline as we checked out rumors and evidence pointing to work on a six-inch Galaxy A9 Pro. How would the phone differ from the regular Galaxy A9, itself introduced just weeks ago? Would it be another Android model, or could the rumors about Windows 10 Mobile be right? We still don’t have all the answers, but a new benchmark report helps fill in a few gaps – while attempting to corroborate certain earlier reports.

Right away, we see some clear improvements over the new Galaxy A9 hardware. Instead of a 13MP main camera and 3GB of RAM, for instance, this new Pro version of the A9 should get a 16MP main shooter and 4GB of RAM. Other details should remain consistent, like the full HD six-inch display, 8MP front-facer, and Snapdragon 652 SoC.

Those similarities extend to Samsung’s choice of operating system, and just like other benchmark reports have looked to confirm, the Galaxy A9 Pro appears to be sticking with Android – though the newer Marshmallow, in this case. That’s not to say that there couldn’t also be a Windows 10 variant out there somewhere, but that theory’s just not supported by this new evidence.

Maybe more than anything, we’re curious about what Samsung’s up to with this idea of giving a phone a little more RAM, and a slightly higher-res camera, and releasing it as a new model unto itself. It would be one thing if this were just another version of the A9, or at least launched at the same time as its namesake, but to arrive a couple months later – as the Galaxy A9 Pro appears that it might – that’s a slightly harder sell. 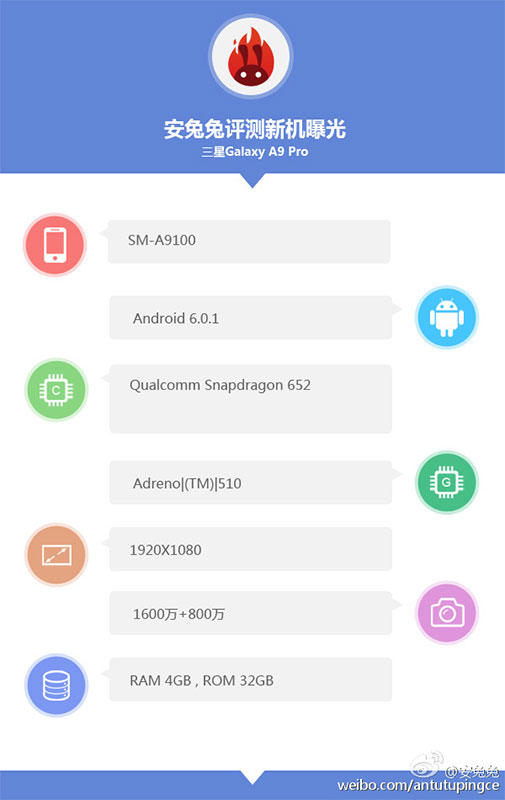