Since specifications have plateaued and everything can do everything, here is a list of five future innovations that OEMs should consider going forward
Published 17 July 2013, 07:00 EDT

I have good news and bad news. The bad news is, we’ve plateaued. Phone specifications have pretty much gotten as good a they’re going to get. Screen resolution has reached 1080p. Memory has grown to 2, and rumor has it soon to be 3 GB. Internal storage space has soared to 64 and 128GB. Processors have gone octa-core. Speakers have gone Boom(sound). And now cameras have gone to 41 megapixels. Everyone is as fast and as big and as bright and as loud as everyone else. Sure there’s some wiggle room. The 1080p screens don’t have boomsound, and the Boomsounders don’t have octacore. Not everyone has everything, of course. There is no “superphone” with all the bells and whistles. This is to be expected. But the truth is, it has all been done by someone. Everyone has gone to eleven.

So I asked the team here at Pocketnow, “What’s left?” and we put our heads together much harder than we should have. After the headache wore off we had 5 solid ideas for ways that our mobile futures might be shaped in the coming generations of smartphones. 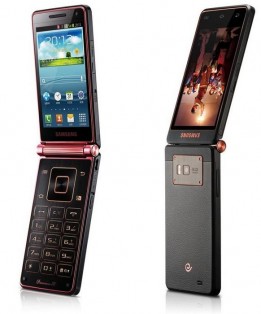 The first and most mentioned feature of future smartphones is form factor. My colleague Michael Fisher’s fatigue of slab phones is well documented. Others on the team expressed similar misgivings in the slab phone arena. Interestingly enough, just yesterday rumors of a Samsung flip phone surfaced. And why not, Samsung? Lord knows you’ve done everything else.

But seriously, a flip phone would not be a crazy idea, nor a horizontal flip phone. A physical keyboard is a great way to type, and most smartphone fanatics out there wouldn’t mind a keyboard if it didn’t sacrifice screen real estate – a problem for most physical keyboarded phones today. Sliders, flippers, moving parts galore do not a cheap phone make. There have been many examples in the past of how this can be done, assuming the OEM doesn’t cheap out on the moving part in question.

But two more highly intriguing form factors that may not be too far in the future comes from patents in Microsoft’s goodie bag. The first is a horizontal slider with screen and keyboard, but the keyboard itself is a module that can be swapped with other modules. Imagine if you will a game pad module, a second screen module, an extra battery module, etc. Each of these components could be swapped in and out like a 1 year old’s toy depending on a user’s needs. Further according to some patent illustrations, components could be stand alone wireless components as well. Theoretically, one could use the game pad to play a game being broadcast onto a large display from across the room.

The second form factor is even more intriguing and comes with video! This is a dual module phone design. Basically it’s two screens that work with each other wirelessly. They can interact with each other and perform complimentary actions for each other – like for example, one screen display a video image in a conference call while the other acts as microphone/speaker solving the biggest problem I have with video conferencing. Check out the video and you’ll get the idea.

Just for fun, here’s a little video of some other form factors (both awesome and insane) perhaps coming soon to a theater near you.

Battery life is an almost constant gripe among smartphone owners. Well one major innovation that is in the beginning stages of development is instantly-charging batteries. This was brought up on the weekly a few months back, but it’s so cool, it bears repeating. The University of Illinois (Represent!) in Chanpaign-Urbana have begun work on batteries that are not only long lasting, but can be charged in seconds. Yes, you read that right – seconds. One Mississippi, Two Mississippi, Three Mississippi, Charged!

Now, I don’t mind those days that I forget to plug my phone in at night, or when my sleeping flailing self knocks my phone off the wireless charge dock. I generally will plug in as I can throughout the day which will get me by. Sure, I’d prefer a phone for 3 days without needing a plug, but when I think about the concept of charging my phone in seconds, suddenly a half-day battery life doesn’t seem like that big a deal. I could conceivably get in my car, plug in my phone, put on my seat belt and then unplug my fully charged phone.

Just think about that for a while.

Yesterday, I wrote about the great yellow unicorn, the Nokia Android phone. I wrote about how if it was going to happen, it’d happen now, but it won’t happen. But what if we changed the game a bit? As a matter of fact, Samsung may have already done that.

Weeks ago, Samsung unveiled their new Windows 8/Android tablet, the Ativ Q. This tablet would run both Windows 8 and Android Apps side by side in a walking in a winter wonderland kind of way. So, it occurred to us – why not phones? Particularly, why not Windows Phones? It’s no secret that Windows Phone is missing some apps, and any kind of decent integration of Google services. Dual-booting a Windows phone night help alleviate those issues.

It should be mentioned that we’re singling out Android and Windows Phone because iOS is about as likely to do anything like this and I am to beat Megan Fox in a beauty contest. But, an OEM with the ability and know-how to bring a dual-booting phone to the masses would be a serious contender with Nokia in the Windows Phone space. Also consider the possibility of a newcomer, such as Firefox OS bundling itself along with Android. The would be a mountain of issues to overcome, but it’s pretty sexy to think about.

Displays have come a long way. I mentioned 1080p and all that jazz above, but rather than what’s in the screen, we’re going to focus on what the screen is made of. Bendable and even foldable/rollable screens could change the face of smartphones as we know it. Imagine taking an HP Veer out of your pocket and opening it up to the size of an S4. Or taking a tube out of your pocket and unrolling the screen to show your contacts to make a quick call. Suddenly your sunglasses could be your phone’s display, in a Google glass on crack kind of way. Phones with screens that have no bezel could make phones sporting dual “Book-like” screens much less (what’s the word I’m looking for?)  clunky. Such phones would also make the dual module phone form factor I mentioned above possible.

The technology is there. Samsung showed off a type of bendable screen as recently as this year’s CES. THe screens are mode of OLEDs, or organic light emitting diodes spread overs a plastic screen instead of glass. The glastic allows the screen to bend, but not yet fold. There remain several durability and manufacturing issues that keep this little prize in the “wouldn’t it be nice” column, but it’s coming. And it could be here sooner than you might think.

Finally, we’re going to talk about camera and sound. These are two innovations that have already happened in Nokia’s Pureview camera and HTC’s Boomsound. However, it is likely that we have not seen the last of these two innovations. Nokia and HTC have set the bar high in these two areas, but in both cases, there is potential for more. Nokia’s challenge will be in making the Lumia 1020’s camera optics more affordable and less intrusive in the phone’s design going forward. Boomsound, while it is loud, and could lead the charge in much needed front facing speakers, still sounds like phone speakers. We remain hopeful that in the future, speaker technology can advance to a point where we can no longer tell the difference between car speakers and phone speakers, at least in terms of sound depth and clarity.

So, OEMs, Pocketnow has officially thrown down the gauntlet. We challenge you to continue to push boundaries and take risks. We want you to surprise us with technology that has started to grow repetitive and a little bit dull. Not all of the tech I talked about today is available yet, but in some cases, it’s not far off. Push, claw and scratch your way into the future and bring on the sexy.

We’re waiting to be impressed again.