All of the Google Home Mini secrets are out the day before the compact smart speaker’s formal debut, including its October 19 release date.
Published 03 October 2017, 12:12 EDT

Google may have entirely given up on trying to keep its still-unannounced hardware under wraps, losing the surprise factor of the HTC-made Pixel 2 and LG’s Pixel 2 XL phones, as well as the Google Home Mini, a refreshed Daydream View VR headset and all-new Pixelbook, over the past couple of weeks.

A genuine comedy of errors just took place in anticipation of Google’s big product launch event tomorrow, as a Twitter user by the name of Raymond Durk randomly caught a glimpse of a “GoogleHome2787” device in need of urgent setup.

Durk says he lives a mere two blocks away from Google’s Mountain View headquarters, which probably explains why he was almost able to connect to an unreleased Home Mini. Presumably, a careless search giant employee left his testing unit visible to nearby compatible gadgets while preparing its installation or performing some last-minute software inspections.

Speaking of carelessness and accidental product confirmations, Walmart made an even bigger mistake, jumping the gun on Google Home Mini pre-orders. The retailer’s diminutive smart speaker-dedicated webpage is obviously wiped clean now, but it was up long enough for a bunch of official images to flood the internet. 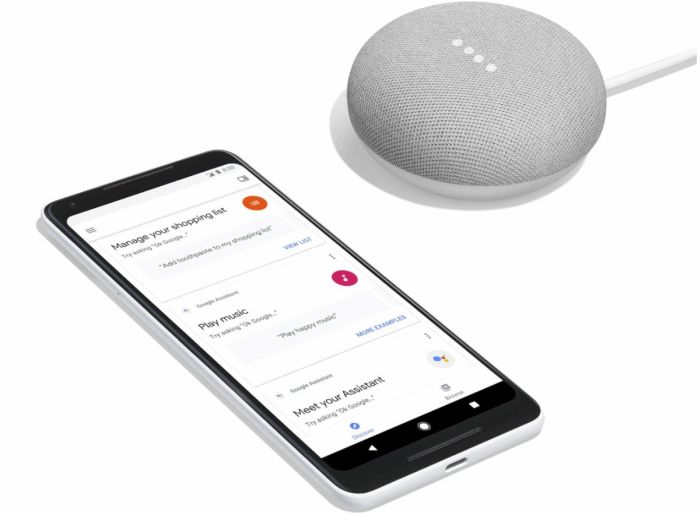 These are in no way surprising, corroborating that recently leaked compact fabric design while also providing another look at the Pixel 2 XL face, fairly generous bezels included.

This “powerful little helper” will apparently do all the things the “full-sized” Google Home can, responding to your voice, controlling your smart home, answering weather or traffic-related questions and playing music.