A video shows off what Google might do if and when it replaces Android with a revised mobile operating system. There are pictures, too.

There’s a snapshot (or, more accurately, a video) of progress in Google’s 15-month quest to develop an alternative mobile operating system, codenamed Fuchsia. That picture is of a living interface for the OS project that first appeared back in August of last year.

A video created by Kyle Bradshaw, computer handyman for Hotfix Computer Repair in Louisiana, is putting “Armadillo” on display to the public for the first time. It’s a GUI that puts emphasis on cards containing “stories” that will refer to “apps and/or modules that work together for the user to achieve a goal,” most if not all of them developed with the Flutter SDK and written with Google’s Dart language. Users could long-press and drag a story on top of another to engage the multi-window mode. 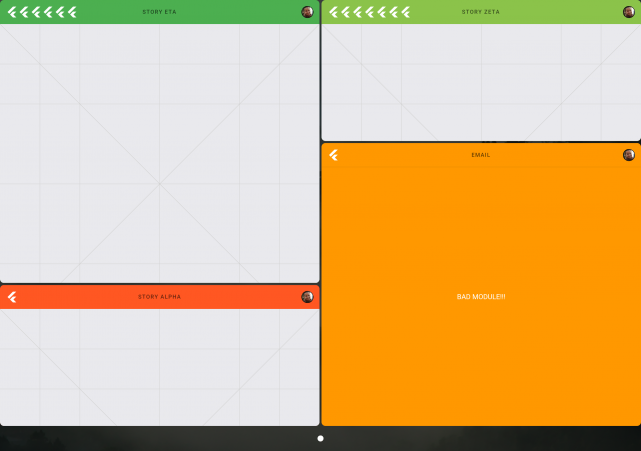 As seen in this screenshot from Ars Technica, more apps can piled on up to the point where the software just crashes — interestingly, a four-app split resulted in two stories each taking up three-eighths the screen with the remain two sharing the rest of the real estate. More pictures can be found at the Via link.

Cards remain a part of the UI for Google content, found at the bottom of the home interface, though Material Design rules get stretched out. A relevant blurb in the readme for these “suggestions” reads:

Conceptually a suggestion is a representation of an action the user can take to augment an existing story or to start a new one.

You’ll notice that system interfaces are less important in this version of Armadillo. Other than a hub for device and Google account settings found inside a user avatar, battery and time elements seem to pop up where they may — at the bottom of most story/suggestion interfaces and at the top of the pastoral home interface.

All of this was right under our noses, of course, as Google has been updating gerrits for Fuchsia all this time. Interested developers could load and compile Armadillo straight from Google’s blueprints.

Ars Technica reports that the company would move off of Android’s Linux base and onto a proprietary “Magenta” kernel. Google would also drop GPL licensing in favor of BSD and MIT open source terms as well as Apache 2.0 (that works with GPL v3) where applicable. The new house-built codes will not only allow apps to run as smoothly as 120fps, but lets Mountain View cap potential consequences of the fight over Android’s JavaScript row with Oracle.

There is no timetable for the release of Fuchsia OS. Android, Inc. was booted up in 2003 and took five years (three under Google) to finally get into smartphones. We may have yet seen the imminence of this new system and there’s the potential that we may never see it.