The Facebook app on Android is not very well-designed and kind of bloated. There are a lot of ethical reasons to avoid it too. Frost for Facebook is a web wrapper that actually brings some excellent features to Facebook on Android.
Published 30 September 2019, 21:00 EDT

Lately, I’ve been enjoying dipping into the world of “freedom friendly” Android apps that one may find within the F-Droid repository which you can install on any Android phone. I came across one app called “Frost for Facebook” which caught my eye.  It turns out… this alternative Facebook app is pretty excellent!  Frost for Facebook has been around for a while (as you can see from the original XDA-Developers thread), and it has seen some struggles with being blocked from the Google Play store a long with Facebook’s attempts at blocking it as well, but it’s very much worth using for the features that it brings.

As you know, Facebook is probably the least trustworthy tech company around right now, so there are many who simply deleted the Facebook apps completely.  I still like to keep up with the personal lives of my friends & family on Facebook though, so I deleted Facebook Messenger instead and used regular Facebook only through the web browser.  Facebook’s mobile browser version works quite well with support for push notifications and uploading images, but Facebook intentionally denies access to direct messages from a mobile browser. This is because they really really want you to install their Facebook Messenger app which is very good at scraping data from you and your friends which Facebook can then use to sell more advertisements and profit profit profit. Personally, I chose to just tell everyone that I don’t use Facebook Messenger anymore and to please use a more decentralized ethical and moral friendly messenger like email or Matrix.

Frost is one of the few ways to get Facebook direct messages on your phone without the spyware app!

Now, Frost for Facebook is mainly just a web wrapper for the Facebook mobile website, but it adds a lot of really nice user interface tweaks. 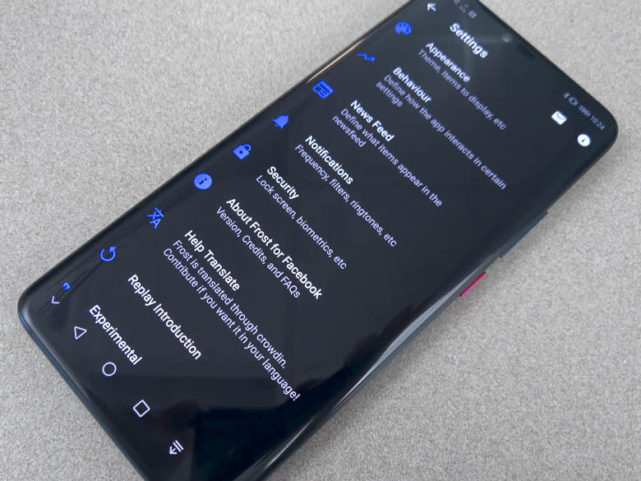 The settings area is filled with ways to customize your Facebook experience. 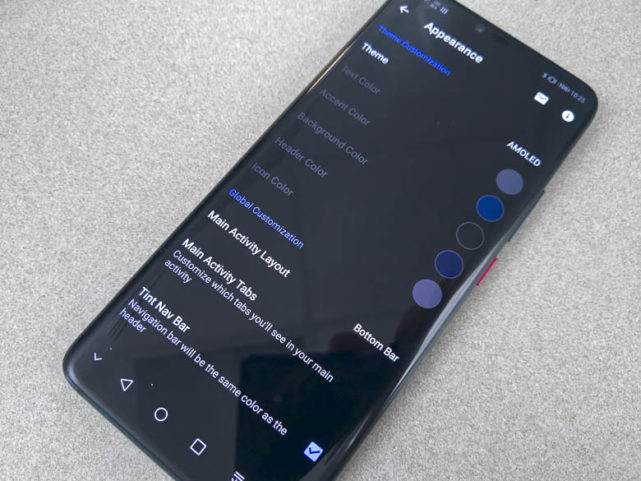 An extensive theme interface is one of my favorite features.  You can switch everything to OLED dark mode to save battery life or change the colors to whatever you want to make it look good.

The “Main Activity Layout > Bottom Bar” option is another huge help in fixing the Facebook interface. Normally Facebook puts these buttons at the top of the screen where normal human hands can’t reach them while holding a phone. With this option, they’re moved to the bottom so that you CAN actually use them!

That’s enough to sell me on this Facebook app, but wait, there’s more… 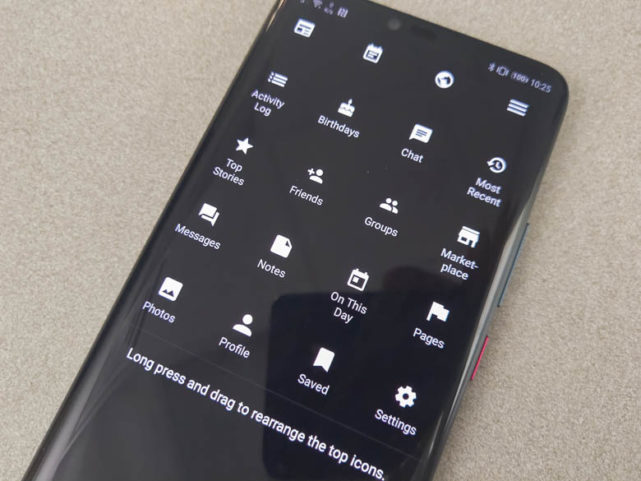 Those Facebook navigation bar buttons are actually customizable!  You can actually choose the three Facebook sections you use the most and add them to that navigation bar yourself.  This is one of those things that really should have been a part of every single smartphone app ever made from the beginning.

Frost for Facebook is also completely open-source and free. That means you can fork it on GitHub if you feel like making your own modifications to it. And you can sideload it on any Android phone without the privacy problems of the Google Play store.

Overall, I’m really happy with Frost for Facebook.  I do wish it would show itself in the “Share” buttons of other apps, but I can still post pictures by going to the app first.

Rumors suggest that the Google Pixel Fold could arrive with 120Hz display, and Samsung could give us an ‘old’ camera in the Z Fold 3

Today's best phone deals come from Samsung and Amazon, where we find the latest Samsung…