You can get a free Nokia Lumia 1020 or 1520 from Microsoft if you trade in your old Apple iPhone or Samsung Galaxy phone, though there are some conditions.
Published 06 February 2014, 04:29 EST

If you have an Apple iPhone 4 or iPhone 4S, chances are you’re waiting for the iPhone 6 to come out, as you’ve probably skipped both the iPhone 5 and iPhone 5s. If you have a Galaxy S II from Samsung, you should be excited about the MWC Unpacked event where the S 5 might land, as you apparently skipped the S III and S 4.

However, Microsoft wants to take advantage of your hesitation and has an offer which you should definitely consider if you are willing to give Windows Phone, and its surrounding ecosystem, a chance. If you trade in your iPhone 4, iPhone 4s or Galaxy S2, you can get a free Nokia Lumia 1020 or Nokia Lumia 1520 device from Microsoft.

A couple of things to note though: they’re both offered on AT&T’s network in the US and a new two-year contract, or an upgrade is required. You have to also make sure that the devices you’re trading in are in good shape, so no handing in your bricked or exploded old daily driver.

There’s also a time limit attached: the offer is valid starting February 3 and lasts until March 2, 2014 (or, of course, while their supplies last, in case every one of you rushes to take advantage). You can find even more details at the source link below. 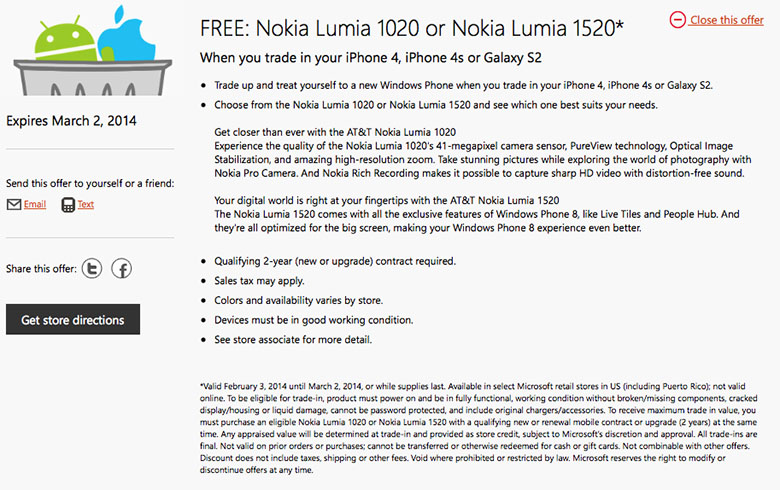 Source: Microsoft
Thanks everyone for the tip!