Forget the Mate 20 Pro, check out the Huawei Mate 20 Lite

Want some Huawei-level photography, but can’t shell out your kidney to get it? Consider the Mate 20 Lite, coming out later this month.

What’s your idea of a “Lite” phone? One that has 16 cameras on its back? Oops, sorry, wrong “Light.”

Anyways, we’ve grown accustomed to a Huawei “lite” phone as being a diminutive version of what a standard P or Mate iteration is. The latest generation for the P20 series is the P20 lite or P smart or Nova 3, depending on which branding any particular market goes with on a whim.

But later on this year, the Huawei Mate 20 lite could provide mobile value seekers with the specs they need at a price that works for them. WinFuture has obtained all the specs as well as renders and prospective availability information — if you only read this far, it will be coming very quickly.

Huawei has opted to include dual cameras and a fingerprint sensor on the glass back of the device, which itself features tapered sides that are reminiscent of the Galaxy S6 edge. On the front is a 6.3-inch wide LCD at 1080p resolution, though a notch cuts its way into the top of the screen and a little chin action squeezes in from the bottom. We see gold and black colors in the leaked cache, which you can peruse in full glory at the source link. Editor Roland Quandt suggests that this design is based off of the Huawei Mate 10 Porsche Design limited edition model. 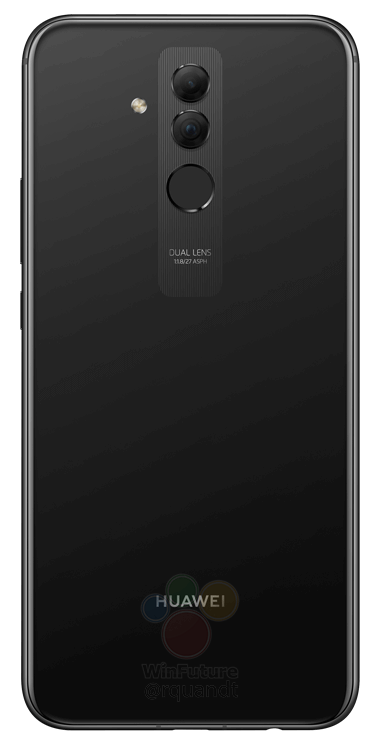 More on the cameras: both selfie and rear sides will have dual cameras with the secondary unit being a 2-megapixel sensor for depth effect enhancement. The main front unit will be 24 megapixels while the back will be 20 megapixels and feature an f/1.8 aperture, a very fast offering not typically seen in low-end options — this suggests that this phone isn’t exactly a budget phone.

The Kirin 710 systems-on-a-chip from Huawei’s HiSilicon subsidiary has appeared on the recently-introduced Nova 3i, essentially a spec update to the Mate 10 Lite form factor, and it will appear on this device, too. Up to 6GB of RAM and 64GB of internal storage will be offered, though it isn’t clear if there’s room for microSD. A fairly generous 3,650mAh will power the experience.

With all that being said, it’s actually quite reasonable to hear that the phone will run for $400 when it debuts at the end of this month, or so the sourcing goes. This leads us to ask about what you think of the Mate 20 Lite and, if you can’t afford a Mate 20 Pro, would you buy it?