Getting a tablet UI on the Nexus 7 is as easy as a display density tweak, though there are a few small irregularities.

One thing you may have noticed about the Google Nexus 7 tablet from the early reviews like the one we put together is how Google decided to give the model a phone-like UI instead of the tablet interface you might expect. With just a seven-inch screen, we can understand Google’s decision, but if you’re curious to check out how Jelly Bean looks on a full-fledged tablet, there’s a simple adjustment you can make to activate the tablet UI.

Like so many Android tweaks, this one comes down to the device’s build.prop file. By default, the Nexus 7’s pixel density, recorded in the ro.sf.lcd_density setting, will be set to 213. Modifying that figure down (both 170 and 160 have been suggested as acceptable values) causes Android to switch-over to its tablet UI. You can either do that by hand the old-fashioned way, or employ an app like BuildProp Editor to make things a tad more convenient.

It’s not a 100% perfect solution, as some things aren’t scaling correctly; you’ll want to adjust font sizes, for instance, but this is still a good start, and we’re sure we’ll see a lot more Nexus 7 tweaks once orders for the tablet start shipping later this month. 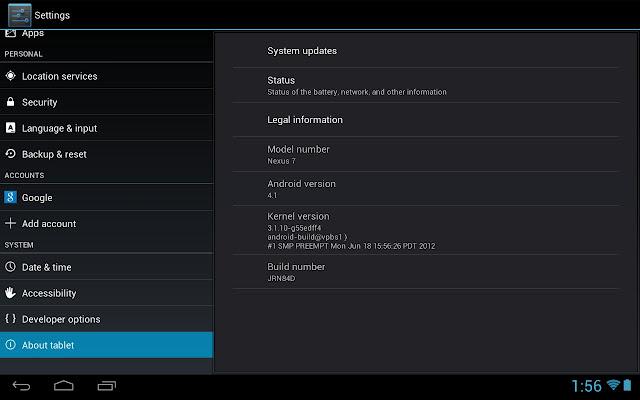