If you’re an Android power user you’re probably familiar with the name Francisco Franco. The franco.Kernel updater app (and associated Franco kernels) have long been a favorite among rooted users – myself included. But what happens when a developer turns their attention and talents away from kernels and governors and optimizing for thermal thresholds? In this case, they turn their attention to your pictures.

Not long ago Google updated (or “replaced”, depending on who you ask) its Gallery app with “Photos”. Don’t get me wrong, Photos is an awesome app with cloud integration, zooming, and the power of Google behind it to aid with searching and auto-tagging. Despite being a very powerful tool, it relies heavily on the cloud, and a lot of people hate it. (I, for one, welcome our new robotic overlords.) 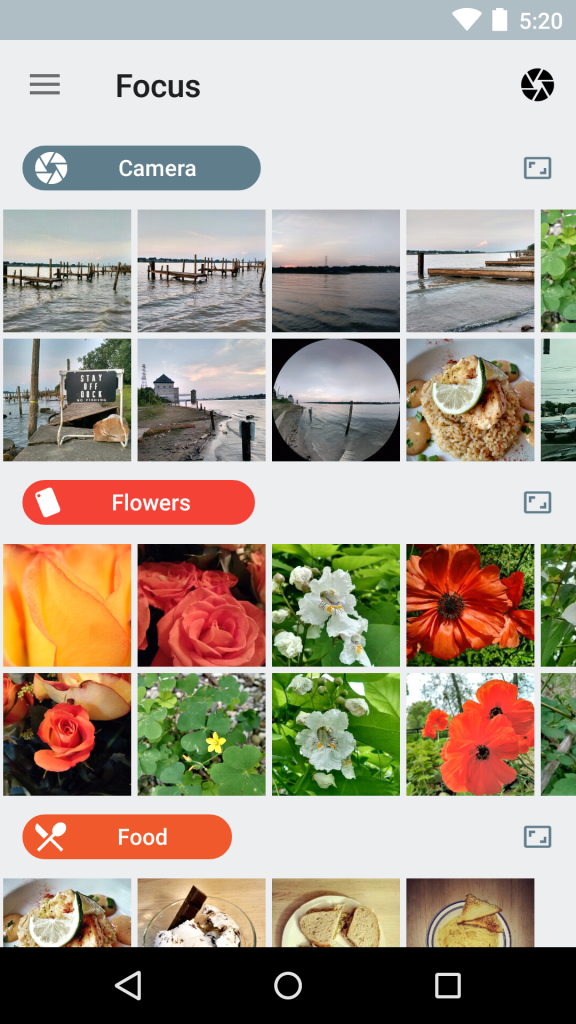 That’s where Focus comes in. At its minimum, Focus is a replacement for the Gallery app that Google removed when it pushed Photos on all of us. It’s also much, much more.

According to its developer, the aforementioned Francisco Franco, “Focus is an incredible new kind of gallery, perfectly tuned for speed, efficiency, and ease of use”. So, what does it do? First of all, it’s an offline gallery – meaning it handles all the pictures on your phone or tablet. Any image (including screenshots), GIF, or even video stored on your device is cataloged and organized into collections, allowing you a top-level view of your images, then lets you quickly and easily dive deep to find the exact picture you’re looking for.

Rather than automatically tagging all your photos (by a computer on the Internet somewhere, which doesn’t sound creepy at all), Focus lets you tag your own photos however you’d like. It ships with a fair amount of presets (like Art, Family, Food, Friends, and more), but the Premium edition lets you add your own, too!

Next up is the interface – a nice Material-esque design. Most gallery apps combine viewing and editing into one app, and one interface. Focus doesn’t do that, well, not exactly. Focus still lets you edit your pictures, but when you’re just looking at them it hides the editing tools so you can see your images without distraction from a spattering of editing icons that you may never use.

Then there’s my favorite feature, I call it “keep your frackin’ nose out of my pictures!” It’s really called “Lock horizontal swiping” and it enables a PIN-protected “No snooping” interface that allows you to pull up a picture and hand your phone to a friend, relative, or co-worker, and not be embarrassed when they start swiping to see what “other” pictures you’ve got on your phone. I’m as vanilla as they come, but even I don’t want to hand someone my phone to show them pictures of my new house and have them swipe and see vacation pictures of my family in their bathing suits at the beach.

To take this one step further, an upcoming version for Focus is reportedly going to include a new feature that will add a “secret vault” to help you keep all your “personal” pictures private and protected behind a PIN (or other security measure).

We’re eager to see what Francisco Franco still has in store for us and are excited to see at least one well-respected developer eschew the cloud and embrace offline storage. Go out and give Focus a try, and if you like it, make sure you consider upgrading to the Premium features (via an in-app purchase) to help with development costs!