User interfaces are going flat. What comes after that?

More developers are beginning to use flat user interface design. This is just one of many phases mobile UI has experienced. Read to learn what’s next.
Published 05 June 2013, 16:20 EDT

Interface design on mobile platforms has undergone some massive improvements and countless changes since the beginning of smartphones. Mobile operating systems in the BlackBerry era were heavily engineered and barely had the warm touch of a designer well-versed in user experience, if at all.

It had a hint of an “Oh, that looks good … let’s use that!” feel. Icons weren’t a uniform size, nor did they have any sort of theme. The BlackBerry Settings app was nothing but a stark, bare text list of settings that stretched several pages deep. To say it was convoluted is putting it lightly.

In short, Windows Mobile, BlackBerry, and Palm OS were not for the wary. They weren’t user-friendly and took hours, days, and even weeks of tinkering to figure out and become familiar with, particularly for new users.

Along came iOS, which delivered a kick in the rump for the aging platforms. The interface and user experience were geared towards average users. It was simple to use, easy to figure out, and it looked nice. And when Android finally rolled out, it looked like a hodgepodge of all the OSes.

Mobile platforms – the ones that didn’t die off, that is – were updated with glossy, 3D icons and interface elements that, at least at the time, looked great and … refreshing. Android alone went through a handful of interface changes that were sometimes conflicting with multiple accent colors, and transparent elements were all the rage (Froyo and Gingerbread especially).

Now is all the rage. 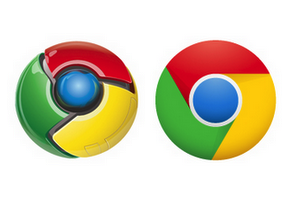 Windows Phone is the epitome of flat. No shiny, 3D elements are to be found in its typographic, tiled interface. Google has gone flat with all its services, too, the most surprising of which was the shiny Chrome logo going 2D over two years ago. And ever since, everything Google has gone flat. Google+, the cards in Google Now, Gmail, Keep, Drive, and Calendar are only some of the many examples. Even BlackBerry took its platform flat with BlackBerry 10. The standard backdrop for icons on the home screen is still transparent. But, for the most part, BlackBerry 10 is quite flat.

With iOS 7 said to be going flat, almost everything is becoming streamlined, simple, and somewhat standardized. The muck is being cut at virtually every turn (so long as you don’t count TouchWiz and other over-processed custom Android interfaces).

My personal setup is about as flat as it gets. I explained last week that I use the Stark icon pack and Playbars atop Action Launcher Pro for a very flat and clean home screen on my Android devices.

The question now is: what comes next? What interface “fad” comes next?

Skeuomorphism and photo-realism (leather-bound notepad apps, animated page turns in eReader apps, etc.) are being used less and less. Everything is being flattened to very near their simplest forms. So what will happen next? Monochrome? Undesign?

It’s important to look at these changes in interface designs as progressions instead of fads. It makes much more sense. Little thought or care was used in early smartphone platforms. Such was the same for early Windows and Mac OS builds. And the longer they were around, the more thought was put into the user experience.

Enter what many refer to as skeuomorphism. In interface design, a skeuomorph is the use of real-world elements to help users associate and relate to their software versions. For example, a calendar application (see above) may bear a faux spine down the center and spread pages along the edges to indicate that pages can be turned. This is done to create a familiar interface for users to reduce the shock of a new experience.

In the beginning of touchscreen UIs, skeuomorphism and photo-realism were imperative for easing new smartphone buyers into a less daunting interface and to soften the learning curve.

But as more and more consumers are picking up smartphones for the first time, thus learning and becoming comfortable with touch interfaces, familiar with how they operate, the less useful and important skeuomorphs are. Interacting with digital versions of various physical mediums (calendars, notepads, clocks, etc.) becomes second nature. Visual relationships are needed less and less, hence flat interfaces, or “undesign” as some are calling it – removal of unnecessary interface elements.

The look forward is always the most difficult part. But looking back and seeing these transformations as natural progressions rather than “fads” can help shed some light on where interface design will go in the not too distant future. Admittedly, I’m not an expert on design, UI, or UX. Sure, I’m intrigued by it – possibly more than your average Joe. And I’m sure some who have studied design and UI will cringe at some of the things I’ve written here.

But I think it’s fair and safe to guess this so-called “undesign” will continue. That many of the interface elements will begin to disappear as more and more individuals become familiar with how mobile operating systems work.

One change we’ve seen alongside all the software improvements is the reduction of physical or capacitive buttons on hardware. Whether for the sake of hardware costs, the removal of moving parts or virtually any other reason, the result is the same: gesture-based input is becoming more natural and less gauche.

Off-screen swipes, multi-finger pinches, and other various gestures will replace many on-screen elements. In fact, they already have to some degree. The infamous pinch-to-zoom has almost totally replaced the antiquated physical zoom in and zoom out buttons. A swipe down from the top of the screen on iOS reveals Notification Center while a swipe up from the bottom on BlackBerry 10 will minimize the application you’re in and take you back to the home screen. A five-finger pinch while in an app on the iPad will close the application and take you back home, while four-finger swiping left and right will quickly switch between recent apps, and a four-finger swipe upward reveals the most recent applications.

When using my iPad, I rarely use the physical Home button, except to open Google Search with a long-press. It’s faster, more efficient, and requires little effort. But it remains a hidden feature, as most (average consumers) don’t even know these gestures exists in iOS.

Are gestures the future? It’s impossible to say. But it’s certainly one of the next (and currently ongoing) steps in a long line of progression. Gestures remove on-screen elements, preserving real estate for more important content.

The biggest disadvantage is the learning curve, which can be dampened by slowly implementing gestures without immediately removing the interface elements. This is exactly what Apple is currently doing. It causes some redundancy, but that’s a small price to pay for a better overall experience some time down the road.

The other possibility is various peripherals taking over, such as smartwatches (a la Pebble) or Glass that begin to put as many things in the background as possible.

What say you, folks? While flat design looks nice, it isn’t the end of the road. We’d be up in arms only a year or two from now. So what’s next? Gestures? Peripherals? Sound off below with your thoughts!

The box will now include the phone and a USB-C to Lightning cable.