Carl Pei on the OnePlus One: we could not have done any better for this first device

We discuss the “Flagship killer” OnePlus One, its creation and the vision behind it with Carl Pei, the company’s director.

Before December 2013 few had ever heard of OnePlus. These days however, the Hong-Kong based company and its recently launched handset are all over the news. OnePlus promises its consumers they will never have to settle when choosing their next smartphone.  Indeed, the OnePlus One boasts some impressive specs and an equally impressive price-tag. Although currently the purchase of the One is possible through an invitation system only, increased availability is expected in late June. Until then, we sat down with the company’s Director, Carl Pei, to discuss the OnePlus One, its creation and the vision behind it. 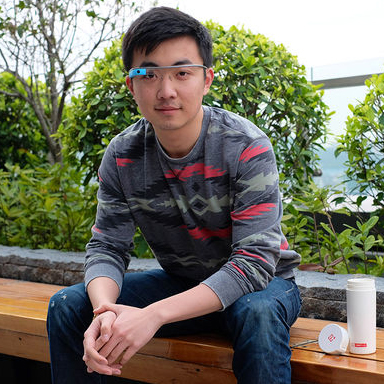 Pocketnow: OnePlus is based around the motto “Never Settle”.  What exactly does it mean in terms of the philosophy and the vision behind the company?

Carl Pei: ‘Never Settle’ means taking conflicting needs and making the best choices. This means fitting as much screen as possible into a device that still feels good in the hand, including a battery that will get even the most active users through a full day of use, and offering a device with plenty of storage while still being light and compact. We made a phone that simply delivers the best day-to-day experience rather than load it with gimmicks and bloatware.

P: There are so many players in the field of mobile technology, all in rivalry for the crown. Your goal is quite ambitious considering the competition. What made you want to do this? Was there a particular “aha” moment that made you think “we can do this better than anyone else”?

CP: Pete, our CEO, started thinking about building his own brand a few years back when he was representing the Oppo Blu-ray division at CES. The Oppo Blu-ray is widely considered the best in its class and people from around the world approached him to compliment him on the product. He was overcome with pride at having been part of a company that reached a global audience. Moving into the smartphone market allowed him to continue that with a device that would reach even more people. The opportunity to start OnePlus came to him in late 2013 and he just couldn’t pass it up. Pete is a guy with a lot of experience and passion for the tech industry. While he knew he would be late to the game in terms of hardware, he was confident in the device his team could make and the advantage of being early to the game of selling via e-commerce.

P:  Walk us through the process of creating the OnePlus One. What were the most important issues you had to take into consideration?

CP: Of course you have to look at the available components. From the beginning, it was important for us to only build a device that we were proud of and users would be proud to own. That meant having access to the latest and fastest hardware. Pete has been in the industry a long time, during which he developed close relationships with great partners, such as Qualcomm, Sony, and JDI. We also knew it was important to take customer feedback and make decisions based on what we heard. We needed to cut through the noise and find a way to solve the root of the problems. For instance designing a larger screen into a smaller frame. Or making the battery non-removable to cut down on size, but making it more powerful and longer lasting. We will continue to listen to our users to try and satisfy as many as possible in the future.

P: I understand you’re working with Oppo to manufacture the phone. Could you tell us more about it? How did that come to be?

CP: Our CEO, Pete Lau, is the former VP of Oppo and decided to use Oppo as our contract manufacturer for the OnePlus One – their factories are producing it. It made sense for us to use these resources as we’re confident in the factory and familiar with the system.

P:  You have quite an active community on your forums and social media. Did the users have any input into the creation of this phone? How important is their opinion to you as a manufacturer?

CP: In the beginning, we were still selecting hardware for the One and listened to the user feedback as we made those decisions. Multiple members of our team read every post that is written on our forums and social media pages; we very much value our fans’ opinions and use their feedback to gauge the direction in which we are going. We found a way to upgrade to the Snapdragon 801 processor after reading our fan’s thoughts. We also worked with CyanogenMod to let fans choose between on-screen and capacitive keys because there was such an even split in people’s preference.

P: Making a phone that would allow a consumer not to compromise on performance, build quality and price sounds very challenging; would you say you’ve successfully overcome that challenge? If so, what would you say is currently your biggest obstacle?

CP: We believe that the One is the best available smartphone on the market in terms of design, performance, and build quality. If we didn’t believe that, we wouldn’t have made it. Of course, not everyone will agree with us but we are confident that we could not have done any better for this first device. The biggest obstacle is probably going to be teaching potential users about the high quality of the One and the rigorous testing that the device undergoes. Since we are currently selling exclusively online, people can’t play around with the device in a store before they purchase it. We need to find ways to demonstrate the incredibly strong build quality of the One.

P: On your site you claim to have discovered new ways to incorporate more technology with no extra cost. Could you tell us more about that? 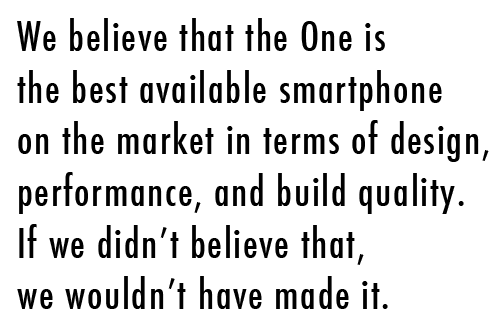 CP: We are allocating our resources in a way that better benefits the user. We rely on online marketing and social media to spread the word about our brand and sell our phones exclusively via e-commerce to remove the costs of retail partnerships.

P: You seem to be extremely confident that the OnePlus One phone will be superior to the products of other manufacturers, going as far as calling out the competitors with provocative posters on your site and social media.  What do you think makes the OnePlus One a better handset than other flagship smartphones, such as Oppo Find 7 and Sony Xperia Z2?

CP: The One offers flagship specs with incredible design and build quality. It also features great software and, perhaps most importantly, was made together with our fans.

P: Geographically, what are your main markets? Where is the OnePlus One going to be available?

CP: The OnePlus One will be available in Austria, Belgium, Canada, Denmark, Finland, France, Germany, Hong Kong, Italy, Netherlands, Portugal, Spain, Sweden, Taiwan, United Kingdom and United States when it is launched with potential for more markets in the future.

P: And finally, what can we expect from OnePlus in the future? Are you planning on making any other mobile devices, perhaps a smartwatch? Where do you see the company a year or two from now?

CP: We are solely focused on the OnePlus One right now; it will be the only device of 2014. We are of course thinking about the future but a lot of that depends on how the launch of the One goes.