Five Sharp smartphones are coming to Europe in June, including E-F1 ‘flagship’ with IGZO screen

For a company that can objectively claim pioneering work in the smartphone bezel-reducing field back when it wasn’t owned by Foxconn, Sharp left many unimpressed recently with the Essential Phone-inspired Aquos S3 mini and iPhone X-similar Aquos S3.

But the Japanese LCD screen specialist also has a different “flagship” handset in the pipeline, tentatively scheduled for a June launch in Europe. Carrying model number E-F1, the 6-incher is today tipped to use a so-called “Free Form” IGZO display with WQHD+ resolution.

That’s a whopping 3040 x 1440 pixels, mind you, narrowly beating the 2960 x 1440 count of existing ultra-high-end phones like Samsung’s Galaxy S9 and S9+. Unfortunately, it seems that the 19:9 Sharp E-F1 will borrow its relatively large “chin” from the Aquos S3 mini, featuring a front-mounted fingerprint sensor, as well as a small screen cutout at the top.

Meanwhile, the “premier” E-P1 looks and feels even more familiar, basically replicating the iPhone X-cloning design and most of the specs of the China-first Aquos S3. The only difference seems to be a Snapdragon 660 processor, upgraded from a 630 on the S3, whereas the E-F1 packs a top-of-the-line Snapdragon 845 SoC. 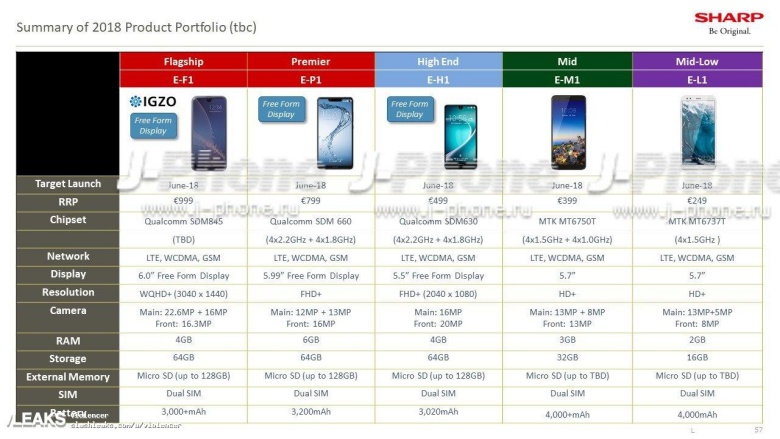 Weirdly enough, Sharp’s European flagship is expected out with only 4GB RAM and a “3,000+mAh” battery, although the 22.6 + 16MP dual rear-facing cameras and single 16.3MP selfie shooter sound a little more impressive.

We can’t say the same about the specs of the “high end” E-H1, which is an exact copy of the Aquos S3 mini, let alone the “mid” and “mid-low” E-M1 and E-L1 with HD+ screen resolution and modest MediaTek chips.

All five of these should see daylight this summer, but we sure hope those leaked RRPs are not final. €999 would be an absurd price point for the E-F1, and the same goes for a prospective €799 E-P1. €499 is not ideal as far as the E-H1 is concerned either, while the €399 E-M1 and €249 E-L1 are probably doomed no matter their retail costs.