Five Things I Want On the Nexus 5

Most agree that the Nexus family is the soapbox from which Google illustrates to manufactures, customers, and sites like Pocketnow what a “real” Android-powered device should be like, and roughly what an unsubsidized smartphone or tablet should cost. Google’s Nexus 4 was released in November 2012 and is the latest in their flagship line of smartphones running the Android Operating System. It was the first joint venture between Google and LG.

We’ve just passed the 3-month mark on when the Nexus 4 came to market. If history is to serve as an example of the future, the next Nexus handset should be announced in May, at Google’s I/O event. Although the Galaxy Nexus wasn’t announced by name at Google I/O 2011, the fact that there would be a “next Nexus” was.

Since we’re probably safe in assuming that Google will continue the tradition of Nexus-family devices, it’s time to ask what I’d want included in the “Nexus 5“?

Virtually every smartphone includes a camera these days. The quality of the pictures taken with those cameras, however, can vary from “amazing” to “Snow White in a Snow Storm”. Overall, I’ve been satisfied with the camera on my Nexus smartphones — but I’m just a point-and-shoot kind of guy that rarely carries a dedicated camera around with him.

There’s no reason photos from guys and gals like me can’t look every bit as high quality as those taken with high-end cameras. We have the technology, it can be done — Nokia has shown us how wonderful pictures from a smartphone can (and should) look. It’s not all about the megapixels or “ultrapixels”, it’s about more than that.

Luckily I’m not alone on this one. We recently reported on a post from Google’s Vic Gundotra about preparing for a vacation and debating whether or not he would take his DSLR, or let his Android’s be his camera. 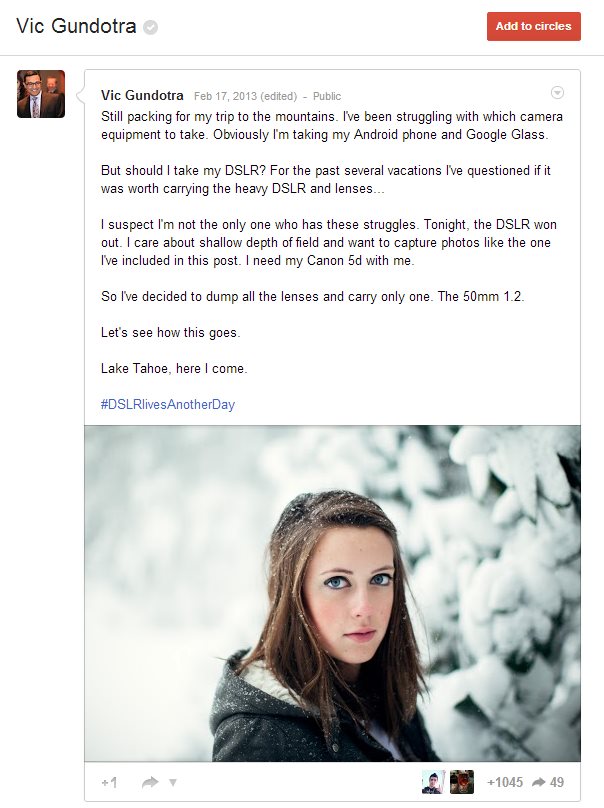 In the end, “the DSLR won out”… but Google knows they have a long way to go in camera technology, and they’re working on it.

Another shortcoming of the entire Nexus Family (from the Nexus S on up) has been the deliberate omission of an SD Card slot. I get it: Google wants to push users to their cloud offerings for Music, TV, and Movies. I don’t disagree with that. However, it’s insulting to think that everyone everywhere will always have a data plan with bytes to spare, and one that provides sufficient coverage to allow media streaming from everywhere.

It’s not realistic now, and probably won’t be realistic for decades to come.

To add insult to injury, in addition keeping SD Cards out of Nexus devices, Google had the audacity to remove USB On-The-Go capability that would have let us connect thumb drives to our USB ports to provide the missing storage. Way to go Google.

This is a no-brainer: accessories for the next Nexus need to be available the same day the phone is. No more of this three-months later stuff. Chargers, cases, desk and car docks should all be available to purchase and be delivered with your order of the phone. I can’t say it any simpler that than.

To customers, lack of accessories symbolizes poor planning or lack of faith in a product. To third party manufacturers it’s a golden opportunity to take what revenue you could have gained and put it onto their balance sheet instead — except many do it so cheaply that their accessories soil the reputation of your product.

I’m amazed at how slippery and “squeaky” the Nexus 4 is. Both indicate a level of quality that I wouldn’t normally associate with a flagship product. Some of you will say that the Nexus 4 only costs US$350 and I should “expect” shortcuts to have been taken to meet that price point. To them I say “No. This is a flagship, it should still look and feel like the leader.” It should be the device that the other devices are jealous of — that includes build quality.

I recently had a death in the family. Though the whole ordeal, my Nexus 4 was by my side. I was able to arrange time off work, communicate with the family, and even take pictures as the Honor Guard from the Unified Police Department stood guard over my brother’s casket hour after hour and escorted the family to the cemetary. I thank my son for his foresight of bringing a wall charger with him. Taking pictures and using so much data and “screen-on” time chews through batteries quickly.

Standby time on the Nexus 4 is great, however when the screen is on and data is flowing, it doesn’t last as long as it should. Rooting and using a custom kernel help significantly with the Nexus 4, but I didn’t have time to do so after my little accident with my last Nexus 4. Honestly, I shouldn’t have to.

This isn’t just a Nexus thing or even an Android thing. Batteries need to be bigger and devices need to better regulate their power consumption.

I would suspect that the next major version of Android (version 5.0 which will probably be called “Key Lime Pie”) will be introduced at Google I/O and will come out first on the Nexus 5. Since this is a topic in an of itself I’ll leave it for another day, but I expect significant changes and beautiful advancements to the entire Android experience. Don’t you?