If you like Fitbit’s wearable hardware, but feel the software is still somewhat rudimentary, you’ll be happy to hear a couple of key new features are now enabled on both the Versa and Ionic.

Billed (somewhat pretentiously) as “the smartwatch for all”, the $200 Fitbit Versa has been up for grabs “globally” for a few weeks now, but a couple of its most interesting features advertised as top selling points back in March are being enabled a little late.

It’s probably not too late, though, and besides, both female health tracking capabilities and quick replies are coming to the affordable Versa, as well as the costlier Fitbit Ionic smartwatch, available right now at $250 after a nationwide $50 markdown.

Ironically, while quick replies are only accessible to Fitbit users connecting their wearables to Android phones, menstrual cycle supervision is rolling out to iOS and Windows apps first, expanding to Android by the end of the month.

According to the veteran US-based fitness tracker manufacturer, 80 percent of women don’t know how many phases are in a menstrual cycle and more than 70 percent are unable to correctly identify the average length of a cycle. 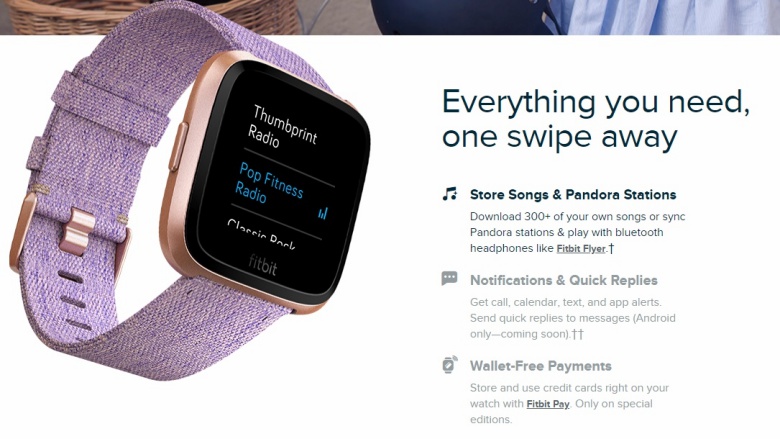 Enter a simple but detailed and comprehensive tool aiming to help the ladies gain a better understanding of how their body works, as well as providing “personalized insights” into how your cycle impacts your activity, sleep, weight and nutrition, and “potentially how these things can affect your cycle.”

In a nutshell, Fitbit is trying to offer a universal female health monitoring platform, correlating all the information the Versa and Ionic are capable of collecting rather than simply logging your menstrual cycle dates and predicting when “that time of the month” will start next.

As for quick replies, you get five pre-set options, including “Yes”, “No”, “Sounds good!”, “Can’t talk now”, “Will reply later”, and “What’s up?”, which you can easily customize to your liking as long as you don’t go over a 60-character limit.

You can use these for text messages and messenger apps, with notifications from your phone displayed on your wrist, and no need to hold said phone anymore to get (a few) things done on the fly.