Priced at $300 to undercut the Apple Watch Series 2, the long overdue Fitbit Ionic brings a great deal to the table, but no cellular connectivity.
Published 28 August 2017, 10:06 EDT

Forget the $200 Blaze “smart fitness watch”. The time has finally come for one of the world’s top wearables vendors (the number one until not long ago) to try its hand at a full-blown smartwatch.

It’s reportedly been an uphill struggle for Fitbit to get the Ionic and proprietary Ionic OS ready for primetime, but the American activity tracking specialist can be happy it’s beaten the Apple Watch Series 3 to market.

Well, sort of, as the financially-hurting company currently only accepts pre-orders on its official US website, expanding them to “select online retailers” tomorrow, and promising in-store availability worldwide “beginning October 2017.”

At $299.95, the Fitbit Ionic is cheaper than an entry-level Apple Watch Series 2, boasting many similar selling points and the typical focus on personal coaching and general wellness. But there’s no standalone cellular version, and that’s likely to prove an important disadvantage compared to the upcoming third-gen “iWatch.”

The design may also divide consumers and potential buyers, eschewing the traditional wristwatch sense of style, though you can choose from 15 clock face options “ranging from sleek and understated to fun and fitness-focused”, not to mention a bunch of “high-quality accessories. Namely, buckles, “Sport Bands” and leather straps in various colors. 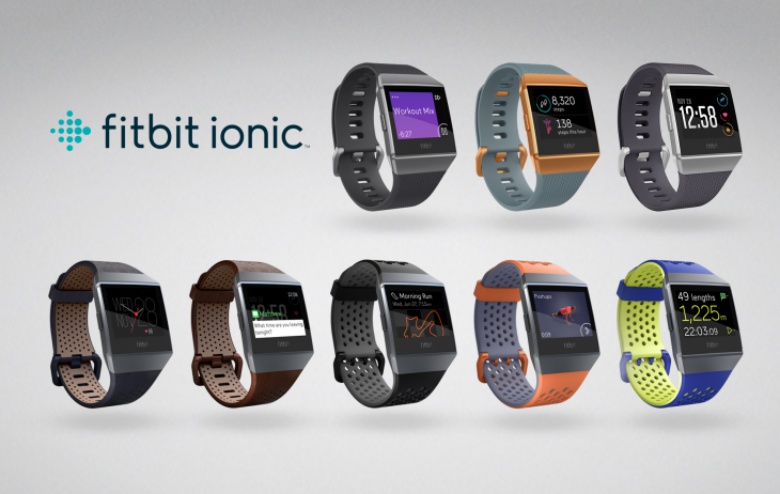 Billed as a multitasking “all-in-one watch”, the Ionic has predictably not been able to build much of an app store from scratch. Still, its “leading partner apps” at launch include Pandora, Strava, Weather from AccuWeather, and Starbucks, with any developer welcomed to use the Fitbit App Gallery-designed Software Development Kit starting next month.

Fitbit Pay integration is probably the most surprising feature available right off the bat, allowing you to make purchases “wherever contactless payments are accepted”… as long as you use a MasterCard or Visa credit or debit card from “top issuing banks in over 10 markets.” That includes ANZ, Banco Santander, Bank of America, HSBC and Royal Bank of Canada, with “more countries and banks planned soon.”

What else? Oh, yeah, of course you get built-in GPS, “multi-day” battery life, water resistance up to 50 meters, continuous heart rate monitoring, in-depth sleep insight and 2.5GB user-available storage for more than 300 songs. Not too shabby, but only time can tell if this Apple Watch “killer” has enough weapons in its artillery.

VIVO’s latest true wireless earbuds come with an IP54 rating and are claimed to last 27 hours on a single charge, but they lack wireless charging support.

To recall, Samsung used a digital bezel for the Galaxy Watch Active series that used…