At $99.95, the Fitbit Ace wearable unsurprisingly lacks built-in GPS, heart rate monitoring and other high-end features. But your kids probably don’t need any of that stuff anyway.

In response to the Garmin Vivofit Jr… from a couple of years ago, Fitbit is today launching its first-ever kid-focused activity tracker in addition to the company’s second, more affordable smartwatch.

Of course, the Fitbit Ace is even cheaper than the $200 Versa, at $99.95, coming to stores “worldwide” sometime in Q2 2018 (between April and June, that is), following an immediate pre-order start.

Coated in your… child’s choice of electric blue or power purple, the flexible elastomer wristband of the Fitbit Ace is both adjustable and showerproof. The actual wearable device body is likely to look familiar, borrowing heavily from 2016’s Alta design.

That’s not a bad thing by any means, as the entire family can now match their fitness trackers and take part in daily and weekend competitions, as well as a 5-day Family Faceoff step challenge to see who can be most active. 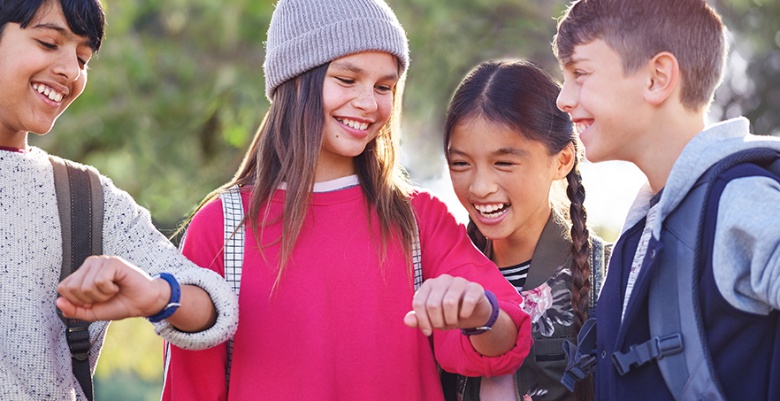 Obviously, Fitbit’s goal is to encourage kids (aged 8 and older) to move more while having fun, which is why parents can choose symbolic rewards like celebratory messages and collectible badges for certain achievements and regular progress.

Adult supervisors of Ace users hold full control over what type of information is accessible in the Fitbit app and who their children can connect with. Smartphone notifications are also supported for both Android and iOS synchronization, while fancy, grown-up functionality like heart rate monitoring is unsurprisingly left out. So is built-in GPS or NFC, but the Fitbit Ace does track sleep duration along with steps and active minutes. It also touts “up to 5 days” battery life, although in real life, you can probably expect to see significantly shorter endurance times between charges, depending on “use and other factors.”