Facebook reports bad quarter, and loses $120B in the process

Facebook will surely recover from this bad business day and hopefully it will regain the trust lost after the Cambridge Analytica privacy scandal
Published 27 July 2018, 11:38 EDT

It seems that the privacy scandal is costing Facebook a lot. Yesterday the company reported disappointing second quarter earnings which made investors dump shares. A total drop of 19% that translates directly into a $120 billion loss makes this he largest one-day fall of market value that a any company has ever suffered. Just so you have an idea of how big Facebook’s losses are, it’s roughly the equivalent of how much companies like McDonalds and Nike are worth in one day.

Facebook has been living a sharp slowdown in sales growth and it’s been spending money to improve their security and privacy features. Investors have set their eyes on other companies like Amazon, Apple and Alphabet that have grown more than 50, 15 and 20% respectively. Now the company that has grown the most in market share value is Netflix with almost a 90% in stock value. Facebook is expecting this situation to change soon, but it will take some time for investors to come back and help the company increase its market share value. 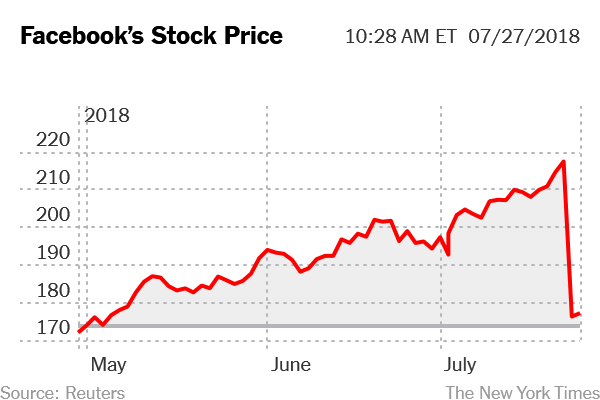 The company’s shares could recover over time, let’s just remember that after the whole Cambridge Analytica scandal broke out, Facebook shares fell 17% but it had recovered by the time May had come.