Exynos 8890 benchmark may literally be incredible

If you decide to get a Samsung Galaxy S7 next year, you’ll have to deal with what our friends with the iPhone 6s and iPhone 6s Plus had to earlier on this season. Samsung is said to only have production capacity for so many Exynos 8890 chipsets that it will only appear on half of all S7 units. The other half will get the Snapdragon 820. 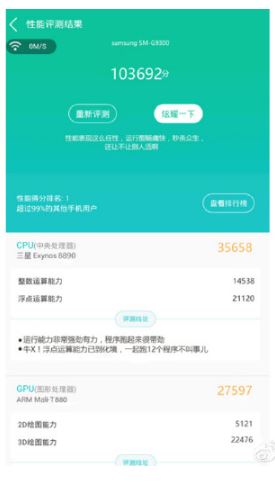 We’ve the former get benchmarked on GeekBench with some pretty outstanding results. But the Exynos 8890 has very little to stand on with a recent result from a Chinese test.

The comparable Kirin 950 put up an average score of 65,179 while the Exynos 7420 stood at 63,407. In fact, processor score jumps from generation to generation have never touched 10,000. We’re also looking at the SM-G3000, a Chinese variant that is likely to receive the Snapdragon 820 and not the Exynos.

While we have no specific evidence to be able to confirm that this one’s a fakie, we remind you that benchmark scores can definitely mean less than you think they do.