Sometimes, all you need is a phone. Not a digital assistant, not a pocket internet tablet, not a gaming platform.

Of course all of those things are nice, and the enhanced features smartphones bring to bear have become essential to millions around the world. But thanks to the realities of battery endurance and processor capabilities, most of today’s smartphones offer a variation on the same promise: “From the moment I come off the charger until the moment I lose power, I will be a smartphone. Nothing less.”

With the unsubtly-named Extreme Power Saver feature, HTC looks to change that reality on the new One M8 – by temporarily hobbling one of the world’s most advanced smartphones. We gave the all-new aluminum flagship the full review treatment last week, finding it to be a potent combination of competence and quality, but we were unable to test the new battery-saving feature until this past weekend. Here’s how it went. 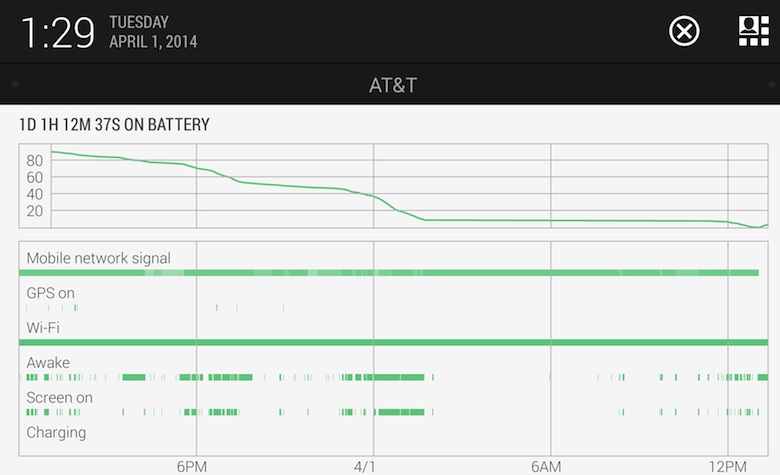 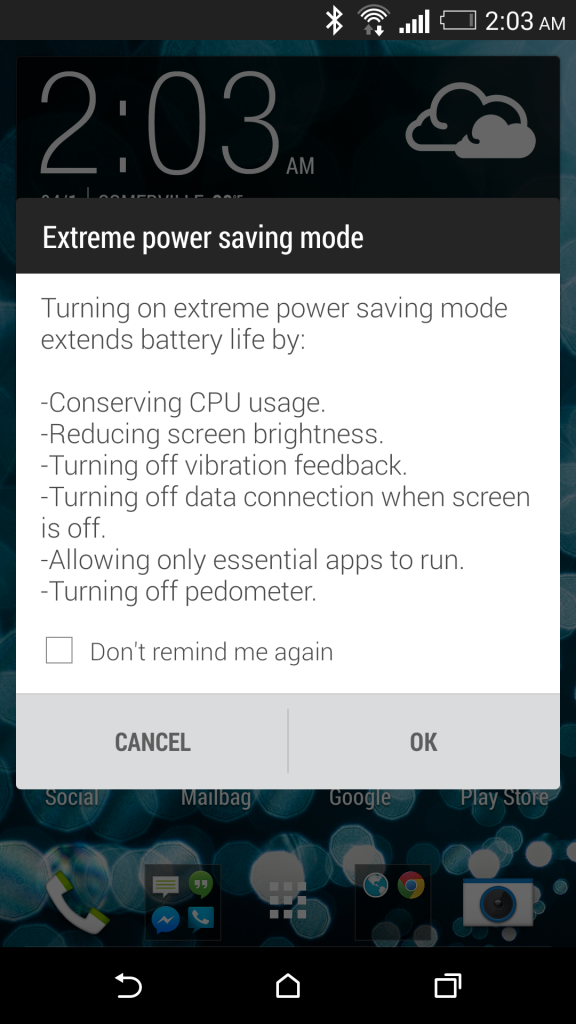 As hinted by its straightforward name, Extreme Power Saving is in some ways just a beefed-up version of HTC’s existing Power Save Mode. But where the latter stops at the usual measures of conserving CPU power, reducing display brightness, nixing the vibration motor and disabling data when asleep, Extreme Power Saver goes much further.

When enabled, either by a preset power threshold or by manual switch, EPS takes all of the above steps (and it also powers down the One M8’s pedometer). Then it activates a reduced-power mode which “allows only essential apps to run.” And the list of apps it deems “essential” reads like a midrange dumbphone’s spec sheet from 2003: you get Phone, SMS, Email, Calendar, Calculator, and a Clock. That’s it. And lest you go thinking that email app is something handy like Gmail, think again – it’s the stock HTC Email app, and it only syncs manually.

EPS takes extra measures to reduce power consumption: it disables the listen commands for the screen’s gesture wakeups, leaving the power button the sole means of waking or sleeping the device. It also turns off access to the notification shade, so there’s no way to “sneak in” to more entertaining or powerful corners of the device. The only way out is the big red “Exit” button on the lower right, after which all your fun returns … for as long as it lasts, anyway.

HTC claims this aggressive power management approach results in a standby time of 30 hours on a 10% battery charge (or up to 2 weeks of standby on a full charge). 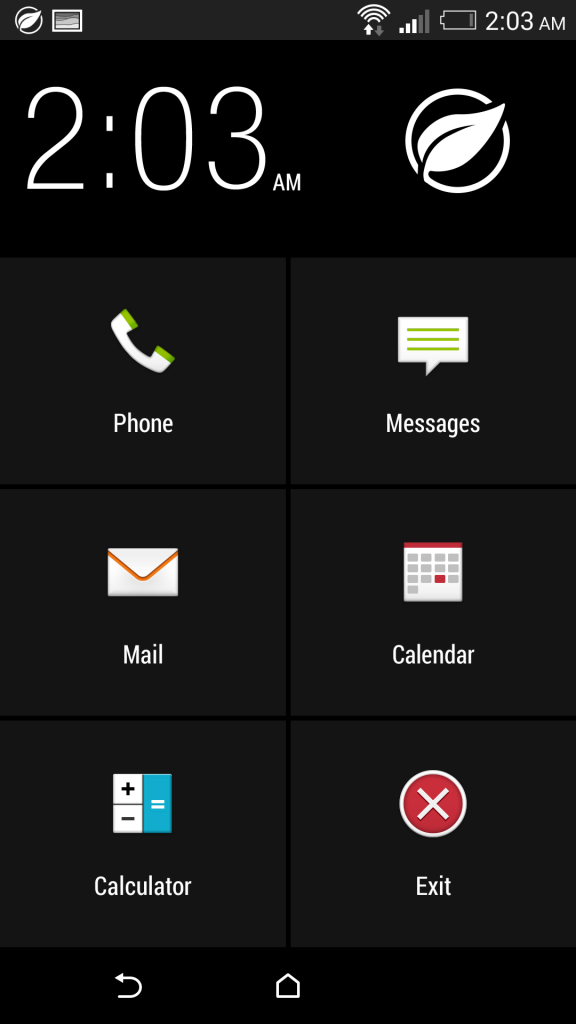 I tested Extreme Power Saving by manually activating it at 2am on Tuesday once my battery had fallen to 9% – just a percentage point shy of the low-water mark HTC calls out in the One M8’s Reviewer’s Guide. The phone immediately dropped into bare-bones mode and I plopped it down on my nightstand, where it sat untouched until around 8:30am the same morning. I noticed the phone’s battery had lost just a single percentage point, falling to 8% over those 6.5 hours. The device seemed perfectly content to sip power in standby, but I wanted to see how much use I could get out of it in EPS mode before it completely gave up the ghost.

As it turns out, that’s a pretty tough thing to do with a smartphone whose features have been completely hobbled. There was no Twitter to mindlessly surf, no camera to fire up for a quick selfie. I had only the most basic dumbphone features to carry me through. Fortunately, I also had some business that could be done via voice and SMS, so I put the device to as much use as I could:

At one point, I found myself in a situation that required me to look up a phone number which I didn’t have in my address book. Reasoning that the average person would rather quickly hop out of Extreme Power Saver for a Google search than spend the money on a 411 call to Information, I disabled EPS for 30 seconds to do just that (and was immediately smacked with a low-power warning for my trouble).

The One M8 finally surrendered at 1:12pm, its battery completely exhausted. All told, Extreme Power Saved had netted me just over 11 hours of “use,” 6.5 of which were spent in standby.

That’s not too bad, considering the phone would have died well before sunrise if left with its power-saving features turned off. Also, if I’m ever in a charger-less situation where my device is my lone lifeline to the outside world, you better believe I’m not going to be wasting precious milliamps changing calendar appointments. Used for its intended purpose in “Extreme” situations, I have little doubt that EPS could come in extremely handy in a tight spot.

That said, I did see some odd behavior which, if eliminated, would probably further extend the M8’s endurance.

The first oddity I came across was the WiFi radio, which was left on when I triggered EPS mode. At first, this made sense: I was connected to my home WiFi network when I activated Extreme Power Saving, and sticking to the short-range connection was likely more power efficient than relying on 3G cellular data. But when I left the house and exceeded the range of my home connection, the WiFi radio stayed on. With no access to the settings menu while in EPS mode, I was forced to watch the WiFi radio search in vain for another WAN connection until the phone finally died. After the test was complete, I disabled WiFi and activated EPS again: the Extreme Power Saving mode didn’t automatically activate the WiFi radio, so I assume EPS just notes the condition of the WiFi toggle when it’s activated and leaves it alone. That’s one way to go about things, but the device would probably save some juice if it could dynamically switch the WiFi radio off once signal is lost.

The second peculiar symptom was the frequent presence of the sync arrows in the notification area. Every few minutes the arrows would appear in their dog-chasing-tail circle, informing me that some app was trying to synchronize data with a cloud service. But with the email client being set to manual mode and most other EPS features not requiring data, the only culprit I could point to was the Calendar – and my one meeting appointment change certainly didn’t justify the near-constant sync the icon indicated.

It’s possible the EPS mode is designed to allow a limited sync upon screen-wake, or that a third-party app somewhere in the background wasn’t playing by the rules during my test.

Update: HTC has informed us that both of these behaviors are normal for Extreme Power Saving mode. According to the company, the syncing I saw as excessive is “very limited,” and “should have very little impact on the battery.” As for the WiFi radio being left on, that’s by design as well (to allow for data sync when near a hotspot), but the company “is taking into consideration whether to turn this off in a future update.” 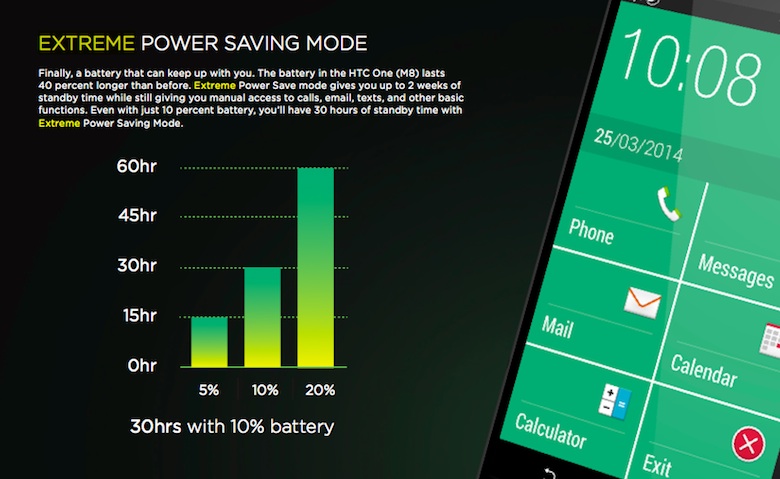 Odd behavior aside, Extreme Power Saving is a feature I’d much rather have than go without. Stripping down a smartphone to its bare feature-phone essentials isn’t fun –in fact it’s bound to be downright unsettling for the ultra-connected among us– but its utility is obvious to anyone who’s ever had the shocking realization that they’ve just embarked on a day/weekend/week-long trip without packing their charger. For those folks, Extreme Power Saving is bound to be a lifesaver – one that will only grow more useful as the bugs get shaken out.

Discover Samsung is still going strong with amazing discounts. Today you can grab a new Samsung ‘The Frame’ smart TV for as low as $530