There are even more ASUS tablets announced at Computex 2013, as the company is unveiling them one after the other. Read about them here!

There are even more ASUS tablets announced at Computex 2013, as the company is unveiling them one after the other. First up we have the ASUS Transformer Book Trio, which brings the best of both worlds to consumers: we’re looking at a convertible running both Android and Windows 8. It has a 1080p screen on an 11.6-inch form factor and can run either Android or Windows 8. For that to happen, it uses either one of its two processors: a 2GHz Intel Atom Z2580 chip for Android Jelly Bean, and an Intel Core i7-4500U processor for Windows 8 experience. There’s a 1TB hard drive and dual batteries: 33Wh and 19Wh one. Pricing is not known but expect this bad boy in the third quarter of the year.

Android-only, this time, on the ASUS MeMo Pad HD 7, a tablet with an exceptional price-point: $149 for the 16GB variant and $129 for the 8GB flavor. Specs include a seven-inch screen with 1,280 x 800 resolution, quad-core CPU (Cortex A 7), and a pair of five-megapixel and 1.2-megapixel cameras for back and front, respectively. 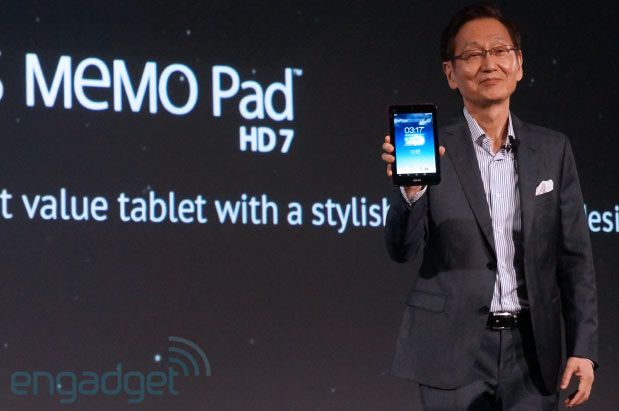