It’s not up for grabs yet, but DxOMark says the newly unveiled Samsung Galaxy S9+ has the best camera on a smartphone today.
Published 01 March 2018, 05:22 EST

The full Samsung Galaxy S9 and S9+ reviews are not in yet, as the two impressive new phones unveiled just a few days ago are set to go up for pre-order tomorrow, and only start shipping on March 16.

But somehow, the camera experts over at DxOMark managed to already put the larger version through a series of comprehensive tests, including 1500 stills and more than 2 hours of video shot both in controlled lab environments and in natural indoor and outdoor scenes.

With not one, but two 12MP rear shooters in tow, the first of which offers innovative variable aperture technology, plus dual OIS, dual-pixel PDAF, 4K video recording at 60fps, and 720p super-slow-mo capture at 960fps, the Galaxy S9 Plus predictably aces this paramount exam.

Greatly improving on the 88 score of a Galaxy S8 described as having “high photo potential”, as well as the 94 points racked up by the Note 8, deemed the world’s “best smartphone for zoom” back in October, the S9+ is the new overall leader of the DxOMark mobile chart.

Edging out the 98 and 97 scores of the Google Pixel 2 and Apple iPhone X respectively, Samsung’s “next big thing” tallies 99 points, even though its video prowess is only rated at 91. 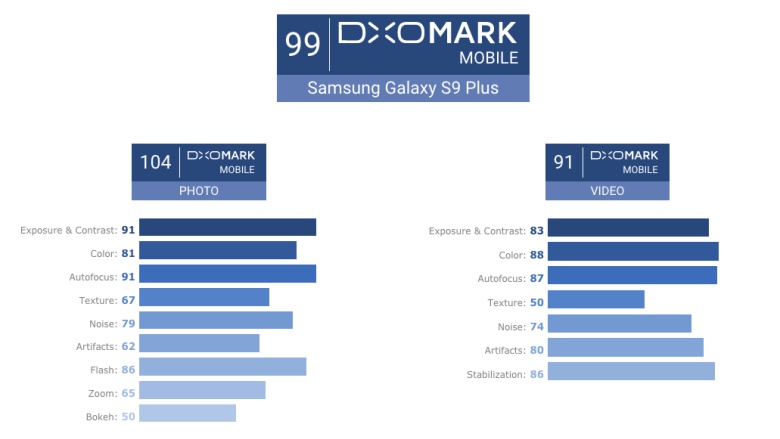 Yes, DxO’s rating system can be a little confusing, but one thing’s crystal clear. The Galaxy S9+ is unrivaled when it comes to photography-taking skills, scoring 104 points, with top-notch performance in any lighting scenario.

The dual aperture feature truly makes a big difference, helping produce the world’s brightest snapshots in dim conditions, as well as the sharpest, most detailed photos in sunny conditions. There are no “obvious weaknesses” here, although naturally, not everything is perfect. Artifacts can be a (minor) problem for bright-light images, exposure is “occasionally” unstable, while the video recording experience is impaired (a little) by loss of fine details in “most conditions”, as well as “visible residual global motion.”

Still, when all is said and done, the Galaxy S9 Plus has the world’s best smartphone camera, at least according to this particular analysis group.