The new Droid Ultra line: three awesome features we want in every phone

The new Motorola has arrived … or something like that. The Moto X still isn’t officially official, although we received an invitation to an August 1st press event titled Moto X. But today, in a joint press event with Verizon, three new Motorola handsets were announced: Droid Ultra, Droid Maxx, and Droid Mini.

Gone is the RAZR branding, to no surprise, but Motorola hasn’t severed ties with its penchant for thinness. The Droid Ultra is an impressive 7.18mm thick, the Maxx is 8.5mm thick, and the Mini is 8.9mm thick. And with exception to dimensions, display size, storage, and battery capacity, all models offer the same specifications: 2GB RAM, 10-megapixel Clear Pixel camera, and 720p displays. The Mini offers a 4.3-inch display (342ppi), while the Ultra and Maxx are 5-inches (294ppi). All three come with AMOLED panels, which are, thankfully, not PenTile. They also offer the Motorola X8 Computing System – a 1.7GHz dual-core application processor, 400MHz quad-core GPU, and dedicated processors for natural language and sensors.

That’s a lot to take in and, once you parse through the specifications, there’s nothing terribly noteworthy or mind-blowing. The X8 Computing System is unique, and we’re interested to see how it fares against comparable chips. But, on paper, the new Droid line is, more or less, modest – not drastic.

However, we’ve been saying all along that specifications aren’t everything. And with the new Droid lineup, that’s quite evident. The value proposition with these devices lies within their very stock-like software.

Without drastically changing the way stock Android looks, Motorola put its own spin on the operating system, and added a handful of new, useful features every smartphone in 2013 should come with. 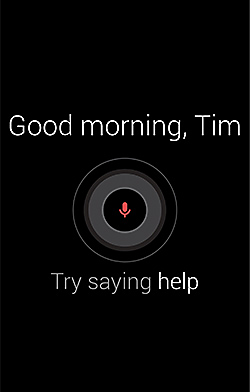 Let’s circle back to that Motorola X8 Computing System for a minute. What is it, exactly? We can’t answer that question fully just yet. But we do know it comes with a nice bag-o-tricks.

The most prominent of those is Touchless Control. Saying “Ok, Google Now” – even with the phone in standby, laying on a table – will wake the phone up and queue a Google voice search via Google Now. Further, the phone learns your unique voice, meaning wise guys and passersby will not be able to wake your phone either accidentally or on purpose.

Best of all, this always-on listening will not completely devour your battery. That’s where the X8 Computing System comes into play. There is a dedicated, low-power processor for natural language. The phone listens for your voice at all times, parses it locally, and once it’s accepted the input as yours, it waits for further instructions.

Quite cool, if I say so myself.

Another awesome feature announced for the new Droid line is Active Display, a feature that takes notifications in standby to a new level.

Currently, if your phone has a notification LED (most of which do), the LED will flash, relentlessly, until you turn on the phone and dismiss the notifications. On iOS and other operating systems, the display fully lights up, which can be detrimental to your battery life if you receive a ton of notifications.

With the new Droid line, new notifications are displayed by turning on only a small portion of the display. On top of that, black pixels on the AMOLED displays are turned off, meaning only the white text and icons are turned on.

This means you get extended notification information as useful as the screen turning on with an iOS device with roughly the power draw of a blinking LED (or potentially less).

Who doesn’t love useful shortcuts? On various TouchWiz devices, Samsung has offered a camera gesture shortcut from the lock screen – press and hold the lock screen while rotating the phone to landscape. After a short pause, the phone unlocks and opens straight to the camera.

The Droid Ultra line offers something between a hardware shortcut and the Samsung lock screen gesture. With the phone on standby, flick your wrist backwards twice and the phone immediately wakes up and jumps to the camera app. 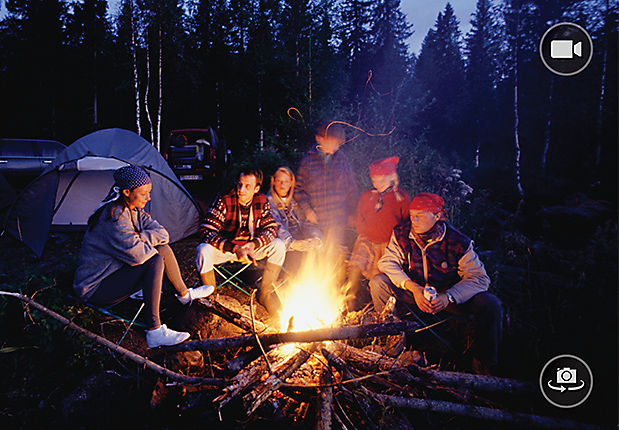 But how does it do this without killing your battery? Once again, X8 Computing System is to thank, once again. The second dedicated processor is for sensors, or “contextual computing” as Motorola calls it. This low-power core keeps the sensors active without chewing through battery life.

Once you get in the camera application on these devices, the interface looks even more clean and open than the stock Android camera app. There are only two soft buttons displayed atop the viewfinder – one to switch to video mode, and the other to toggle between front and rear cameras.

However, it offers the one-tap shutter option (which I’ve, personally, never liked) and quickly accessible settings via a swipe in from the left edge of the display – a la Pie Controls.

None of these new features will blow anyone away. They’re not meant to. But they are indicators of a couple things: smartphones are getting smarter and Motorola is once again innovating and thinking outside the box.