Is a 21MP sensor enough to overcome Motorola’s rep for ho-hum cameras? Find out with these DROID Turbo camera samples from our first day with the device!
Published 29 October 2014, 18:40 EDT

Motorola has never been known for its terrific camera performance. I’ve always appreciated the company’s other specialties: its robust hardware, its aggressive styling, and (recently) its innovative software … but from my first-ever Motorola smartphone to my current daily driver the Moto X, the camera’s never made the list of favorites. I’ve never seen a great photo opportunity and said “Quick! Bring my Motorola phone!” There’s always been a smartphone with a better camera, if not nearby then at least on my mind.

That’s a situation Motorola looks to change with the DROID Turbo camera, a 21MP f/2.0 module with a dual-LED flash and 4K video recording capabilities. There’s nothing exotic like optical image stabilization, dedicated depth sensors or lasers here, but Motorola made a point of improving its software-side augmentation with this device. Combining its own revised tone mapping with the improvements to the Image Signal Processor in the new Snapdragon 805 processor has resulted in reduced noise, faster focus, and better low-light performance … according to Motorola, that is. 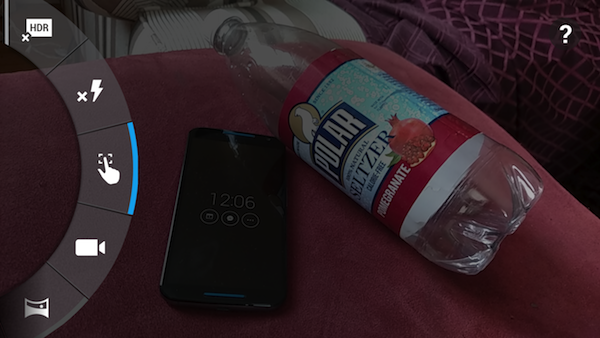 Do those upgrades translate into real-world improvements? Early indications are inconsistent. You can definitely see an uptick in clarity and sharpness in daylight and nighttime alike, and in the latter category the Turbo does let in more light than previous efforts. The improved software stabilization is very evident (and very welcome) in camcorder mode, and whether you’re shooting stills or video, the double-twist-to-launch-camera gesture is as handy as ever. Shooting is still not as easy as it could be without a dedicated camera key though, and captures take longer than they do on the second-gen Moto X even at the Turbo’s default shooting resolution of 15.5MP. In addition, HDR images do show some ghosting effects, brightly-lit elements of dimmer shots are still prone to overexposing, and grain is also very evident in low-light video at 1080p.

None of our complaints so far mean the DROID Turbo camera is bad; it just means it suffers from the same limitations as many other smartphone cameras. We’ve only got a day’s worth of testing under our belt so we’ll leave the solid conclusions to our full review coming next week. Until then, we’ll leave you with the below samples; check them out and let us know what you think in the comments below, and be sure to swing by the October 30 recording of the Pocketnow Weekly podcast where we’ll be answering your DROID Turbo questions live on the air!

Bad news for Pixel 2 and Pixel 2 XL users, as their devices will lose support by the end of this year