It sure looks like the Droid Maxx 2 won’t be the only long-battery-life Motorola smartphone hitting Verizon next week, as a new Droid Turbo 2 leak hints.
Published 22 October 2015, 18:05 EDT

With Verizon and Motorola’s Droid launch event just days away, info on the new phones about to debut has really been heating up. When we’re not checking out the official teasers Verizon’s been dropping, we’re taking a look at leaked back panels in Motorola’s signature array of colors and materials. As we wait for next Tuesday’s announcements, we’ve got another leak to peek at today, with the publication of what appears to be an internal flyer promoting the Droid Turbo 2’s arrival.

The Droid Turbo 2’s “shatterproof” screen gets a call-out here, just after starting in that last Verizon video teaser. There’s once again confirmation of the phone’s 21MP/5MP camera configuration, details we’ve been hearing about since early summer.

Mention of an impressive 48-hour battery life seems to fit nicely with what we’ve heard about a 3800mAh battery, and with quick-charge support, users can hope to get the better part of a day’s charge with just 15 minutes plugged into the outlet.

In addition to the Droid Turbo 2, the October 27 launch is expected to also bring us the Droid Maxx 2, equipped with its own 48-hour capable battery. Between the two of them, next week is sure shaping up to be a good one for Verizon users interested in long-lasting phones. 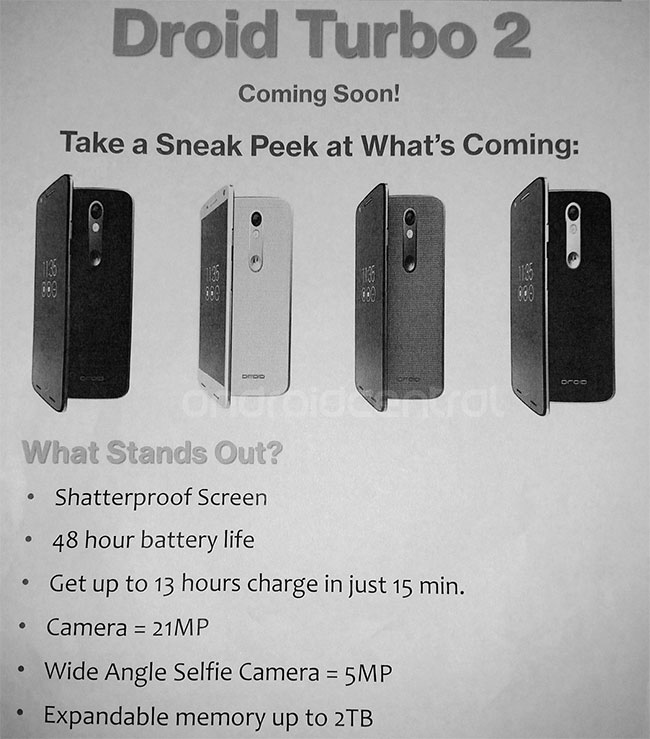 We expect it to roll out to the stable version soon.