October’s nearly done, but we’ve got a few more big smartphone launches to go before we call the month a wrap. Today it’s Verizon and Motorola’s turn to share their latest handsets with us, and we’ve heard a lot about what to expect. With the launch event now underway, we finally start getting confirmation of these new Droids that have been so thoroughly teased, and we’re getting started by meeting the Droid Turbo 2.

The Droid Turbo 2’s shatterproof screen has been featured pretty heavily in Verizon’s recent promos for today’s event, and Motorola wasted no time in showing us just how serious it is about the phone’s rugged construction, as company president Rick Osterloh stepped out to drop the Droid Turbo 2 on a hard concrete surface – with no visible damage. Motorola calls its system ShatterShield, combining the strength of an aluminum frame with a flexible OLED screen and redundant touch sensors for a reliable, hard-to-damage display. 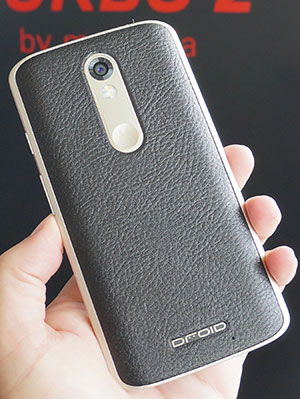 The Snapdragon 810-powered Droid Turbo 2 picks up a 5.4-inch quad HD screen, 21MP main camera (with 5MP wide-angle front-facer), and as we were told to expect, it packs a pretty large battery: the phone’s 3760mAh cell promises up to 48 hours of battery life. There’s plenty of on-board storage with 32GB and 64GB options, and users are free to augment that via microSD expansion.

Sales of the Droid Turbo 2 get started nearly straight away, with availability beginning this Thursday. Verizon’s offering up to $300 for trade-ins toward the phone, and will even accept models with cracked screens – if only to highlight the Turbo 2’s ShatterShield tech. Pricing comes to about $625 for the phone’s 32GB edition, or $720 for 64GB.

That premium price for the 64GB version doesn’t just buy you extra storage: you’ll also be able to re-configure the phone’s look in Moto Maker once within the first two years of ownership, giving you a fresh start and helping to keep your new phone from getting stale with age.