Verizon DROID Maxx 2 Review: MAXX is the proper word to describe it

f you’re a Verizon Wireless customer and the DROID Turbo 2 isn’t for you, the DROID Maxx 2 is the next in line.

“It is obvious that this contest cannot be decided by our knowledge of the Force… but by our skills with a lightsaber.”

One of the best things Verizon Wireless ever did was acquiring the rights to use the word “DROID” to differentiate its Androids from phones from its competitors, and one of the latest phones to carry the DROID name is the DROID Maxx 2, made by Motorola. In our Verizon Motorola DROID Maxx 2 review, we’re taking a close look at this brand new device on Big Red. Motorola made some compromises on this device, but did it keep the DROID Maxx 2 worthy of Verizon’s Android brand. The answers after the jump!

Back when Verizon’s original DROID Turbo was making waves, Motorola came up with a similar phone that could be sold outside of the Verizon ecosystem. They called it the Moto Maxx.

This year Verizon picked up the DROID Turbo 2, which features raw-power and a “shatterproof” screen (with a price tag to match). To make sure those without deep pockets still had a respectable, DROID-branded phone to choose from, Verizon’s offering a second one: The DROID Maxx 2. 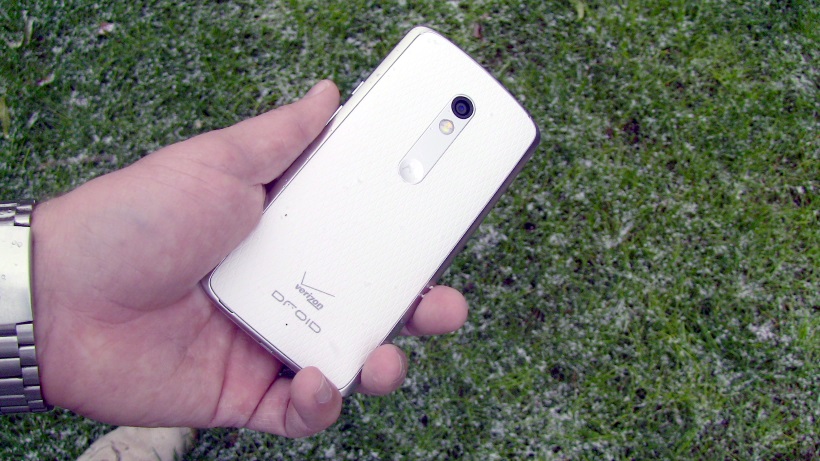 When asked about the naming of the DROID Maxx 2, Motorola’s CEO said it stands for “maxx battery, maxx megapixels, and maxx value”. We’ll see about that.

It’s got a 3630 mAh battery that Verizon claims will keep you “powered for up to 48 hours”. In practice, that number seems pretty accurate. In our experience with moderate to heavy use, the battery will get you through at least a day and a half. After more than 24 hours on our current charge, we’re still at 30% battery remaining (an estimated 18 hours). 10% of that has been with the screen on.

The battery size isn’t the only contributor to the great time between charges, the DROID Maxx 2 is powered by Qualcomm’s Snapdragon 615 processor, which is on the high-side of Qualcomm’s middle-tier SoCs. While we’d have loved to see a Snapdragon 810 under the hood, the 1.7GHz octa-core 615 will have to suffice – and is a bit nicer when it comes to power consumption.

The DROID Maxx 2 is basically a re-branded Moto X Play in terms of size. It’s 75mm wide x 148mm tall and curves from 6mm thick on the edges to 10mm on the back. That curve, as with other Moto’s before it, fits nicely in the hand, and it feels great – though a little flimsy at times. It’s solid and substantial, without being heavy (169g). The power button is on the right side and is ridged to help you find it easily, with the volume rocker just beneath.

The silver ring around the phone isn’t really metal, it’s just painted polycarbonate, but it looks pretty snazzy. The backplate is removable, though the battery beneath it is not. This means you’ll be able to change out your back cover to suit your whimsy, but there’s nothing you can get to underneath it. Even the nanoSIM and microSD card are in a tray at the top of the phone – not under the cover. That sd slot is something we really like. It can take your 16GB onboard storage and suppliment it with cards up to 128GB – sold separetly, of course.

Just like other Moto’s in the family, the centerline dimple is a comfortable anchor point for your fingertip. Alas, that’s all it is – there’s no fingerprint scanner hiding beneath it, meaning you’ll need to set up a trusted device (like a smartwatch or Bluetooth headset) to keep the phone unlocked, or revert to a PIN, Pattern, or Password to keep your phone secure.

Once you’re in, the screen looks nice. Bezels are minimal, and unlike the DROID Turbo 2, there’s no ugly carrier logo polluting the front (you’ll find it on the back, but that’s a much more acceptable location. The screen is LCD, not AMOLED, and measures 5.5-inches @ 1080p, giving the phone a pixel density of 403 ppi. It’s topped with Gorilla Glass 3 – not the “Shatter Shield” screen the Turbo 2 gets. Don’t try stepping on this phone with a horse, or anything crazy like that.

Rather than making the jump to USB Type-C, the Maxx 2 has a microUSB port on the bottom which is capable of Turbo Charging, which is a good thing. Unfortunately, it it doesn’t include any type of wireless charging support.

The software running on the DROID Maxx 2 is a “Motorolified” version of Android 5.1.1 Lollipop – sadly, there is no Marshmallow out of the box. It comes with most, but not all, of the added features Moto’s are famous for, including our new favorite Motorola app: Loop, Motorola’s app to help you stay in sync with your home and family, including support for Nest thermostats and Philips Hue lights.

On top of that, Verizon has added an impressive amount of bloatware to the DROID Maxx 2: well over a dozen, not including the Moto apps. 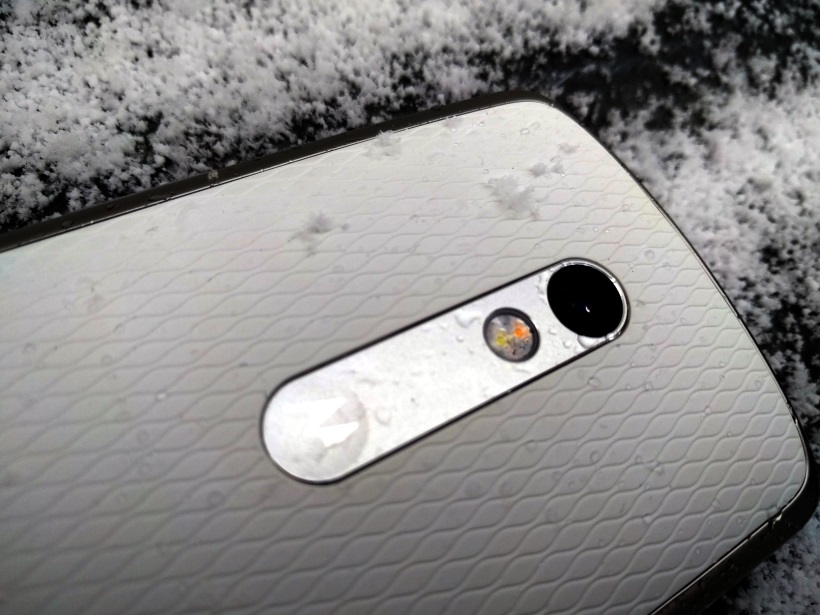 The camera on the DROID Maxx 2 is pretty decent. With 21MP, an f/2.0 aperture, phase-detect autofocus, dual LED flash, and very capable HDR mode for both stills and video, we were impressed with how well pictures turned out.

No, the camera itself isn’t great, but for a midrange phone, it’s not half-bad.

Overall performance with the Maxx 2 was perfectly acceptable, and on par with what we have experienced with the similarly spec’d Nexus 5X. The Snapdragon 615 processor can get bogged down at times, but only very occasionally in our experience.

We weren’t able to try out the advanced calling features (HD voice and video calling) but traditional phone calls were great, with neither party complaining about clarity or call quality. LTE speeds around the Pocketnow Utah offices were pretty decent for our area, with a ping below 70ms and speeds over 18Mbps up and 8 down, and WiFi performed well on both 2.4 and 5GHz, despite the fact that AC isn’t supported.

– Only available with 16GB on-board storage (no 32GB or higher options)
– No wireless charging support
– Removable backplate has too much “play” in it
– Far too much Verizon bloatware
– Only ships with Android 5.1.1 Lollipop – not Marshmallow 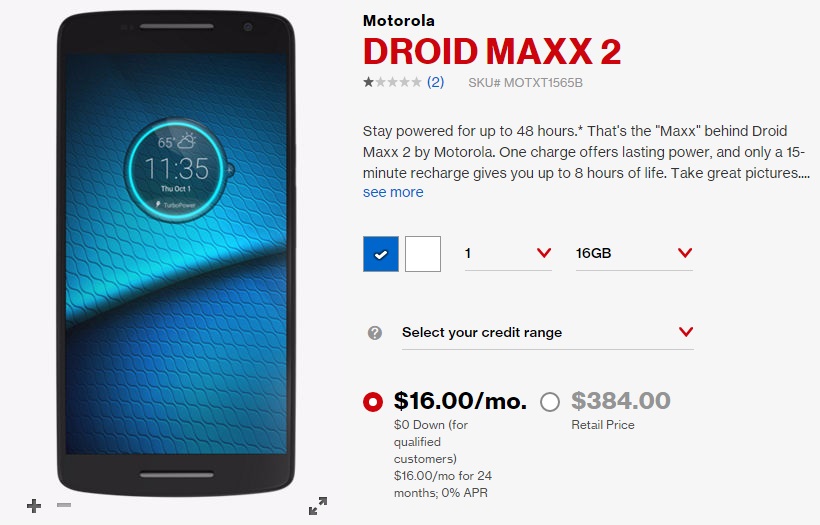 The DROID Maxx 2 is a carrier exclusive on the Verizon Wireless network in the States. You can pick one up for US$16/month (for 24 months), or for the full retail price of $384, and is available now from Verizon’s website and select Verizon stores. 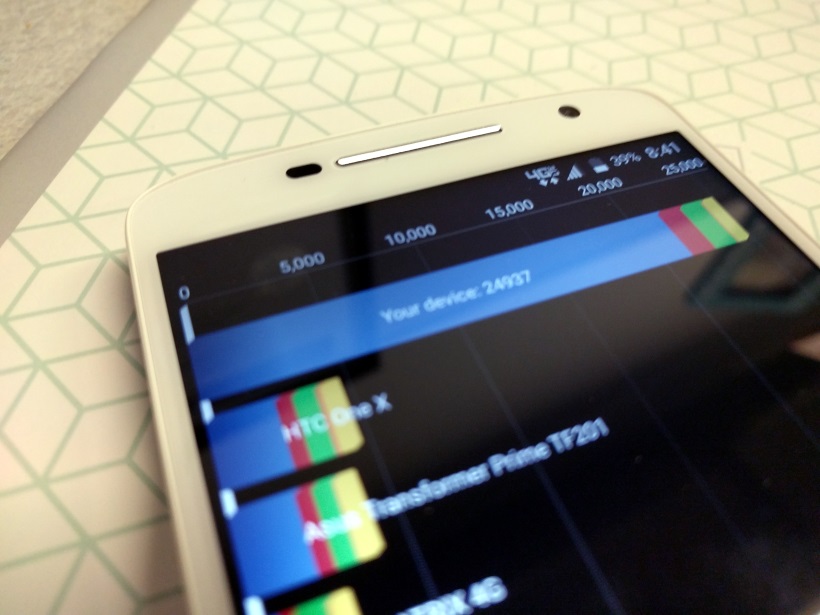 The DROID Maxx 2 isn’t a flagship, and it’s not going to win any competitions against them. However, it is a very viable mid-range phone that performs right where we’d expect it to. It feels nice, performs well, and lasts at least all day and all night.

It’s not as high-end as the DROID Turbo 2, doesn’t feature the “Shatter Shield” screen the Turbo 2 has, doesn’t include wireless charging (in any form), and is only available in a 16GB configuration. While these are minor inconveniences, they’re a little disappointing on a new smartphone – especially one under the DROID label.

Nonetheless, if you’re a Verizon Wireless customer and the DROID Turbo 2 isn’t for you, the DROID Maxx 2 is the next in line.

We have new leaks that give us a full list of the specs in the new Huawei P40 and P40 Pro, along with their possible price